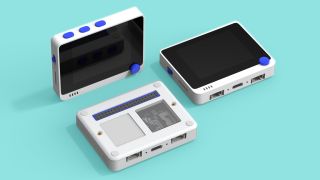 IoT hardware developers at Seeedstudio are releasing a new microcontroller compatible with the Raspberry Pi known as the Wio Terminal this April. It's a standalone device that can easily be integrated with the Pi ecosystem—even functioning as a HAT for the Raspberry Pi, allowing for connection via the Raspberry Pi's GPIO pins.

The Wio Terminal is the latest edition in a line of devices that began in 2015. It succeeds models like the Wio Link and Wio Node. Unlike previous editions, the Wio Terminal has far more features and is more like a single-board computer (SBC). It uses an ATSAMD51 for processing and can reach operating speeds of 120 MHz and 200 MHz when boosted.

The Wio Terminal's on-board sensors make it fit for Raspberry Pi projects. These include a built-in light sensor and IMU, as well as an infrared emitter (IR 940nm).

While the Wio Terminal can act as a slave device for the Raspberry Pi, it's worth noting it's compatibility with other systems. This board will work with Arduinos, ArduPy and MicroPython too.

If you'd like to get your hands on the Wio Terminal it's available for pre-order at $29.90 (€27.87) on the company website. According to Seeedstudio, orders will ship on April 15.

You can see more details in Seeedstudio's video below: