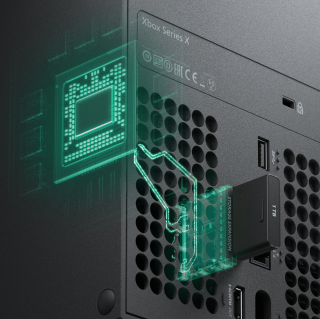 The Xbox Series X announced its hardware specs earlier today, which included an upgrade from the Xbox One’s internal HDD to a new internal SSD, along with the option to add external SSDs on top of that for extra storage, portability, and even performance. However, to do that, you'll need to buy a special proprietary 1TB SSD. Otherwise, the only other external storage available will be USB hard drives for games from previous generations, and even then, you might lose performance.

One of the major selling points Microsoft focused on in its specs reveal was increased performance for not just new games, but also Xbox One, Xbox 360, and even original Xbox games running on the Xbox Series X.  To that end, the console is introducing SSDs to replace the slower hard drives that the Xbox line has been using up until now.

At launch, the Xbox Series X will have a 1TB internal NVMe SSD, which Microsoft promises will allow gamers to suspend multiple games at once, as well as experience faster loading times in both new releases and older games like Assassin’s Creed Odyssey and Final Fantasy XV. This will supposedly be due to the Xbox Velocity Architecture, a new proprietary system for developers that Microsoft says will allow “100GB of game assets to be instantly accessible by the developer.”

This is where the external SSD comes into play. Built exclusively by Seagate and offering the same specs as the internal drive, this expansion card looks roughly like an update on old-school PS2 or original Xbox memory cards, and uses a proprietary connector.

The uses for this proprietary Seagate SSD are three-fold. The first, obviously, is to expand storage space on your console should your game library ever outgrow 1TB, which is more likely as increased complexity makes games larger. Second, it allows users to easily bring games across consoles, since cards will be swappable between systems. Finally, and perhaps most importantly, is that it allows any externally stored Xbox Series X optimized games, even older generation ones like Gears of War 5, to take advantage of the Xbox Velocity architecture- something they won't be able to do with an external USB drive.

“Previous generation Xbox titles can still be played directly from external USB 3.2 hard drives,” Microsoft promises in its announcement. “However, to receive all the benefits of the Xbox Velocity Architecture and optimal performance, Xbox Series X optimized games should be played from the internal SSD or Xbox Series X Storage Expansion Card.”

All of this comes at a price, though. While older generation games can be played off USB hard drives (if you're willing to lose performance on the Xbox Series X optimized ones), newer games will expect to be run off an SSD. And as of now, Seagate's proprietary drive is the only external SSD available and is likely to cost more because of it.

This means that owners won’t be able to expand their console’s storage for new games as easily as a Switch owner might, by simply swapping out microSD cards. Instead, they’ll have to buy Seagate's custom NVMe SSD, even if they don’t need a full terabyte of external storage. And with Seagate already selling 1TB PC NVMe SSDs for $199.99 and Xbox One USB SSDs for $214.99, that will likely be quite an investment.

With the Nintendo Switch running its games off of cartridges and now Xbox following suit with external SSDs, video games are making a clear shift towards storage mediums with faster loading times. An external SSD is a logical next step, but the cost associated with locking players down to one option as opposed to letting them use any external SSDs they already own might not justify the convenience of the plug-and-play slot.

We're curious if the internal SSD could be modded out, and if this move might encourage tech-savvy owners to opt for that instead.

19 Comments Comment from the forums
Be In the Know