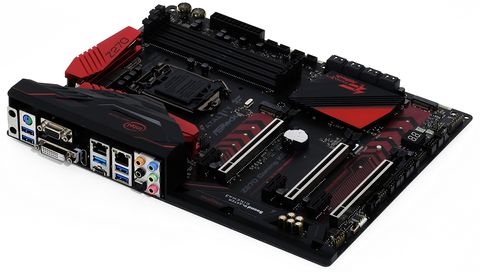 Offering a great set of features for the price and very effective overload/overheat protection, the Fatat1ty Z270 Gaming K6 is approved for non-overclockers. Core i3-7350K overclockers will likely also find it suitable, but only if they can find it within their budget.

Intel’s latest high-end chipset for mainstream sockets, Z270, adds four PCIe lanes via four additional HSIO connections compared to Z170, enabling motherboard designers to add extra slots, USB 3.0 ports, or even an extra PCIe 3.0 x4 based NVMe drive. It’s up to the motherboard manufacturer to determine where to put those extra four connections, but recent trends in enthusiast storage has pushed most companies to place at least two M.2 slots and an NVMe-capable PCIe x4 slot on their enthusiast-level motherboards.

ASRock gets around one of the HSIO limits by putting two of its four front-panel USB 3.0 ports on a hub, but all of the I/O panel ports remain at full bandwidth. These include two USB 3.1 ports, Type-C and Type A, on an ASM2142 two-lane PCIe 3.0 controller. Other I/O panel connections include four USB 3.0, two Gigabit Ethernet, five analog audio jacks, an optical digital audio output, VGA, DVI-D, and HDMI. An empty I/O panel antenna bracket is placed behind an empty M.2 Key E (PCIe 3.0 x2) Wi-Fi adapter slot.

Looking down from atop, we see the “Key E” slot’s security screw next to the top rear motherboard retention screw hole, as the slot itself is concealed by an I/O panel shroud. The shroud is RGB lit in two zones, the second zone under the Sound Blaster logo, and its RGB controller also interfaces surround lighting on the Z270 PCH sink and an Aura RGB LED output for strip lights.

All three x16-length PCIe slots have stainless steel covers, and all three PCIe x1 slots are open-ended to accept longer cards. The stainless covers use thinner solder points compared to a certain competitor's, but the two primary slots still have two slots of space between them to allow extra thick card coolers. ASRock leaves the first space under the top x16 slot empty, since a graphics cooler usually blocks it, and places an open-ended x1 connector above it. The open end would allow longer cards (such as x4) to fit, except that an M.2 drive will consume the extra space required for anything longer than an x1 card. The upper two stainless-shrouded slots share the CPU's integrated PCIe controller in either x16/x0 or x8/x8 modes depending on whether the second slot is filled, and the third x16-length slot is fed four lanes from the Z270 PCH.

That means users can still run three NVMe cards, since the two M.2 and the four-lane bottom slot are resource-independent from each other. The M.2 slots still share resources with SATA however, and the sharing disables two ports per installed M.2 card. ASRock hopes to alleviate concerns about missing ports by adding two of these via an ASM1061 controller, but that controller forces both ports to share the bandwidth of a single PCIe lane. Such are the limits of HSIO with the Z270, which have only become a concern due to M.2 popularity. Even if you don’t have M.2 drives yet, you probably want at least one.

The front-panel audio jack is stuffed into the extreme bottom rear corner, which could be a problem for a few builders since most cables barely reach this location. Next to that, a mechanical switch tells firmware to enable XMP memory mode, which may be best left alone if you’re running certain modules: This can also be enabled in firmware, where you can make any adjustments necessary to enable booting with super fast XMP-enabled memory. Of course XMP was designed to prevent that issue, but memory manufacturers are constantly pushing beyond motherboard limits on their highest rated kits.

The Fatal1ty Z270 Gaming K6 has five 4-pin fan connectors, but you can only manually select between PWM and voltage-based fan control for two of them. One of those connectors, labeled CPU_OPT/W_Pump, has an enhanced 1.5 amp rating for heavy duty liquid-cooling water pumps.

Other points of interest include lighted Power and Reset buttons above the 24-pin power interface, and the previously mentioned two USB 3.0 headers (supporting four ports) below it.

Next Page Z270 Gaming K6 Accessories, Firmware And Overclocking
9 Comments Comment from the forums
Be In the Know