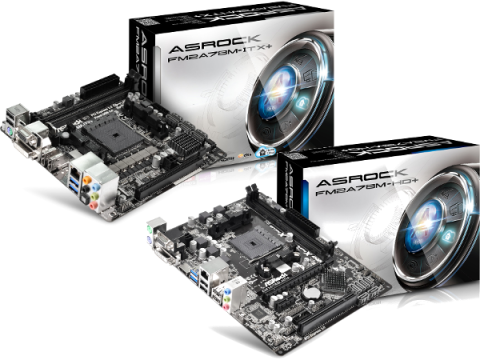 First up is the ASRock FM2A78M-HD+ R2.0 (or the HD+). This Micro-ATX board measures in at 9.25 x 7.25 inches and contains the usual back-panel connectors: two PS/2 ports, four USB2.0 and two USB3.0 ports, gigabit Ethernet, Line-in, front speaker and microphone jacks, and VGA, DVI, and HDMI connectors. Upon physical inspection of the product, I saw that an ELNA Audio sticker covers the audio jack connectors. Along with its placement on the sticker, the product name is clearly identified above the PCIe x16 connector, and the Rev 2.0 designation is silk screened onto the PCB.

On the bottom right of the board, six SATA connectors are tightly bunched together immediately next to the chassis fan connector, which might cause problems for those who deploy full SATA configurations or an expansion card in the bottom PCI slot. Moving up the right side of the board, I encountered the front-panel button connectors and the speaker, as well as the ATX 24-pin power connector. Two DIMM slots are very close to the ATX connector, so some high-performance memory DIMMs could pose a problem when routing the PSU's big bundle of cables. The top side of the board contains the CPU fan (PWM) connector and PSU (3-pin) fan connector, both of which provide ample clearance for cable management. Below the PSU fan connector, only one 4-pin 12V connector is available, for additional CPU power.

The packaging for the motherboard is full, on both the top and bottom, of marketing logos for ASRock's various features. Given the target price, the bundled cabling includes two SATA cables, support CD, and quick installation guide. Overall, I am quite pleased with this board's featureset and layout, so I look forward to seeing its performance.

The ASRock FM2A78M-ITX+ (or the ITX+) is the smallest board I've tested, measuring in at 7 x 6.75 inches. Packing all of these features into this small a footprint requires some concessions, however, this board also has features the other contenders have failed to provide. The back panel is where we get the most variance: I now have access to only 1 PS-2 connector for legacy input devices, but I gain an HDMI-In, an SPDIF Out and HD audio jacks. For an HTPC box, this appears to be the best out-of-the-box solution for critical HTPC requirements.

Since there are two inches missing on the PCB compared to the other MicroATX boards I've seen, this Mini-ITX board only has access to one PCIe x16 connector, and it is located on the very bottom of the board. With my setup, the GPU's heat sink hangs over the edge of the board, so keep that in mind when selecting components. Moving along the right side of the board, the SATA connectors are neatly lined up in two columns and seem a bit more organized than the HD+. Tiptoeing along the right side of the board, we come across our chassis fan connector (PWM) right below the DIMM slots and the front-panel pins. The topside has the ATX power connector in a similar orientation to the HD+, so DIMM selection will be critical. At the opposite end of the DIMM slots, the CPU fan connector is located right between the case screw and the USB panel.

In addition to the lack of real estate, ASRock rotated the APU socket by 90 degrees along with all of the voltage regulators and chokes. The company also removed the heat-sink bracket on the back of the board, so caution is required when using larger heat sinks. The chokes are also so close to the socket that my heat sink covered them and could prove hazardous to cooling. I would highly recommend installing a downdraft heatsink fan, especially if this is going into a smaller enclosure. Also, the 12V 4-pin connector is located between the regulators and the PCIe x16 connector, which turns out to be very awkward.

Deviating from the traditional ASRock type font, this packaging has a definite futuristic theme and emphasizes the style of this product. Will the enhanced featureset prove valuable to builders, or will the cramped configuration prove to be too much of a hindrance?

Prev Page Specifications, Firmware & Software Next Page How We Test, Results, Power, Temperature & Overclocking
16 Comments Comment from the forums
Be In the Know