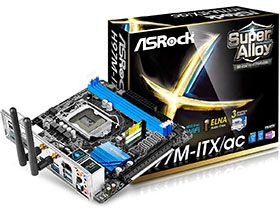 ASRock's H97M-ITX/ac rectifies some of the H81M-ITX's issues with plenty of SATA 6Gb/s ports, front-panel USB 3.0, wireless networking and decent audio. In the box, you get two SATA cables, a CD, manual, the wireless card, antenna wires and antennas, and the I/O plate. You also get a little metal bracket that screws to the board on one end and to the wireless card for support at the other. I'd like to see another SATA cable or two, but I suspect a lot of builders have boxes of them. The antenna wires run to connectors that are then bolted to cutouts on the I/O plate, and the antennas screw in on the outside.

This board also places the CLR_CMOS jumper to the right of the 24-pin power connector along the front of the board, not near the battery, but easy to reach. The wireless card takes up enough of the available space on the board that the battery is vertically mounted behind a couple of the rear panel’s USB3.0 ports.  It is the ubiquitous CR2032. The CPU fan header is on the right behind the PS/2 connector, and the chassis fan connector (a 4-pin PWM) is centered horizontally but toward the back, and nowhere near any cable management openings. Reversing those two would have made sense. Unlike the depiction on the [stock] photo above, the RAM slots have locking levers on both ends, so you can be sure your RAM is fully inserted. Since the SATA ports are not on an edge, but are left of the PCIe slot and behind the RAM, you will have a bundle of cables there if you plan to use more than a couple of drives. They are also aligned the same way, so if you’ve used locking cables, once they are placed, you may need to remove one or more in front of one you want to change to get at its clip. There is again no case speaker header. The single USB2.0 header on the board is behind the front panel header on the left front edge.  The USB3.0 header is between them and the power connector.  As usual, ASRock uses all solid capacitors and ferrite core chokes.

The initial UEFI screen looks a lot like that of its previously-discussed sibling, though perhaps a little more subdued:

Similarly, the OC Tweaker can easily bump the Pentium to a number of different performance levels. For me, 4GHz was stable using the Non-Z OC setting.

This presented the expected results:

Looking back at my past half-dozen builds, there's nothing I truly needed that isn't on this board. Sometimes I overclock, but I often run stock clock rates and use a single graphics card. Optical drive, system drive, and RAID 1 can all be accommodated. The $80 price isn't too bad either; a similar microATX board (minus Wi-Fi) goes for $70. Especially if you want a small system, there's nothing here not to like.

I learned another great lesson from this board. Moving its wireless antennas, which were originally placed behind the case, to someplace higher (away from the PSU) improved performance considerably. I ran multiple tests at different times, and saw much better throughput. Let's revisit the speedtest.net numbers:

Clearly, antenna positioning can be a really big deal. ASRock doesn't quite catch up to Gigabyte, but these are still solid results. Particularly with that notable issue out of the way, a summary of this board is that it’s small and includes excellent storage options (including RAID). It also includes front-panel USB 3.0, wireless networking and decent audio.