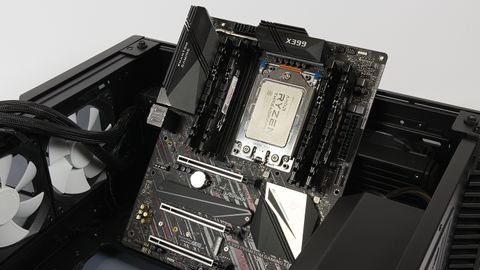 On our testbench, ASRock has been known for designing boards with above-average power efficiency. Things are looking good for the Phantom Gaming 6 at idle, and even turning on Prime95 for full CPU load we have impressive results. However, the GTX 1080 just decides to start pulling extra power from the wall at full load with FurMark, which tarnishes this ASRock’s power rating by upwards of 20W on average. Compiling that with our combined performance metrics, the Phantom Gaming 6 struggles, considering its only modest performance wins. We are left wanting more from the Phantom Gaming 6 overall, but maybe a different GPU or workload would be better suited for this system.

Now it's time to dig into the thermals. Judging by the product photos before, ASRock took a page out of our MSI B450 Gaming Pro Carbon review and decided to replace the plastic IO shroud with an overhanging VReg heatsink. Given the results from that board, we have high hopes from ASRock’s take on the design. After reading the marketing material for the ASRock board, these soldered heatpipes claim to enhance the thermal transfer across the entire regulator.

Our data show, however, that the VRegs located at the top of the board do not benefit from this hype. As stated many times in previous ASRock reviews, there just isn’t enough material or surface area in critical parts of this board to support extreme overclocking scenarios. We also noticed that the heatsinks shifted easily around the heatpipe as we dismantled the product for photography, which suggests insufficient bonding during assembly. But because this board only supports 180W processors and the X399M shows similar thermal results, this shouldn’t be a serious concern.

Those of you looking for that hot rod of a motherboard might get mixed results. The X399M sets the standard for this processor with both a 3975MHz processor overclock, but sets the minimum for memory overclocks with DDR4-3066. We mention that the reduced trace distances should have improved the interface’s timings in the X399M article, but that didn’t pay out with a respectable overclock. The Phantom Gaming 6 sets a higher data rate, but still does not rise to our expected DDR4-3200 memory speed.

As for the processor, we were unable to run for long by starting at 3800MHz before we hit a frozen screen. Zigzagging between increasing voltage and frequency, we walked Vcore from 1.15V all the way to 1.275V as we bump the multiplier in 25MHz steps from 3800 to 3950MHz. We would call that acceptable, but wanted to see how much farther this goes. Bumping the multiplier up to 4050MHz with our Cinebench looper workload showed that we clearly need more voltage. It takes nearly another 75mV of set voltage to get a stable 4100MHz with the looper, and that’s where we peg out the regulator's thermal safe point. This might suggest that Precision Boost Overdrive is a preferable overclock method for users that only need the periodic bursts of extra performance.