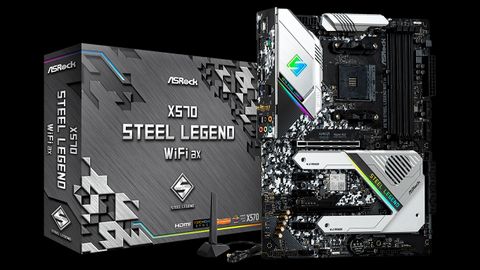 Since it has no impact on the CPU performance of AMD motherboards, we enabled XMP memory mode for all of today’s benchmarks.

The X570 Steel Legend WiFi ax starts a little slower than the pack in 3DMark, but progressively gains on its competitors until overtaking them in PCMark Productivity. After that it falters, to the point that MS Office shows a hard loss. Perhaps real-world benchmarks will look better?

The X570 Steel Legend WiFi ax beat all of its higher-priced competitors at every game setting. While those wins were marginal at best, that’s the kind of consistency that could have us forgetting about the earlier losses.

The X570 Steel Legend ax routs its competitors in the synthetic tests of 7-Zip and Cinebench, but only reaches mid-pack in our real-world timed metrics: While higher scores are better, lower completion time also means better performance.

The X570 Steel Legend WiFi ax uses quite a bit less power than its better-featured competitors, but though we’d like to credit its smaller set of controllers for the reduced consumption, we see that its margin of victory increases under full CPU load.

Budget builders  love a chart that compares price to performance without accounting for feature differences, so here it is: The cheaper the board, the better its performance-per-dollar.

Having said that, the X570 Steel Legend WiFi ax isn’t really in the same market as those other three boards. Including them allows us to verify that a cheaper board still offers the same level of performance and overclocking as its up-market rivals, but anyone who’s looking for better features probably isn’t considering this board.

The only added features we get beyond what’s offered by the X570 PCH are the 2.4Gb/s Wi-Fi controller, some onboard lighting, and some extra RGB headers. Yet it’s hard to argue that anyone’s paying much for the RGB, since the rest of this $200  board includes solid basics such as its 10x50A CPU voltage regulator. And if you don’t want to pay for the WiFi, ASRock offers an otherwise-identical X570 Steel Legend without that controller for $10 less.

The greatest sacrifice compared to the big boards is that the second x16-length slot has only four lanes, because the top x16 slot can’t share its lanes. Both viewpoints describe a basic design that eliminates a few pathway switches to save money: Anyone who didn’t need those pathways to be flexible will surely be fine with this.

The smallest sacrifice of this board’s design is probably that its two M.2 covers are built as a single unit that’s integrated with the PCH fan shroud. This means if you want to have a fan shroud, you won’t be able to install any M.2 SSD that has a heat spreader of its own. Uncovering a single M.2 slot while leaving the over covered is likewise not an option.

As value-conscious buyers are unlikely to choose an SLI graphics configuration or decorated SSDs, those last two things are hardly an inconvenience.

Prev Page Software, Firmware and Overclocking
10 Comments Comment from the forums
Be In the Know