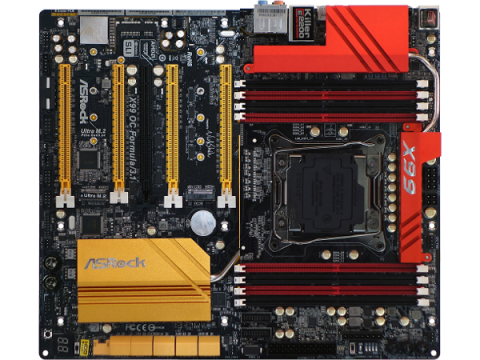 Performance Per Dollar is another metric where today’s sub-premium motherboards are forced to face the entire range of 15 tested boards, regardless of feature set or overclocking. Since performance doesn’t change much, this is primarily a comparison of a particular product’s price to the average of tested products.

ASRock’s $350 and $360 boards score less "performance per dollar" than $300 and $310 models, but better than a $506 board. Of course the most expensive board above includes a bunch of additional components to drive its also-included handheld overclocking controller. One of ASRock’s other competitors thinks that this should be the final score, but we like to look at what the extra ~$50 gets us.

The C7X99-OCE doesn’t have any M.2 interfaces, while both of today’s ASRock models include two (PCIe 3.0 x4 and PCIe 2.0 x2/SATA). And the C7X99-OCE requires a 40-lane CPU to support 3-way SLI, while both ASRock boards can do that with the 28-lane Core i7-5820K. ASRock leads by at least its price difference, and that’s before we consider its USB 3.1 features.

MSI’s X99S MPower competes most closely with ASRock’s X99 OC Formula/3.1, being the cheapest board to include slow-mode for LN2 overclocking. It even won our stamp of approval. The X99 OC Formula/3.1 needs to only offer $50 more value in features to match it, and we find those in its USB 3.1 controllers. Oh, and ASRock sockets its firmware, just in case a user somehow corrupts both ICs.

Compared to the other ASRock board, the Fatal1ty X99 Professional/3.1 upgrades to a Killer Network controller and includes a 3-month Premium service upgrade for XSplit Broadcaster/Gamecaster. Those two things must be worth $10 to the right buyers.