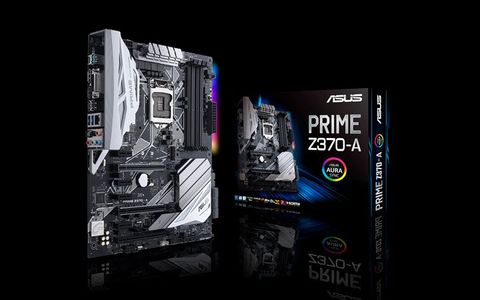 Asus put much of the DIP software’s focus in its “5-Way Optimization” automatic tuning program, which overclocks and stability-tests the CPU and runs a fan-tuning test to determine an optimized slope. The results of the report are spread across two pages of a small window that can’t be resized: Here are those two windows pasted together (and cropped).

A 5.1GHz overclocking result would be great, except that we never actually saw it “in action,” in part because the overclock includes a CPU multiplier reduction for AVX loads of 3x, and in part because even when we set only a two-core/four-thread load, the CPU would divide that load across all six cores at 6% to 60% loaded. That would again force the lower six-core “Optimized” overclock, along with the 300MHz reduction for AVX loads, with the expected 4.40GHz result. No big deal; manual tuning remains a viable option, but that can also be done in firmware.

Firmware is where the real overclocking fun begins, if not at this menu: The Prime Z370-A opens to an EZ Mode GUI, which gives users access to XMP, boot order, fan tuning, and automatic overclocking utilities. Pressing the keyboard’s F7 key brings up its advanced mode GUI.

Asus was one of the leaders in providing a “Favorites” menu, but we haven’t covered it often. It provides access to frequently adjusted settings.

Using Prime95 small FFTs, our CPU tops out at 4848MHz using a 1.30V core. Additional voltage needed to push it past 4848MHz in this application causes it to reach its thermal threshold and throttle back. With that limit in mind, we’re pleased to see any sub-$200 board push it to at least 4800MHz, so a high-five to the Prime Z370-A.

In the middle of the Ai Tweaker menu, the 5G OC Profile set our CPU to around 1.35V to 1.45V, depending on load, with no AVX offset. Unfortunately, Prime95 small FFTs crashed both threads on our fourth core nearly the instant we started stability validation. The good news for those who don’t mind disabling a core is that the other five cores operated flawlessly.

Our DDR4-3866 also reached DDR4-4000 using XMP timings and 1.35V, though the menu’s DRAM voltage settings are a tad off our measure: We measured 1.351V at the DIMM slots when using the board’s 1.3332V setting, even though the board reported only 1.328V. Let's not be overly critical about this, though, since most competing boards also provide 15 to 20 mV more than the setting indicates.

The plethora of memory-optimization settings includes a full set of primary, secondary, and tertiary timings.

In a phenomenon that overclockers have labeled “Vdroop,” CPU core voltage tends to sag as heavier software loads are applied. The Prime Z370-A includes Asus’ CPU Load-Line Calibration to offset that sag, and its “Level 6” setting allowed our CPU to drop just a smidge, from 1.30V to 1.28V. Most of us would be happy to settle for 4.80GHz on a 4.85GHz-capable CPU, knowing that the tiny drop in frequency came at significantly lower temperatures (around 10° C). The  alternative, “Level 7” Load-Line Calibration, boosted our CPU to around 1.34V under load, which caused thermal throttling.

The Tweaker’s Paradise menu provides advanced controls that can help those with a competitive streak gain those last few additional MHz on a CPU that isn’t so tightly limited by its internal thermal interface.

“DRAM CTL REF Voltage” sounds like a single setting, but opening up that menu reveals a flurry of settings for all eight memory “ranks.” (The interface on each side of a DIMM is called a “rank.”)

Under the Advanced menu, the “Onboard Devices Configuration” submenu gives users the ability to, among other things, reassign the HSIO pathways of two SATA ports to PCIe for the second M.2 slot. When left to defaults, the second M.2 slot operates with only two pathways, and all six SATA ports are operational.

Fan controls for all six onboard headers are available in both PWM and voltage-based modes across four groups, and the board even includes three groups for Asus’ optional fan extension card with the same settings. Options include several programmed profiles, an automatic tuning algorithm, and manual slope configuration.

Other tools include a firmware update mode, storage for up to eight user-defined firmware configurations, ability to export or import firmware settings as a configuration file using a USB flash drive, and a report of the memory’s primary SPD configurations.