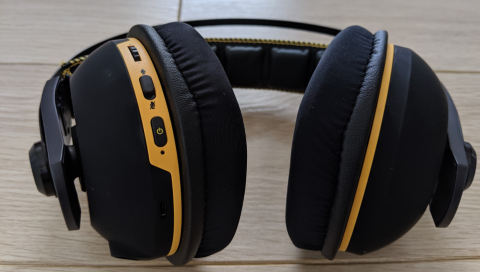 There's plenty to like about the feature-rich Asus TUF Gaming H7 Wireless. But we have reservations about the shape and character of its sound out-of-the-box. A lot can be remedied via software, though.

On paper, the Asus TUF Gaming H7 Wireless has the potential to be Asus' first true standout gaming headset. It's wireless, offers 7.1 virtual surround sound and exudes high-quality construction. It's also a bit of a looker, available in black and yellow (pictured) or a more muted black and grey colorway, so streamers who are all about those aesthetics might well find themselves ogling the H7 Wireless.

At the time of publication, the H7 Wireless (Asus also has lower-priced TUF Gaming H7 Core and TUF Gaming H7 wired headsets) is for sale on Amazon UK in its Gunmetal color scheme only. However, Asus told us today that the headset should arrive in the U.S. on Amazon and Newegg in about 2 weeks.

The wireless cans certainly pack a lot into one headset. Jumping right off the spec sheet are those 53mm drivers, quite a bit larger than those of rival headsets. Asus has a tradition of going big with drivers, including the fun-but-flawed Angry Birds-looking Asus Strix Pro's 60mm drivers. But to my ears, bigger isn't better. And while these feature-rich cans have a lot of potential, you'll need to mess with the software to bring it out.

The H7 Wireless takes the weight off the top of the head using a suspended headband design, where an elasticated and well-padded leatherette contact band sits below a lightweight aluminum headband that forms the skeleton. Along each side of the elasticated band is high-quality stitching (not a single thread was out of place in our review sample) in the accent color, and some "TUF Gaming" branding is imprinted on the top. There's more TUF Gaming branding on each side of the headband's base, which are attached to matte plastic foundations for each earcup and finished with an aluminum bolt bearing the TUF wings’ logo.

The earcups are enormous and finished in rubberized matte plastic that looked great when I first pulled it out of the box but quickly gathered fingerprints and other marks. Another thin band of accent color marks the edge of the cup, and on the rear-left is the volume wheel, mic mute and power button. All the controls, especially the mic mute switch, feel well-made and durable. The volume wheel is stepped, so it's a little trickier to make precise adjustments than with a freewheeling control. But in the heat of the moment you're less likely to accidentally max it out and blow your eardrums.

Moving inwards, the large earpads are agreeably soft, finished in a microfiber cloth with a leatherette inner for, as the theory goes, better sound isolation. There's some degree of lateral and vertical twisting adjustment to the earcups; although, you can't fold them inwards for reducing their profile for travel or storage. The only sound you hear when you put the H7 Wireless on is the elasticated band stretching to fit, which speaks highly of the build quality and materials used throughout. A detachable gooseneck mic slots in via an asymmetrical 3.5mm jack, so it's easy to pop in and out, and there's no undue popping or crackling when you do.

In terms of comfort, the headband design is nicely engineered to provide just the right amount of clamping around your ears. The H7 Wireless won't fly off your head if you sneeze or celebrate a victory with too much exuberance. At the same time, they don't feel like they're digging in around your head, either. We're not sold on that massive earcup design, though. This humble reviewer has a smaller head and larger ears, and that meant my ears ended up pressing against the driver grilles. That obviously gets uncomfortable after a very short time, since the grilles are hard surfaces. The larger circumference has knock-on effects on the sound too, which l'll get to below.

I might as well get right to the punch: the H7 Wireless' overall sound performance out of the box is disappointing.

Out of the box, which has virtual 7.1 surround sound enabled, there's plenty of low-end power available. In certain situations, most notably action-heavy games with lots of explosions, the overall response sounded dramatic. You'd expect that from a headset with "Gaming" in its name, right? A bit of exaggerated low-end is fine for selling the sound and fury of bombastic action titles and multiplayer shooters.

The problem is that any dialogue going on amidst the explosions was lost under all that bass. That was also true when communicating with friends or teammates over Discord. Finding balance was tricky, since turning down the game's volume meant risking missing important sound cues. But in order to clearly hear other voices, that's often what I was inclined to do with the H7 Wireless. Having virtual surround on by default is an unfortunate move, because the feature really exacerbates the muddy bass and imprecise stereo spread.

There's better news, though: you can significantly improve sound with some tweaking in the Asus ROG Armoury II software. Turning it off virtual surround tightened up the sound immediately. This is expected with any headset, but it was especially noticeable here. When it came to gaming, I flat out avoided this feature; the sound-space just doesn't work.

In stereo mode, the bass was still a bit too strong for my ears, but was much more capable of retaining the sparkle from higher up in the EQ and articulating the little details in the mixes of songs I know intimately. Little breaths in vocal performances and fret scrapes as guitarists change chords were audible, albeit not captured as cleanly as I've heard on competitors.

Using Armoury II to adjust the sound (more on that shortly), helped make the H7 Wireless more appropriate for all-around multimedia use, but I'm not sold on the fundamental sound design. Placing a 53mm driver in a chamber as enormous as this seemed to bring more drawbacks than benefits, including noise leak. The contact pads don't sit snugly on the head, so some sound escapes, which affects the resonant frequencies within the earcup. It also means the H7 Wireless don't isolate sound very well, for the wearer or those nearby. It goes both ways.

As for wireless range and stability, I experienced virtually latency-free performance and it stayed within range just about anywhere in my house, across three stories.

Mic performance is also a happier story. Output is thin but clear using default settings. I was able to improve performance and achieve a nice warmth and well-rounded response using the Armoury II software, which I'll get to now.

Storage-greedy peripheral programs are a pet peeve of mine, so Armoury II isn't getting away with taking up 439MB of storage on my PC without me bringing it up. In every other regard though, this program's a lifesaver when using the H7 Wireless. In addition to the virtual surround toggle control, there's a host of sound usage presets here -- 7 in total -- which alter both EQ and reverb settings. You can toggle the reverb on or off independently or cycle between 6 presets and adjust via a wet/dry (wet audio is processed and made with a special audio device, and dry audio is raw and unprocessed) mixer.

Armoury II is as feature-rich as we've ever sampled from a headset companion program, and while I didn't find any practical use for the reverb settings, some music genres sounded bouncier and more enjoyable when using the Music preset. There's also a manual 10-band EQ for audiophiles to play with to their heart's content.

I was equally impressed by the mic software settings. Five adjustable effects, including a compressor, noise gate and de-esser, really do have a profound effect on your mic output. Even when using default settings, the mic produced a much richer, fuller sound than most competitors' mics. It's not quite up there with standalone models, like the Blue Yeti, but you wouldn't expect a ~$100 headset's mic to be. What's startling is that it's even close.

Battery life is a real strength of these cans. Asus pegs it at 15 hours, and that really does hold truth in the field. That's partially due to a very eager auto-shutdown feature that kicks in after 5 minutes without receiving an audio signal, but the rare occasions you might be caught out by this are well and truly offset by such a gargantuan charge time.

The Asus TUF Gaming H7 Wireless has a lot going for it. It's stylish, the headband is cozy, its software and mic impress and its wireless tech never failed me.

But it lacks the fundamentally great sound necessary for an unreserved recommendation. The headset requires too much fiddling to clean up the sound. I'd prefer a better plug-and-play experience. Additionally, the virtual surround sound didn't sound good while gaming, due to overwhelming bass. That's disappointing considering this is a key feature of the headset.

Still, other areas, like the build quality, are on point. If you can find this headset for around $100, it's as rich in features and functionality as you could ever hope to attain from a similarly priced competitor.