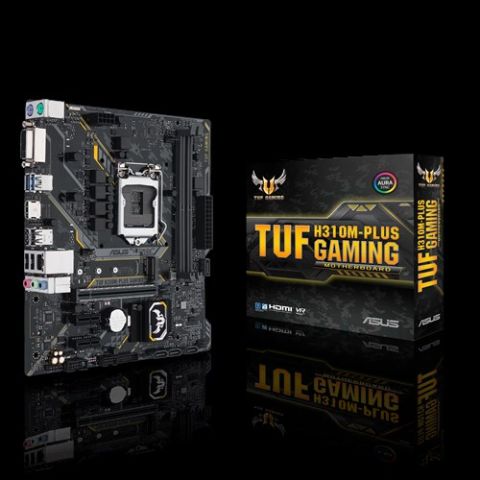 This $79 / £63 Micro-ATX H310 board from Asus gives users loads ESD protection along with a touch of RGB lighting and most of the necessary features for an entry-level gaming-centric build.

The TUF Line today isn’t the same as it was in the past with plastic or metal armor covering anything that wasn’t a slot. However, this board does include features such as increased electrostatic discharge (ESD) protection on the rear panel ports (LAN, keyboard/mouse/VGA/USB) as well as a reinforced PCIe slot, and “military-grade” power components. Asus markets the TUF boards primarily to the entry-level gamer, which fits in well with the H310M Plus’ middling features and modest price.

Along with supporting 8th and 9th generation Intel processors, the Asus TUF H310M-Plus Gaming provides users with the full complement of four SATA ports, a single M.2 slot along with two DRAM slots capable of supporting up to 32GB of DDR4 RAM at the platform’s locked top speed of 2666 Mhz. Also included is an Intel Gigabit wired networking and Realtek ALC887 audio. Below is a complete list of specifications from Asus.

Included accessories are minimal, like the other H310M motherboards we’ve recently reviewed, but Asus covers the basics. Here’s a list of what ships in the box, along with the board.

The TUF H310M Plus Gaming’s overall appearance still fits within the Asus TUF design aesthetic, which tends to use a black PCB and yellow ‘TUF’ highlights in spots around the board. The PCB has a light grey pattern consisting of line segments and triangles around the socket area as well as more on the bottom of the board around the PCIe slots. The chipset heatsink is black with the TUF symbol prominent on top.

The right side of the board uses a rarely seen feature on an inexpensive motherboard: There’s a notch taken out of the right side (where we normally see SATA ports). This is typically used for 90-degree cables/routing but that doesn’t appear to be the reason here since the one SATA port in the area is oriented vertically. Either way, form or function, it's a bit different than the rectangles we are used to.

Of the other two boards we are using to compare this one against, the Asus TUF is the only model that has RGB LEDs. Granted, this is only on the tab located on the right side of the board, but it's better than none or one color and can help the board fit in with a build theme more easily.

Overall, the Asus TUF H310M-Plus Gaming should fit into most build themes especially when using the RGBs to try and coordinate things and is easy on the eyes.

Focusing on the top half of the motherboard, one of the first things we see is a lack of shroud covering the rear IO, which is common among entry-level boards. The TUF H310M-Plus Gaming sports a 5-phase power delivery system which does not use heatsinks. This setup proved to work just fine throughout our testing with the 91W Core i3-8350K used, so it should handle anything you throw at it, as the board is unable to overclock. Power is fed to the VRMs via a single 8-pin EPS connector just above the socket to the left.

The right of the board we can see two grey DRAM slots both without any reinforcement or RGB lighting. To the right of the DRAM slots sits one of four SATA ports. Just above that is the 24-pin ATX 12V connector, and finally we spot “TUF Gaming” letters in the upper right-hand corner. The RGB implementation here is plenty bright without being overwhelming and can help match a build theme while showing off the TUF Gaming branding. If you would like to add more RGB lighting, an additional 4-pin RGB header is located just to the left of the 8-pin EPS.

Last here are the two fan headers. These are located just above the M.2 slot and to the left of the DRAM slots. Both are capable of controlling attached fans through either PWM or DC methods, but there aren’t any other fan headers on the board. I would liked to have seen three headers, as even with smaller form factor builds, there can be more than 2 fans in the chassis.

The bottom portion of the board, from left to right, shows the Realtek ALC887 audio chip and four yellow-and-black Japanese audio caps, along with a yellow audio separation line snaking its way from the bottom of the board up to the rear IO area. 7.1 channel audio can be used, though it’s only through the front panel HD audio. Otherwise, it’s 5.1 through the rear jacks.

Next is the chipset heatsink, which is held on via two pushpins. We like to see these held on by screws like the MSI H310M Gaming Plus we recently looked at, but the pushpins will do, so long as you don’t remove them and then try and reinstall the heatsink.

To the right and below the chipset heatsink live the other three SATA ports. Note that if you install a SATA drive in the board’s M.2 slot, the SATA_2 port will be disabled.

Across the bottom we see a bunch of headers, including the front panel header, USB headers and more. There is nothing special to report here, so here’s a bulleted list of the bottom headers.

The IO on the back panel consists of six total USB ports, all using Type-A connectors. Two of the ports (in blue) support USB 3.1 Gen 1 (5 Gbps) speeds with the other four being USB 2.0 (black). Display outputs are a DVI-D port as well an HDMI port. The audio connectors are a single stack with three 3.5mm analog jacks capable of supporting 5.1 channel surround. Last are two legacy PS/2 two ports for your ancient mouse and keyboard.