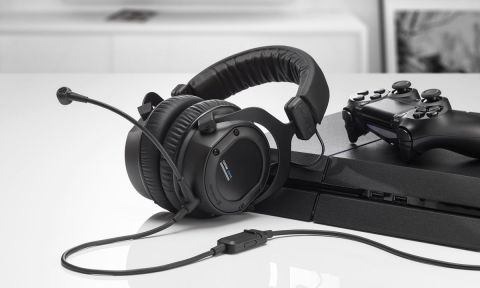 Although pricey, the Beyerdynamic Custom Game is a fantastic choice for anyone looking to immerse themselves in the RPG world.

Beyerdynamic is best known for its studio-quality headphones, but the Custom Game is all about appeasing gamers. It’s an expensive gambit for any player, currently available for $180, but for those who demand gaming headsets with superior sound over everything else -- like luxurious comfort, style, or versatility -- the Custom Game is a great fit.

Having also used the Beyerdynamiic's more expensive gaming model, the MMX 300 ($300 at the time of writing), I can safely say that the Custom Game is a better value for the money. But does it really provide the kind of sounds that gamers demand? Or is it just a case of Beyerdynamic trying, like many before it, trying to enforce music industry norms on the gaming audience? The reality is… it’s a bit of both.

There’s no escaping it: the Custom Game is an ugly, bulky headset. The microphone attaches to the left earcup via a thick 3.5mm cable that comes packaged with the unit, so you can -- in theory -- opt to hook up this headset via a regular cable and wear it without the mic at all. Handy for offline gaming, sure, but unlikely to entice anyone to wear this out in public unless attending an air traffic controllers convention.

It’s angular and bulky, and the earcups are extremely large, enveloping your ears while pulling the adjustable headband tight across your skull. The brutal, industrial design is intended to convey the sense of no-nonsense German craftsmanship, which runs deep through the actual audio tech in this headset.

There are very few frillls here. The earcups are attached to the metal frame via a pincer-like design, making them flexible enough to fit wide heads. The headband has a very firm adjustment so it doesn't slip down and can fit most head sizes. If you want more pizzazz, the headset comes with six earcup covers with different designs; although, if they improve or hurt the overall look is up to opinion.

When I wore it, the faux leather earcups and headband rested nicely on my skull, making it plenty comfy for long gaming sessions. It’s a heavier headset (1.3 pounds), but that only adds to the fit. What’s more, the material stayed cool - -unlike the velour-like fabric on the MMX 300 -- even after several hours of use. That’s good news considering many gaming headsets become tight and uncomfortably warm after about 45 minutes, with exception to more modern premium models with cooling gel in the ear cushions. But the Custom Game stays fresh and snug without any fancy fabric tech. It’s a commendable achievement and a testament to the thoughtful design and use of materials.

Aside from the headset's debatable ugliness, the only other downside to the design is the connection and cable supplied. The fit between the cable and the socket inside the earcup is spongy and feels loose at times, and I really needed to jab the 3.5mm jack into the headset to make it properly connect. I found a similar issue with the MMX 300. It’s not a deal-breaker, but the poor fit of the cable does instill a lack of confidence in a circa $200 headset.

As with all Beyer headsets, the sound quality is where the Custom Game absolutely shines. Regardless of how you look while wearing it, the audio is top-class, matched only by some Sennheiser gaming headsets, top-end SteelSeries cans and perhaps the Creative SXFI Air.

Its frequency response of 5-35,000Hz is slightly beyond the comprehension of human ears, yet adds a certain eccentricity to the end of notes that I just love. When I played Assassin’s Creed Odyssey, it picked up all the background noises superbly, separating them into very distinct sounds. Even in the middle of pitched battles where the headset’s superb bass kicks in, I still got a fantastic amount of clarity across all other ranges, making each encounter feel a little bit more immersive and thrilling. The Custom Game excelled at both the full-bodied orchestral scores in Odyssey and more string-led incidental tunes.

The only place it lacked in RPGs like Odyssey was with dialogue, where I noticed moments of emptiness. However, it was incredibly subtle. For the most part, talking sounded clear and natural, especially when male characters with bassier timbres were chatting. Gaming headsets generally struggle with speech, but the Custom Game -- despite not being perfect -- is among the best in this regard that I've used.

Next up, a test with the recent Resident Evil 2 remake to see how it handles ambient noise and horror scares. Again, the Custom Game performed admirably, picking up small sounds designed to frighten players without making them feel artificial or out of place. Speech actually sounded a little more natural in Resident Evil 2 than it did in Odyssey. The headset presented quieter and more softly spoken scenes extremely well. Overall, this is a headset we’d thoroughly recommend for single-player games.

Sadly, the main drawback here is that it lacks 7.1 surround sound, making it less well-tuned for online shooters like, Battlefield V or Apex Legends. That’s a problem if you’re looking to play competitively, because the imaging just can’t match top-end headsets from traditional gaming manufacturers. While something like the Turtle Beach Elite Pro 2 makes you feel like you have superhuman hearing, allowing you to pinpoint footfall and gunfire, the Custom Game only offers a bass-lite mode that emphasizes treble and help you pick up ambient detail noises.

No, the Custom Game isn't a slouch when it comes to picking up sounds online, but only because it has excellent frequency response and low distortion bringing richness to the audio -- not because it provides a competitive edge by emphasizing enemy movement. This seems at odds with the fact the Custom Game is marketed towards competitive play and has modes for blocking out external noise in busy environments, like eSports contests, adding up to a somewhat confused audio proposition.

Outside of gaming, the headset performs extremely well. Because of the excellent bass, it’s perfect for action movies and excelled when I watched John Wick 2 and Thor: Ragnarok. Thanks to the headset's rich sound, it’s great for movies and TV, where it doesn’t need to rely on precise 7.1 audio and can, instead, fake the effect with much more efficiency. It's also a good option for listening to music, which I discovered while listening to Hotline Miami's thunderous nu-’80s soundtrack. The bass again was a huge asset, but it also handled less bass-heavy tracks well, especially after I adjusted the sound profile.

The Custom Game isn’t packed with features, but it does have an audio profile slider that gives you four different outputs. These range from, crudely, ‘very bassy’ to ‘not hugely bassy.’

The ‘closed’ setting is designed to block out noise in a busy environment, which it does adequately, considering there’s no dedicated noise-cancelling here. The ‘open’ setting allows you to ramp up the bass, which is ideal for big, dumb shooters like Doom or action movies. There’s even a mode that emphasizes speech and mid-range noises, ideal for online shooters. A fourth mode offers a more balanced ‘best of everything’ setting. The differences between most of these is subtle but noticeably adjusted the audio as I adjusted the slider.  It's not a killer feature, but it's handy to have and something that you don't get on other Beyerdynamic gaming headsets.

A volume control slider sits on the detachable cable, offering muting and volume adjustment options. It's sturdy, easy to access and simple enough to use without looking.

The mic sitting at the top of the cable next to the earcup is a very fine piece of hardware. While the headset isn’t tuned to competitive shooters, the mic is perfect for communication, offering a high-quality cardioid mic surrounded by a foam pop shield for fighting popping noises when speaking. The audio picked up by the mic was crystal clear regardless of how close it was to my mouth, and my teammates confirmed that there was almost no background noise. That makes the Custom Game perfect for streamers, or players looking chat during slower types of online games where hearing enemies with perfect clarity isn’t quite as vital to success, like MMOs, RPGs and strategy titles.

Ugly? Yes. A little confused about what it wants to be? Sure. Expensive? Absolutely. Despite these flaws, though, the Custom Game is a wonderful headset that genuinely brings studio-quality audio into the gaming space. It’s comfy enough for long gaming sessions and seems sturdy enough to survive being pulled on and off your head many times (once that cable is jabbed in tightly). It adjusts well when used across different kinds of media and offers a passable enough imitation of surround sound to suit most online gamers.

However, I absolutely wouldn’t recommend this headset for shooters and instead suggest you stick to headsets like the SteelSeries Arctis range or HyperX Cloud Alpha.

But if you’re looking for something to pick out the very best sounds in long, rich single-player experiences or more composed online experiences like MMOs, this headset is tough to beat.