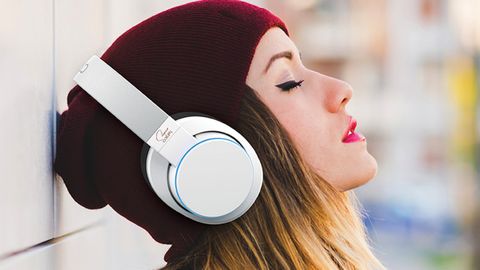 A versatile and accomplished headset, the SXFI Air is a great buy for anyone looking to play games, watch movies, and binge TV with great, affordable, but not-quite-top-end audio.

Update: Unfortunately right now, Creative still isn't selling these anywhere outside of its own store, either in the US or the UK. You can pick them up here for about $160 or for £120 in the UK (although this is the C model).

Creative has been a player in the PC audio space for decades, and was responsible for the sound cards of many a beige tower back in the ‘90s. Its audio smarts continue here, with the SXFI Air, a mid-range wireless headset aimed squarely at gamers who want to make use of their headphones for Game of Thrones and Gaslight Anthem as much as God of War.

The main sell here (or gimmick, depending on your perspective) is the inclusion of Super X-Fi technology, which maps the shape of your head and ears to deliver personalized, "holographic audio," intended to optimize the experience for each individual user. Those are big ambitions, then, for a headset currently retailing around the $160 / £150 mark. But the company largely succeeds at almost all its aims.

The first thing you notice when you slip the headphones onto your ears is that this unit is large. The adjustable headband, which suits listeners with larger head-sizes, is well padded and attaches snugly to the oval ear cushions at the side. While these ear pieces are matte plastic and rather chunky, they’re well made and can withstand a reasonable amount of pulling and bumping, as occurs with everyday use. But the price you pay for this kind of build quality here, is size. The cans poke out further than most gaming headsets and rival headphones, like the Sennheiser Momentums and Bose QuietComforts.

When you slip the SXFI Air on it really is snug and comfy. The breathable fabric ear cushions are large enough to encompass all ear sizes and shapes, and they’ve got memory foam cores, so they squish nicely against your head. There’s enough give in the headband to avoid pinching your head during prolonged sessions of use, and a small amount of vertical movement in the ear cups to allow a little adjustment. If you want, you can swap out the ear cushions for fresh pairs, or you can even upgrade to leatherette cups, although we didn’t have the opportunity to test these.

Overall, the headset is delightfully comfortable, even after several hours of continual use. They were snug on my head during testing, but not too tight, and the only discomfort came from a slight pressure on the top of my head from the headband which, while padded, isn’t as generously cushioned as the ear pieces. And while not heavy (weighing in at 11.9oz / 338g), the Creative SXFI Air are a large device, so doesn’t offer as stylish a solution as many traditional headphones. As gaming headsets go, though, they're reasonably handsome.

Where audio performance is concerned, the Creative SXFI Air does a great job in almost all use cases. We tested it primarily for gaming in this instance, but also thoroughly examined its potential for movies, TV, music, and voice chat or phone calls. Hooked up to the back of a motherboard with both the 3.5mm or USB cables, the Air delivers fantastically consistent audio across most ranges. During a lengthy session of Assassin’s Creed Odyssey, this headset was noticeably excellent at maintaining a full, rich sound through dialogue exchanges and incidental spoken audio.

One drawback of traditional gaming headsets, which tend to focus on bass for explosions, and surround sound for online play, is that they produce echo during dialogue and empty sounding speech, like you’re talking to other characters inside a cargo container. The SXFI Air, however, manages the range of voices admirably, while still delivering satisfying bass during combat and competent surround sound during open-world exploration. It manages the mix of action sounds with the game’s swelling score too, with neither losing any distinction or potency even during busy fight scenes. For single-player adventures, it’s highly recommended.

One area where this headset lags a little behind its top-end gaming gaming competitors, like the Sennheiser GSP series and the Turtle Beach Elite Pro 2, is in the way it delivers surround and imaging. It isn’t as fine-tuned and specialized here, so when tested with Fortnite and Apex Legends, it was slightly harder to place enemies within the world, or to hear the approach of footsteps among the pings and blasts of combat. The SXFI is by no means poor here, but lacks the kind of tuning that gives you a true edge online.

The headset works perfectly with VR too, adjusting well to movement of the head, always passing the audio around as you look at different objects within the world. We tested with Rez Infinite and PlayStation Worlds, and the Creative kept good pace with even quicker games like London Heist as well.

Moving on to movies and TV, again, the SXFI Air delivered clear and rich audio for more dialogue-heavy pieces. We tested with several Netflix shows, like Money Heist and The Punisher Season 2, and there was no need to adjust settings to get a great experience during louder fight scenes or quieter talking moments. Again, the surround sound delivered is clear and distinct, although busier action moments involving shoot-outs didn’t quite perform as well as more specialist, higher-end headsets. Considering this is a mid-priced unit, however, the SXFI punches well above its weight for gaming, TV, and movies.

For many, this headset will be used for music too. We’ll discuss the efficiency of the touted ‘holography’ features in the next section, which impacts most clearly on the headset’s presentation of music. Here, we'll say that even if you’re ignoring all the Super X-Fi tech, you still get a decent experience with music. The Air is most comfortable in the mid-range, and singer songwriter tracks by the likes of Ed Sheeran and Chris Cornell benefit the most. The headset’s 50mm drivers are more than capable of delivering above-average sound for rock and metal, while more bass-heavy types are well served, but will sound clearer and richer via more specialist audio cans. The SXFI Air is very much an all-rounder, so any music that demands more extremes of frequency tends to be less accomplished here.

Finally, for calls and spoken word, the SXFI Air performs just fine. You lose a little of the richness of a good narrator during audio-books, but there’s none of the emptiness that plagues cheaper headphones. Speaking via video conferences and on the phone, we found the audio clear as long as the stream or connection itself held up, so there are no problems on the headset side.

So, let’s extend our discussion of music and call audio by discussing the headset’s most famous feature -- it’s Super X-Fi tech, which uses what the company calls headphone holography to simulate both a full soundstage and realistic multi-audio voice chat. At least, that’s what Creative claims. Setting it up via the mobile phone app (simply called SXFI App - on Android and iPhone) is quite fiddly in terms of process, even though there are plenty of ease-of-use features like cabled connection and Bluetooth transfer between phone and headset.

The theory here is that the SXFI tech will adjust audio according to the shape of your head, so the set-up requires you (or a friend) to physically take pictures of your head via a phone camera and for the app to build you a personalized experience based on this. It’s by no means a flawless system, but does a good job of substituting for a multi-thousand-dollar studio set-up.

We tested the system with several users, creating multiple profiles and swapping between them to create a sort of "Pepsi challenge" of "which one sounds best?: While they were rather similar, and it was often harder to tell which profile was your own, the profiles did adjust the audio slightly. What’s more, having the Super X-Fi enabled via the headset did have a significant impact on how things sounded. As boasted by the manufacturer, the effect was moving the sound from the center of your head, to placing it at the front, like a soundstage. At first, we worried that it lost the fullness provided by the bass, but after a few hours of further listening, it made sense as the SXFI tech picks up far more of the subtleties of music by letting all the frequencies breathe. It's not quite studio-level audio, no, but significantly improved on other mid-range headphones.

The impact of Super X-Fi was less apparent during movies, TV, and gaming, but it did improve things a little. When tested with several MCU movies like Black Panther and Avengers Infinity War (on Blu-ray), the tech added a little more depth to the surround sound noises, and incidental sounds. So, sure, it’s a bit of a gimmick, but the SXFI tech does enhance the capabilities of the headset, even if the holography element isn’t quite as revolutionary as it might claim to be.

In terms of other features, there are plenty here. There’s a micro SD card slot on the headset itself, so you can listen to music without an input device at all, and you can toggle the SXFI on or off via a button on the headset. That button is given too much prominence on the earcup itself, however, as it’s easy to press while you’re attempting to find some of the other controls. The Air comes with touch control on the left earcup, which works more often than not via a simple swipe of the finger, allowing you to skip tracks and pause music, etc.

Having the NanoBoom mic as a detachable feature is a neat touch, as this allows you to substitute for a 3.5mm gaming mic if you so desire. The supplied mic is subtle enough for everyday wear, and picks up voice audio well. It excludes most background noises admirably, although is sensitive enough to pick up other voices in a busy office environment.

One issue we did experience was stuttering and artifacting when using Bluetooth, while connected to both mobile phones and tablets, especially in crowded places like train stations. If the SXFI has one tech weakness, it’s the quality of the Bluetooth, although it performs flawlessly outside of busier arenas. Battery life is great too. While the manufacturer claims ten hours per charge, we found it closer to eight while using Super X-Fi. Not stellar, but the headset charges quickly thanks to the USB-C connection, and it lasts longer than most traditional gaming headsets.

In the world of gaming headsets, $160 / £150 is a fair chunk to pay, placing the Creative SXFI Air at (or at least near) the top of the scale. In terms of everyday headphones though, it’s mid-range. However, because it straddles both worlds so admirably, it justifies that price well, so you’re getting a decent amount of headphone tech and quality for your money.

The Air stacks up well against similarly priced rivals in both traditional and gaming markets, although we’d probably recommend it highest for anyone looking for a gaming headset that also handles other media well, rather than the more casual PC or PS4 player. Overall, it’s an impressive piece of kit that delivers better, more versatile audio than the pricetag suggests. No, it won’t win any design awards, and the troubled Bluetooth is perhaps its Achilles heal, but if you’re looking for a pair of cans that wears well and adapts to the diverse demands of modern life, this is a great option.