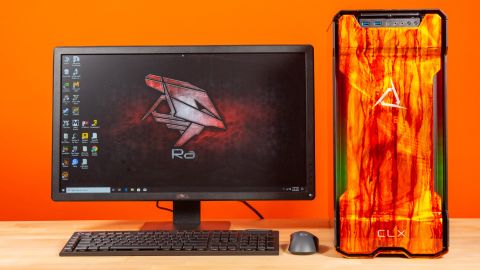 CLX’s Ryzen-powered Ra desktop is expertly assembled and powerful enough for 4K gaming and high-end content creation . And the company isn’t charging a huge premium over what you’d pay to buy and put together these parts yourself.

Anyone with a reasonable amount of PC component knowledge can throw together a collection of compatible parts and build their own gaming rig. If you know what you’re after and have the time, that’s almost always the cheapest option, and the best way to get exactly what you want. But if you don’t want to put in the research and time to build your own rig, going the boutique PC route can give you a similar amount of component granularity, along with (if you’re willing to pay for it) a level of custom aesthetics and polish that’s tough to accomplish on your own--especially if you don’t have a large work space, loads of time, and a reasonable amount of experience with power tools.

That’s what CLX (the high-end sub-brand of Cybertron PC) delivers with its sun god-themed “Ra” full-tower gaming rig. Our $3,842 review configuration came equipped with powerful components like an AMD Ryzen 9 3900X CPU, Nvidia RTX 2080 Ti graphics, and even a crazy fast Gigabyte Aorus PCIe 4 SSD. Those are all off-the-shelf parts that you could put together yourself. But CLX goes the extra mile with custom-braided cables with copper accents that match the SSD heatsink and a custom paint job on the Phanteks Enthoo Evolv X case that, while it might not appeal to everyone, certainly stands out.

The Ra is CLX’s full-tower system, rather than the smaller mid-tower Horus or the SFF Scarab. There are a few cases you can choose from in the Ra configurator, but the Phanteks Enthoo Evolv X is the default, and in a lot of ways, it’s a nice chassis. You get swing-out tempered-glass panels on each side and a flip-down panel in the top front that houses USB-C, two USB 3.0 type A ports, audio jacks, and buttons to control the RGB case lighting.

Speaking of the lighting, there are two strips behind the removable front panel that create an attractive reflective glow along each side of the front of the case and a thin strip that runs along the length of the power supply shroud inside the case. Our review configuration also included 120mm Thermaltake RGB fans in the front, top, and rear (seven in total), but those are controlled via software rather than the buttons on the front of the case.

Other aesthetic niceties include the orange/red “hematite” paint job, which combines an orange base coat with what looks like drips or splashes of darker colors running down the top and front of the case, covered with a glossy “diamond” finish. In total, the paint job adds $300 to the cost, and the look was polarizing in our office (some liked it, some hated it). But at least CLX went the extra mile in matching the copper-like exterior with matching accented  sleeved power supply cables inside, as well as the copper heatsink on the Gigabyte PCIe 4.0 boot SSD.

Speaking of the interior, CLX has done an excellent job of keeping things tidy and attractive, hiding most of the cables, save for the sleeved ones plugged into the motherboard and the graphics card (an Nvidia RTX 2080 Ti Founders Edition in our review configuration). This is the kind of polish I’d expect on a system priced at over $3,000. But CLX has done an excellent job of presentation here. Not everyone is going to like the orange paint job, but there are several other colors and styles to chose from, which we’ll address later.

The Ra is the first desktop we’ve tested both with a Ryzen 3000 CPU as well as a PCIe 4.0 SSD, It’s topped off with 16GB of G.Skill memory clocked at 3200MHz. While the Ra’s performance is impressive overall, we’ll see later in testing that the CPU doesn’t always outpace Intel’s Core i9-9900K, particularly in gaming. And the SSD, while fast, didn’t beat systems with two PCIe 3.0 SSDs running in RAID.

Here’s the full list of specs for our review configuration:

Aside from the front ports mentioned earlier (two USB A, one USB-C, and audio jacks), the ports on the rear of the Gigabyte X570 Aorus Master motherboard don’t disappoint. From top to bottom, you get Clear CMOS and Q-Flash Plus buttons (the latter for updating the BIOS via one of the USB ports, and antenna mounts for the integrated Intel Wi-Fi 6/Bluetooth 5.0 module.

To the right of the four Gen 2 ports sit a Realtek 2.5GbE port (in red) and a slower Intel Gigabit Ethernet port (black). With Wi-Fi 6, 2.5Gb Ethernet and a 1Gb Ethernet port, this system is well equipped both for now and for wired and wireless hardware of the near future. Audio is handled via SPDIF or five gold-plated 3.5mm audio jacks, powered by a high-end ALC1220 codec.

As for upgradability, there are plenty of options here. You could install two more RAM sticks (or swap out the existing sticks for a maximum of 128GB), add two more M.2 SSDs under the pre-installed heatsinks (all three slots support PCIe 4.0), and there are five empty SATA ports (the sixth is occupied by a 3TB 3.5-inch hard drive hidden below the power supply shroud.

With an RTX 2080 Ti and AMD’s 12-core Ryzen 9 3900X, our review configuration of the Ra can play just about any game at its highest settings. I played Borderlands 3 (admittedly not the most taxing of titles) on ultra settings at 4K resolution and the game ran between 52 and 64 frames per second.

On the Shadow of the Tomb Raider benchmark (highest settings), the Ra ran the game at 98 fps in 1080p, landing just one frame behind the 99 fps category average. HP’s Omen Obelisk pulled an even 100 fps, but the compact Corsair One i160 that easily led here, delivering 123 fps. In 4K, the Ra’s score of 46 fps was enough to beat the category average (38 fps) as well as the Obelisk (37 fps). But once again the Corsair One led the pack, albeit just barely, at 47 fps.

On Hitman, the Ra lagged the pack a bit on highest settings and 1080p, running at 129 fps, below the 132 category average, as well all other competing systems in our chart. But at 4K, the CLX system came roaring back, with a score of 103 fps that’s well better than the 85 fps average, as well as 9 fps ahead of its closest competitor -- in this case the Corsair One i160, at 94 fps.

The CLX Ra breezed through our stress test, in which we ran the Metro Exodus benchmark 15 times on RTX settings to simulate roughly half an hour of gameplay. The Ra ran the game at an average framerate of 77.8 frames per second. On the first run, it ran just above 78 fps, but quickly dipped to 77, where it stayed for the rest of the runs.

It took the Ra five seconds to transfer 4.97GB of files, a rate of 1017.9 MBps. That’s well above 614 MBps category average. But the Ra’s PCIe 4 SSD couldn’t compete with the HP’s dual NVMe SSDs, running in RAID, that propelled the Omen Obelisk to an impressive 1696.4 MBps.

On our Handbrake video editing test, we had the Ra transcode a 4K video to 1080p. It took CLX’s desktop 5 minutes and 36 seconds, nearly a minute faster than the 6:30 average. But once again, the HP Omen and its Intel Core i9 did slightly better, taking 5 minutes and 31 seconds.

As is usually the case with boutique PC systems, the CLX Ra is bereft of third-party software -- or nearly so. The system comes with Thermaltake’s TT RGB Plus software, for controlling the lighting of the interior fans. The software works and is fairly intuitive, but it would be generous to say it isn’t pretty.

CLX sells the Ra with a lifetime labor warranty and a one-year warranty on the components.

As a fully customizable PC, the CLX Ra has nearly limitless configuration options. There are three full-tower cases to choose from on Ra’s configurator page and Intel or AMD CPU and motherboard options (I counted 21 CPUs on offer in total). Once you’re past that, there are five liquid cooling options, 16 graphics cards, nine memory options, 26 SSDs to choose from and nearly as many power supplies.

So you can customize your part choices in granular detail. But honestly, the Ryzen 9 3900X, RTX 2080 Ti and Gigabyte PCIe 4 SSD in our $3849 review configuration are a solid collection of parts for a high-end gaming and productivity machine.

As is often the case with custom PCs, custom paint jobs are pricey here. The textured orange of our review configuration is comprised of three parts: color (over the standard basic black) adds $200-$250 depending on the shade. The glossy “Diamond” finish adds $50 more, and the “Hematite” technique, which adds the dripping, layered look, adds $50 on top of that. There’s also an option for  a matte finish rather than diamond, and three other exterior finish options if you don’t like the dripping design of our review unit.

In short, if you’re not OK with the matte black exterior of the stock Phanteks case, you’ll be spending between $200 to $300 on the paint job. That’s no small outlay, but if you’re spending thousands on high-end hardware that you’ll probably be using for several years and will take up a decent chunk of your living space, adding a splash of color is at least worth considering.

In terms of value and how much you’d pay for the parts, CLX isn’t charging a huge premium here. After a quick-and-dirty perusal of Newegg, even if you could find a Ryzen 9 3900X at its $499 MSRP (which you generally can’t), a similar collection of parts rang up at about $3,200. Removing the $300 addition for the paint job (which you obviously aren’t getting with an off-the-shelf Phanteks case) on our $3842 review configuration, and CLX is charging roughly $342 to build the Ra for you. That said, given that the lowest actual price I could find for an in-stock Ryzen 9 3900X CPU when I wrote this was $799, the actual real-world difference between buying these parts on the day I wrote this and having CLX build a very similar system (sans paint job) is less than $50.

If you don’t enjoy the experience of assembling a PC yourself, getting a fully assembled system so you can jump right into gaming or media creation, rather than dealing with a big pile of parts and boxes is clearly worth $50. There have been times after a build that stretches late into the night where I’d almost be willing to pay that much just to have someone clean up the mess for me.

At $3,842 in our review configuration, with a flame-like paint job and top-end mainstream components, the CLX Ra desktop clearly isn’t for everyone. But starting at $1,499 with a Ryzen 7 3700X and a GTX 1660, the base configuration (with the same premium Phanteks chassis in basic black) is a better fit for gamers without godlike budgets (or 4K / high-refresh displays).

And despite the high price of our review unit, you won’t actually save a massive amount by buying and assembling similar parts yourself -- especially if you can’t find a Ryzen 9 CPU at or near its MSRP. CLX also did an excellent job of assembling a clean, reasonably quiet high-end system with our review unit. If you’d rather get to gaming than spend hours putting parts together and routing cables, the Ra is well worth considering.

Just know that, if you aren’t married to the Phanteks case and impeccable build that CLX delivers, and you’re OK with opting for an Intel platform rather than Ryzen, you can get similar gaming performance for a few hundred dollars less by opting for HP’s 2019 Omen Obelisk.