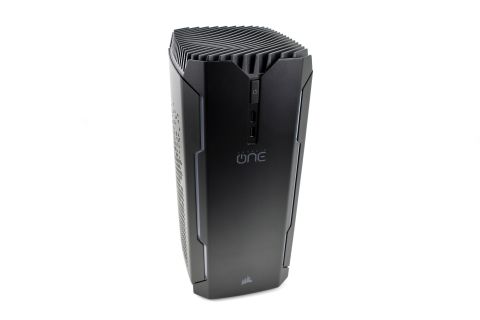 The Corsair One is one of the first Core i7-8700K-equipped PCs we’ve tested, so our comparison factors are limited to our previous-generation Z270 test rig, which sports an air-cooled Intel Core i7-7700K and an EVGA GeForce GTX 1080 Ti Black Edition graphics cards, both clocked at their default (reference) settings. We also loaded a 32GB (4 x 8GB) kit of Kingston HyperX Fury DDR4 2133 and set it to standard CAS timings of 15-15-15-35, and HyperX also provided the storage in the form of a 480GB Savage 2.5” SATA 6GB/s SSD, and the rig is powered by a 1000W EVGA Supernova G3 PSU. The full specifications of our test rig can be seen below.

The Corsair One’s Core i7-8700K is also set to the default clock rates, with a base frequency of 3.7GHz, and a boost speed of 4.7GHz is lightly threaded applications. This should easily outperform our last-gen Core i7-7700K in lightly threaded workloads and even those that favor pure core count, but the lower base frequency could hold it back in some applications. The liquid-cooled GTX 1080 Ti graphics card is also set to reference Nvidia clock rates, so it should perform on par with our stock-clocked GPU. Although the CPU and GPU can be overclocked (via BIOS and software, respectively), we decided to test the Corsair One Elite as it was shipped, without any clock rate tinkering.

The One’s storage outclasses that of our test rig’s, with a 512GB Samsung PM961 M.2 PCIe NVMe SSD residing under the motherboard. It will assuredly put up significantly higher numbers in sequential read and write tests, with the potential to improve performance in productivity applications that rely on storage speeds. The One’s 32GB (2 x 16GB) kit of DDR4-2666 also has the edge on our test rig in speed and capacity, but higher CAS timings (16-18-18-35) could put it closer to our 4-DIMM setup in some memory bandwidth-intensive applications.

The synthetic workloads of Futuremark’s 3DMark Fire Strike and Time Spy tests easily place the Corsair One ahead of our previous-gen platform, accented by higher CPU and Graphics scores across the board thanks to its liquid-cooled Core i7-8700K and GeForce GTX 1080 Ti. We observed sinisterly low CPU and GPU temperatures, with neither component breaching past a cool 57C at full load.

With the CPU under the microscope, the Corsair One Elite sees gains against our previous-gen platform in the synthetic rendering workloads of Cinebench R15. Although the Single CPU and OpenGL Shading tests only show an incremental increase in performance over our test rig, the multi-threaded workloads put a spotlight on the One and its 6-core processor.

The Corsair One Elite is handed its first loss in the CompuBench benchmarks, falling behind our Z270 test rig by a small margin in both the Video Processing and Bitcoin Mining portion of the test. This could be the result of slightly higher memory CAS timings holding back the platform-bound workloads, but the difference in performance (at least, from the GPU) in the Bitcoin test is within variance for stock-clocked GeForce GTX 1080 Ti graphics.

The 512GB Samsung PM961 M.2 NVMe SSD inside the Corsair One Elite outclasses our test rig’s SATA 6 GB/s drive, highlighted by speedier 4K random read and write, and substantially higher 128K sequential read and write performance. The high capacity is adequate to store several of your favorite games, and the secondary 2TB HDD will fit even larger libraries.

Corsair’s 32GB (2 x 16GB) kit of Vengeance LPX DDR4-2666 doesn’t have the tightest CAS timings, and the higher-frequency RAM performs closer to our test rig’s kit of DDR4-2133 with lower latency in bandwidth-intensive workloads in single-threaded workloads. However, multithreaded bandwidth tests give the One a substantially higher lead over our reference system.

The Corsair One Elite takes a backseat to our test rig once again in the PCMark 8 application tests, with slightly lower scores (around 200 points, give or take) in both the Microsoft Office and Adobe Creative benchmarks. This could be the same platform hiccup we saw in the synthetic CompuBench and single-threaded memory bandwidth tests, which seems to be affecting certain types of productivity workloads that rely on the memory subsystem (such as Office and Adobe applications).

The PCMark 10 Extended synthetic benchmark gives us similar results, with the Corsair One Elite attaining a better overall score thanks to its higher performance in the Essentials, Digital Content Creation, and Gaming portions of the test. However, the Productivity segment of the benchmark gives us similar results as some of the other workloads we’ve tested thus far – the One falls slightly behind our last-gen Z270 reference machine by a small margin, and single-threaded memory bandwidth could play a significant role in that.

Switching back to a gaming workload, the One easily outpaces our previous-generation Z270 system in the VRMark benchmark. The lead shrinks to less than 1FPS when the details are turned up in the Blue Room test, but the liquid-cooled CPU and GPU inside the One appear to have a slight edge in VR applications and games.