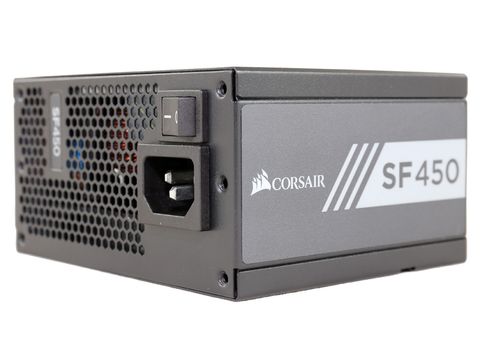 Using results from the previous page, we plotted a chart showing the efficiency of Corsair's SF450 at low loads, and loads from 10 to 110 percent of the PSU's maximum-rated capacity.

The SF450 is highly efficient under light and normal loads. Only the Cooler Master V450S manages to beat it. That unit is semi-modular though, and it's a lot larger than the SF450. The comparison isn't quite fair.

In the following tests, we measure the efficiency of Corsair's SF450 at loads significantly lower than 10 percent of the device's maximum capacity (the lowest load the 80 PLUS standard measures). The loads we dialed were 20, 40, 60 and 80W. This is important for representing when a PC is idle, with power-saving features turned on.

Under light loads, efficiency is very high. The PSU even operates passively in the first two tests, generating zero noise. During the next tests, the fan noise is inaudible at 19.9 dB(A).

The 5VSB rail is highly efficient. Only FSP's HGX450 registers higher efficiency on this rail. Then again, that's an ATX PSU, not an SFX one.

The first chart below illustrates the cooling fan's speed in RPM, and the delta between input and output temperature. The results were obtained at 36 °C (96.8 °F) to 45 °C (113 °F) ambient temperature.

The next chart shows the cooling fan's speed (again, in RPM) and output noise. We measured acoustics from one meter away inside of a small, custom-made anechoic chamber with internals completely covered in sound-proofing material (be quiet! Noise Absorber kit). Background noise inside the chamber was below 18 dB(A) during testing, and the results were obtained with the PSU operating at 36 °C (96.8 °F) to 45 °C (113 °F) ambient temperature.

The following graph illustrates the fan's output noise over the PSU's entire operating range. The same conditions of the above graph apply to our measurements, though the ambient temperature ranged between at 28 °C (82.4 °F) to 30 °C (86 °F).

Under normal operating conditions the SF450 is a very quiet PSU. That's amazing given its ultra-compact dimensions that lead to a densely-populated PCB with restricted airflow between components. Apparently, high efficiency, minimal thermal output and a semi-passive mode combine to deliver near-silence, especially in ambient environments under 30 °C.

Prev Page Load Regulation, Hold-Up Time And Inrush Current Next Page Cross-Load Tests And Infrared Images
33 Comments Comment from the forums
Be In the Know