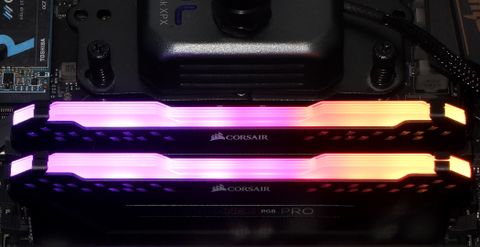 Corsair’s Vengeance RGB Pro 2x 32GB DDR4-3200 comes at a low-enough price to make it worth considering against its better-specified rival. Budget and personal preference will probably dictate your decision.

Corsair’s 2019 launch of 2x32GB kits at DDR4-3000 left us a little confused concerning its target market, as our experience with older platforms had shown that DDR4-2933 had broader compatibility, while newer platforms such as AMD’s Ryzen 3000 series were being touted with a DDR4-3200 baseline. We expected that newer platforms were the target, since older ones would at least need a firmware update to support the new capacity, if one was even available. Given the nature of that oddity, it didn’t take Corsair long to supplement its 2x 32GB list with a Vengeance LPX DDR4-3200 kit. Today we get to test its RGB sibling, Corsair’s 64GB 3200 Vengeance RGB Pro. When we wrote this, it was selling on Newegg for $330.

The first thing you might notice about Corsair’s kit (part number CMW64GX4M2E3200C16) is that it uses inexpensive stamped-aluminum heat spreaders. That’s a great visual for something people who aren’t so keen on RGB would want to see: Vengeance RGB Pro costs only $10 more than the similarly-clad non-RGB Vengeance LPX. With the same timings on both the Vengeance RGB Pro and Vengeance LPS, buyers can simply decide whether the RGB feature is worth $10 to them.

Sixteen Micron D9XPF ICs (eight per side) at a capacity of 16Gb (2GB) each are found under those stamped heat spreaders. Now labeled with dual Spectek/Micron branding, there appears to be a discrepancy between the speed bin of the IC and the highest non-XMP value of each module’s SPD. Specifically, our copy of Micron’s numbering system shows that these should be DDR4-2666 CAS 18 (straight timings), whereas both our motherboard and CPU-Z detect these as DDR4-2133 CAS 15 when XMP is disabled.  Meanwhile, since XMP is an overclocking technology, assuring stability at DDR4-3200 CAS 16 requires the board to increase DIMM voltage from DDR4’s 1.20V baseline to 1.35V.

While the lack of any DDR4-2666 values will come as a disappointment to anyone with an H-series or B-series chipset who buys this kit by mistake (Intel won’t let those board set more than DDR4-2666), we can’t think of many other modern consumer chipsets that would have a problem configuring the kit’s DDR4-3200 XMP value --that is if the motherboard itself supports XMP.

Corsair offers iCue RGB control software for its RGB memory, which can be programmed to a variety of patterns that can also be controlled in both cycle speed and direction. Users can also select fixed color patterns, though the one we show in the second image wasn’t useful due to color bleeding/blending at the plastic light diffuser. Those who don’t like the software or would prefer to sync the lighting to their motherboard will find that it’s also supported by the RGB utilities of major motherboard brands.

We were surprised to see that this Vengeance RGB Pro DDR4-3200 kit had less overclocking capability than our previously reviewed Vengeance LPX DDR4-3000 samples, but a look at the timings we used and the timings at which these kits are rated could be useful. Increasing tRCD and tRP to 22 cycles got us to DDR4-3600.

Though the Vengeance RGB Pro required more tRCD and tRP to reach DDR4-3600, it did so at lower tCAS than the earlier Vengeance LPX. As these timings are generally listed in order of significance, our performance tests may still show Vengeance RGB Pro to be the better option for overclockers.

Latency has a secondary impact on Sandra Memory Bandwidth, so we’re not surprised to see G.Skill’s lower-latency, pricier kit take the lead at all settings here. The Vengeance RGB Pro sits in the middle for both price and performance in this metric.

The Vengeance RGB Pro DDR4-3200 beats its non-RGB DDR4-3000 sibling in games, but only when using XMP values. As most users don’t custom tune their modules, that’s probably good enough.

We find it a little easier to experience the performance difference in this timed test, where the Vengeance RGB DDR4-3200 finishes its tasks ahead of Vengance LPX DDR4-3000 at all settings. Yes, the higher-priced TridentZ Neo is still faster.

During our tests, the non-RGB Vengeance LPX DDR4-3000 was cheap enough to lead the value race, while the Vengeance RGB Pro DDR4-3200 took second place. But for builders who won’t accept anything less than DDR4-3200, the choice becomes a little more obvious.

Having said that, you could still save money by getting the Vengeance LPX DDR4-3200. We didn’t review it, but it has the same timings as the RGB Pro version and should thus provide the same performance, for $10 less.

The next step up in performance comes with an even higher price, and even more pronounced RGB LED effect, from G.Skill. Whether the performance difference is worth that extra money is a matter for you to decide, based on what you do regularly with your system and how those tasks are affected by increased memory speeds.