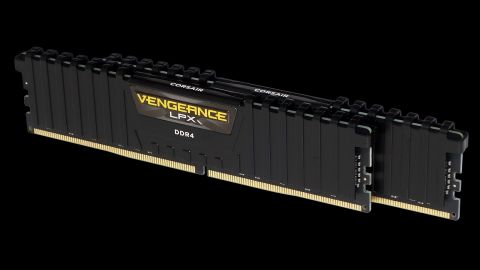 It won't win any accolades for speed or latency, but buyers who need 64GB in a dual-stick configuration who can’t wait for anything faster to show up will find Corsair’s Vengeance LPX an adequate -- and available -- option.

The long-awaited launch of 32GB-per-module consumer memory is finally here, thanks to Corsair and Micron. Samsung first presented the idea back in May of 2018, but that rare memory was only for notebooks. Samsung followed up a few months later with desktop DIMMs, but all we saw of it was an endlessly out-of-stock listing at a reseller. Enthusiasts grew so weary of the endless wait that Asus decided to fill the gap with quad-rank DIMMs, but extremely limited compatibility meant that Zadak’s double-capacity DIMMs were produced in such low numbers that we never saw them on the US market, and even G.Skill neglected to sample us with its follow-on parts. Samsung finally let a few of its modules leak out when it was ready to announce EOL (end of life) production status for the 16Gb ICs that started this discussion, and it wasn’t until Micron created a suitable substitute that Corsair could present today’s parts.

Each Vengeance LPX kit includes two double-sided DIMMs with eight 16gb (sixteen gigabit) ICs per side that have been disguised behind Corsair’s low-profile black-anodized aluminum heat spreaders. The math is pretty easy on this: Each side of a module has its own 64-bit interface that addresses one “rank” of memory. Since eight bits make a byte, eight 16Gb chips make a 16GB rank, and having two ranks of memory per module means that we get 32GB per DIMM and 64GB for this two-DIMM kit.

These are not the D9XPF we were looking for, but some not-yet-announced TQVV chips from Micron subsidiary SpecTek. While the Micron parts were rated at either DDR4-2933 or DDR4-3200, these are merely DDR4-2133 parts that Corsair has handily pushed to DDR4-3000 via a few minor overclocking tricks (voltage and timings) that have been programmed into its XMP profile. Motherboards that lack XMP capability can only configure these to that base value at best, though users are welcome to try manually configuring their memory if the board allows it.

Latency is measured in cycles, and cycle time is quicker at higher data rates. We’re accustomed to run-of-the-mill performance DDR4-3200 running at 16-18-18, but this kit has even longer 16-20-20 latency at a slower DDR4-3000 data rate. Part of that deficit is surely due to the ICs having twice as many cells, but we were hoping that some of the early performance modules would have up-spec chips to reduce the difference. Perhaps our attempts at manual adjustment will prove more helpful?

It’s been a while since we’ve reviewed any DDR4-3000, and our closest match is a group of DDR4-3200 modules at 16GB per DIMM. The difference in capacity shouldn’t matter from a performance standpoint, since our test suite is optimized for 16GB kits. Far more important is that Corsair’s 64GB Vengeance has the same number of ranks (four total) as Patriot’s 32GB PVS432G320C6K and G.Skill’s 32GB F4-3200C16D-32GVK, since our tests consistently show an approximate 10% performance advantage for having two ranks per channel rather than one.

Ah, but there’s also the Zadak Shield DC RGB DDR4-3200 kit, which has two of those special quad-rank modules mentioned above. It gets us to the same capacity as the 64GB Vengeance LPX, but by using twice as many chips at half the density. We’re fortunate from a comparative standpoint that four ranks per channel has little advantage over two, but using these special DIMMs did require us to switch back to a compatible motherboard, Asus’s Maximus XI Gene. The complete hardware set is carried over from its review, using a 4.80 GHz fixed CPU clock to further reduce non-memory bottlenecks.

Given the Vengeance LPX kit’s terrible XMP timings, we were really surprised to see that increasing its latency only slightly rewarded us with a maximum stable data rate of DDR4-3672. Going in the other direction, how much room for latency improvement did Corsair leave on the table?

Even our efforts at manual configuration got us only CAS 15 at DDR4-2933, but the difference in timings between DDR4-2933 and DDR4-3466 should have at least allowed Corsair to rate these at a higher DDR4-3200 data rate. Then again, the firm might just use better chips when it gets around to releasing a 64GB kit at that data rate.

As expected, the relatively low XMP data rate and poor timings really hurt the 64GB Vengeance LPX kit’s Sandra Memory Bandwidth, but tweaking these to DDR4-3466 CAS 18 made them almost competitive to the lower-latency 32GB kits. The almost-mythical Zadak Shield DC’s very good CAS 14 timings at DDR4-3200 gave it the edge at XMP settings, but it had little room for overclocking and was only compatible with a few boards.

F1 2015 loves memory bandwidth but also cares about timings, both of which are comparatively bad at the Vengeance LPX 64GB kit’s XMP. Tweaking it up to DDR4-3466 barely gets it into the same performance segment as the 32GB kits. The 32GB kits also lead in our 7-Zip compression time tests, where less time means more performance.

The unavailable Zadak kit’s value score is way off because its mythical $899 price never had to drop to keep up with this year’s pricing trends. Everyone else’s prices are current.

Corsair’s Vengeance LPX 64GB kit was roughly 6% slower than its 32GB competition, but its price-per-gigabyte isn’t bad. You’d need two of those competing 32GB kits to get to 64GB, but that only works if your board has four slots. Given current availability, most users with two-slot boards will find that Vengeance LPX is their best 64GB option.