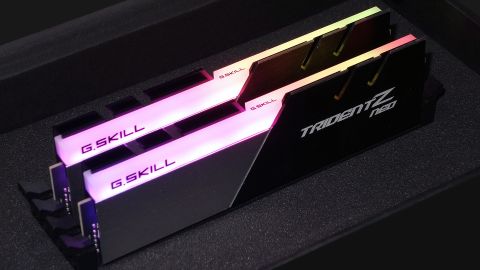 Desktop 32GB DIMMs need a total of sixteen 16Gb (16 gigabit) memory ICs (chips) per module, yet this level of density has only been around a few years. Even after the new chips were released, the pent-up demand in servers kept it out of the consumer channel until less than a year ago. Even after all that waiting, we had to wait for other IC manufacturers to release competing parts before an enthusiast brand was willing to risk putting its modules on our desks. And those were only DDR4-3000: Perhaps we should have been more patient?

With Samsung, Micron, and even its subsidiary Spectek in the rearview, G.Skill’s TridentZ Neo arrives with yet another unfamiliar IC, this time from Hynix. The JEDEC timings table appears to indicate that these are DDR4-2666-rated parts that G.Skill has overclocked to DDR4-3200 while retaining stability via the usual trick of a voltage increase. We should note that every high-performance kit we test is overclocking in this manner, with some of the fastest modules containing parts originally rated at a mere DDR4-2133. Still, it’s important to note that XMP must be enabled for the motherboard to configure this higher speed, that those who haven’t (or can’t) enable XMP will be stuck at DDR4-2666, and that this type requirement is common to all major manufacturers.

What appears to be middling XMP timings for DDR4-3200 are actually the best we’ve (yet) seen at this density, beating those of the previously reviewed DDR4-3000 in part because DDR4-3200 cycle time is shorter.  More information on the math involved can be found in our PC memory 101.

Seen lit at the top of this page, G.Skill’s software for TridentZ Neo can individually address each of the LEDs that shines through its translucent white light diffuser. Users who would rather synchronize their settings to those of their motherboard will find that ability, though there’s no guarantee of identical cycle time between the motherboard and memory in Rainbow mode.

We’re comparing G.Skill’s TridentZ Neo to the only other standard 2x32GB we’ve tested so far, Corsair’s Vengeance LPX. To see how these 32GB DIMMs compare to 16GB DIMMs of the same data rate, we’ve also included recent kits from OLOy and HyperX. Note that all four kits have two ranks per DIMM, with the primary difference being the capacity of each IC.

For the test platform, MSI’s memory-mastering MEG X570 Ace is controlled by AMD’s stellar Ryzen 7 3700X and fed by Toshiba’s OCZ RD400 SSD, while Gigabyte’s GeForce RTX 2070 Gaming OC 8G pushes any gaming bottlenecks back towards the CPU and DRAM.

We were surprised that neither of the 32GB kits could run up to DDR4-4266 on our platform, as we’ve seen older kits as low as DDR4-2933 hit that mark. Turning to the kit added today, the 64GB TridentZ Neo takes second place behind the 32GB WarHawk RGB. Given the G.Skill kit’s doubled capacity, kudos may be in order.

We pushed the TridentZ kit from its DDR4-3200 rating to DDR4-3600 after merely increasing its tRCD and tRP from 18 to 19 cycles. It’s timings match those of the smaller WarHawk kit for top honors!

Given that the 64GB TridentZ Neo matched the timings of the lower-capacity WarHawk RGB, one might expect them to have similar performance. Unfortunately, it’s harder for a memory controller to configure the larger-capacity DIMMs. We expected several of the motherboard’s advanced timings to be adversely impacted by the capacity increase, and we see a small loss in memory bandwidth. At least it outpaces the Vengeance LPX, right?

Though the difference of a few FPS might not be noticeable at these settings, the charted difference is large enough that it will certainly impact our value metric. TridentZ is much faster than Vengeance LPX at 64GB, but the 32GB kits are also much faster than the 64GB kits.

The same performance pattern we saw in games is repeated in 7-Zip, where compression time really can be noticed. This test isn’t able to take advantage of the greater capacity but instead turns the complex issue of advanced timings against the higher-capacity modules, where the TridentZ Neo’s advantage over the Vengeance LPX is stifled by the 32GB kit’s advantage over 64GB kits.

We probably didn’t need to tell anyone that the main reason 2x 32GB kits exist is so that owners with complex workloads can get the extra capacity they need to fit into a two-slot board, such as a Mini ITX workstation. To that end, we’re putting the per-gigabyte value chart on top of the performance-per-dollar chart.

Between the two charts, we see that the TridentZ Neo 64GB kit suffers a 2% performance loss in applications that don’t need more than 32GB, due to the advanced timing adjustments needed to deal with its greater complexity. That’s not much, particularly when one of the applications you’re using needs more than 32GB. Moreover, the TridentZ Neo 64GB kit offers 3% greater performance than the Vengeance LPX 64GB kit.

Value is where the TridentZ Neo takes its biggest hit though, as it costs $40 more than the Vengeance LPX. We’re not certain that even so large a price difference will sway its target market however, as we’re typically dealing with owners of $2000 to $4000 machines who, as enthusiasts and workstation owners, won’t be dissuaded from building with at least a DDR4-3200 data rate.