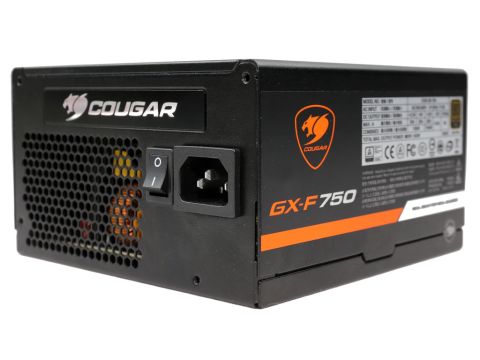 [Update, 4/18/2018: Cougar sent us a new sample which doesn't have a problem delivering more than its full power at over 45°C ambient]

Cougar has a new power supply family based on a fresh platform from HEC that offers good performance given the category's standards. Specifically, the GX-F750 addresses enthusiasts shopping for a high-performance PSU loaded with value. To be sure, this isn't the best performer, nor is it the quietest. But it still offers a number of nice features: compact dimensions, fully modular cabling, high enough overall efficiency, good transient response, and great ripple suppression. Our major complaint concerns the problems we had with our first sample at temperatures higher than 45°C, which led to its break-down during the overload tests.

Under real-life conditions, a 50°C rating might not be particularly important to most users. However, everyone can appreciate a relaxed fan profile, which the GX-F750 doesn't include. Given its current fan profile, the GX-F750 lands near Seasonic's popular 750W Focus Plus Gold, meaning that it is much louder than the RM750x. On the other hand, Corsair's PSU is larger and more expensive. Given Cougar's high enough efficiency levels and clean design, enabling increased airflow, we strongly believe that lower fan speeds wouldn't affect the GX-F750's reliability. If those few Teapo SC capacitors on the secondary side were replaced with KY (or even KZE) Chemi-Con ones, things would look even better.

Another improvement that Cougar could make would be the addition of a second EPS connector. With up to 750W of power, this PSU could easily support a potent workstation. The truth is that most high-end motherboards need more than one EPS connector to feed the CPU's voltage regulation modules. Especially with the release of AMD's Threadripper processors, all of which drop onto motherboards with two EPS connectors, many power supply vendors were forced to rethink their use of one EPS cable and plan future models with two.

We don't have a launch date for the GX-F750 here in the U.S. However, it should be available in Europe beginning March 6th for €100. Given that price, we believe Cougar will go with a $100 MSRP. If so, we'd expect the GX-F750 to compete readily against Seasonic's Focus Plus Gold, Corsair's RM750x, and EVGA's 750 G3. It is nice to see a plethora of options in the mid-wattage categories, and we welcome every new platform focusing on the achievement of high performance per dollar.

Prev Page Performance, Value, Noise & Efficiency
5 Comments Comment from the forums
Be In the Know