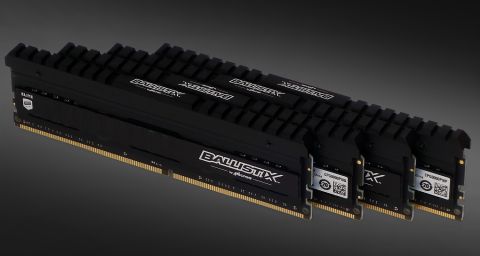 Crucial takes the concept of “more memory ranks” to its ultimate end by producing this four-module Ballistix Elite 4x8GB DDR4-3000 kit filled with dual-rank DIMMs. More ranks often means more performance when all else is equal, but all else can’t be equal when the additional components limit overclocking capability or latency optimization. By the end of our testing, we simply weren’t able to push the Ballistix Elite DDR4-3000 kit far enough to overcome the data rate advantage of its closest competitor.

Before we get into the details of this kit and our testing, we need to cover some background information. A memory “rank” is a bank of DRAM integrated circuits (ICs) traditionally referred to as a “side” in laymen’s terms, with each 64-bit module side holding up to eight ICs, and each IC having an 8-bit interface. A dual-rank DIMM has two 64-bit pathways, which are addressed by the memory controller in series (i.e., they’re on the same 64-bit memory channel).

Intel’s dual-channel CPU-integrated memory controllers have historically gotten a noticeable performance bump by switching from two to four ranks, but this didn’t appear to be much of an advantage until Teamgroup exploited it over a year ago with its Dark ROG 16GB DDR4-3000. The surprising result from that kit prompted us to test two, four, and even eight-rank configurations in a follow-up review. And the slight advantage of eight ranks over four appears to have prompted Crucial to produce the Ballistix Elite kit we're looking at today.

Selling as part number BLE4K8G4D30AEEA, the 32GB Ballistix DDR4-3000 kit we received contains four 8GB dual-rank modules and sells for $440. Quick math indicates that the only way to make a dual-rank DIMM at this capacity is to use 4Gb (four gigabit capacity) ICs. A quick check revealed that each module contains sixteen of Samsung’s retired K4A4G085WE-BCRC parts. It’s obvious that Crucial can’t produce an endless supply of modules from a stockpile of retired components, so the firm is instead adjusting its price to bring demand in-line with its limited supply. The “Elite” branding makes sense for that reason.

This Ballistix kit is priced similarly to competing DDR4-3600 options, but rated at only DDR4-3000. Getting the performance to match the price simply by using twice as many ICs seems a tall order for this XMP-configured CAS 15-16-16-35 set. On the plus side for users whose motherboards that don’t support XMP, its default DDR4-2400 non-XMP beats the DDR4-2133 defaults of most DDR4-3600.

Designed to look like traditional performance memory, the Ballistix Elite kit lacks LEDs, but instead includes a thermal module that’s supposed to be read using the company’s MOD Utility. Unfortunately, that utility is not compatible with our motherboard.

We haven’t received many non-lit RAM kits over the past year however, and our previous DDR4-3866 kit’s $536 price is beyond even the Ballistix Elite’s high-end market. We’re left with Kingston’s $400 four-by-single-rank HyperX Predator DDR4-3333 and G.Skill’s $360 two-by-dual-rank Trident Z DDR4-3000. Noticing that none of the kits hit DDR4-4000, and that comparing three kits (rather than four) would leave more room in our charts, we included our full range of DDR4-2400 to DDR4-3733 results.

The HyperX Predator kit was our only sub-$500 32GB non-lit kit to reach DDR4-3733, and it did that at respectable CAS 17 timings. Remembering that cycle time is the inverse of frequency, all three kits achieved full stability while using fewer cycles of latency at lower frequency. The Ballistix Elite’s extra ranks required slightly “looser” timings to pass the same stability tests as its rivals, but the extra ranks could still give Crucial an advantage in some of our benchmarks.

The extra ranks may have also limited Crucial’s overclocking capability, since more-complex modules are tougher for the system to configure, yet we’re still looking forward to a bandwidth advantage in sequential transfers, since a transfer to or from an open rank can be initiated while other ranks are already sending or receiving data.

Sandra’s Memory Bandwidth benchmark looks none-too-impressive for the Ballistix Elite at baseline XMP timings, yet the kit excels when manually configured to optimal DDR4-3200 settings. Yet while the Ballistix basically cleans up at DDR4-3200, the HyperX kit’s ability to reach DDR4-3733 puts it on top. Sandra Latency present another small problem for the eight-rank Ballistix Elite, but only when it’s compared to the four-rank HyperX Predator.

F1 2015 was the one memory-dependent application we expected to shine in the Ballistix Elite’s favor, thanks to a combination of more ranks and less-optimal timings, yet the Crucial kit only really wins at DDR4-3200 and is outshined even by the HyperX Predator’s DDR4-3333 XMP defaults. What’s worse for the Ballistix Elite is that it loses badly to the Predator kit in our 7-Zip file compression timed test.

Crucial’s eight-rank experiment on our Intel Coffee Lake platform met some success (F1 2015 at custom DDR4-3200 settings), but eight ranks of its lower-density ICs left little room for manual tweaking. Higher XMP values at a lower price and easier tweaking finally put HyperX Predator DDR4-3333 in the commanding position that its manufacturer was hoping the reach before recent price drops put it in the sub-$500 class.