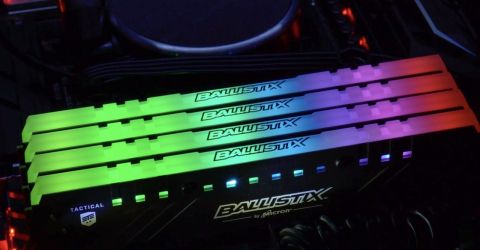 We’ve been surreptitiously collecting DDR4-2400 data on previous memory kits, so that we’d have it in the event of a review of sub-DDR4-3000 DRAM. That event has occurred in the Ballistix Tactical DDR4-2666, a set that still overclocks well-enough to DDR4-3200 to do so at 16-19-19-38 timings, despite its low rating.

Unfortunately for Crucial, every competing module set reach DDR4-3200 with at least three fewer cycles tRCD and tRP. Before we see the impact of those timings on measured latency, let’s take a look at the overclocks!

The Ballistix DDR4-2666 RGB memory overclocks past its cheapest competitor, Adata’s DDR4-3000 RGB, but didn’t have the tenacity to reach our next delta, DDR4-3733. Then again, neither did the Dominator kit.

Though its default DDR4-2666 timings left it far behind the higher speeds of competitors, the Ballistix Tactical Tracer RGB edged them out in Sandra Bandwidth when using optimized DDR4-2666 settings.  And its bandwidth deficit when overclocked to DDR4-3200 appears rather small, despite the mediocre timings we used to achieve that overclock.

Less latency means quicker response: Factory programmed timings are so relaxed for the Ballistix DDR4-2666 that its measured default latency is worse than the custom optimized DDR4-2400 timings of any kit tested.  Conversely, its DDR4-3200 performance was gangbusters.

Builders willing to give up ten to fifteen percent in F1 2015 performance, compared to faster kits, will have no trouble adopting the Ballistix Tactical Tracer RGB DDR4-2666. Those who care more about this title can try tuning the memory up at DDR4-3200 as we did, or start off with the DDR4-3000 version, if they want the same look.

Most games don’t respond as eagerly to extreme memory performance, and Metro does a fairly good job of representing that. You’d see a noticeable dip if the performance was truly bad, but instead we see only a 1 fps drop when operating the memory at its DDR4-2666 rating.

Remembering that less task completion time is also a great way to define “more performance”, 7-Zip shows precisely how slow the factory ratings of Ballistix DDR4-2666 really are. As our most memory-restrained test, it’s used to show the greatest impact memory bandwidth and latency can have outside of games.

If you weren’t inspired by the performance of Ballistix Tactical Tracer RGB at rated DDR4-2666 settings, you probably will be equally uninspired by its price. Available at most places for $440, even the discounted Newegg price of $410 is higher than that of the Adata XPG Spectrix D40 DDR4-3000. That argument is most applicable to our European readers though, since the four-DIMM kit is scarcely available in the U.S.A. In this country, Newegg and Amazon shoppers are stuck piecing together two of Adata’s D40 DDR4-3000 2x8GB kits…sometimes for even less money.

But, say you’re an American, with a Dell computer (no XMP), looking to buy a four-DIMM kit rather than piece one together from a pair of two-DIMM kits? You can’t easily find the Adata kit, and it’s the only alternative to offer a DDR4-2666 non-XMP setting. The highest non-XMP automatic configuration of the HyperX kit is DDR4-2400. The highest non-XMP automatic configuration of the Dominator kit is DDR4-2133. And just in case you think we’re stretching beyond reason to accommodate the Ballistix DDR4-2666 kit, we’d like to point you towards a similar discussion we had with an actual buyer.

Also worth considering is that while Ballistix offers an RGB program of its own, we haven’t seen a compatibility list. It didn’t work with our machine, and the lack of compatibility forced us to revert to MSI’s sketchy Mystic Light program to change modes (clicking “Apply” often made MSI’s program crash, but it usually didn’t when clicking “Save” instead). Systems that lack RGB control software could such as the above-mentioned Dell be limited to the default (white) lighting mode.

We could argue that the Ballistix heat spreaders and lighting bar look better than those of some competitors, but aesthetic arguments don’t win any value points. Crucial’s US-based support system is certainly worth something over a few of its foreign-based competitors, and it’s probably enough to bring it up to par value with the Adata set we compared.

Given that the faster comparison kits are even more expensive, that Ballistix RGB lighting adds $60 to $80 to the street price compared to similar Ballistix memory, and that a few competitors are even offering a premium DDR4-3200 RGB kit for the same price as these Ballistix DDR4-2666 modules, the extra credit still doesn’t push it past a three on our new rating system. Even though these modules are highly overclockable, systems that don’t support data rates beyond DDR4-2666 are the most-appropriate market for the Ballistix Tactical Tracer RGB DDR4-2666 kit.