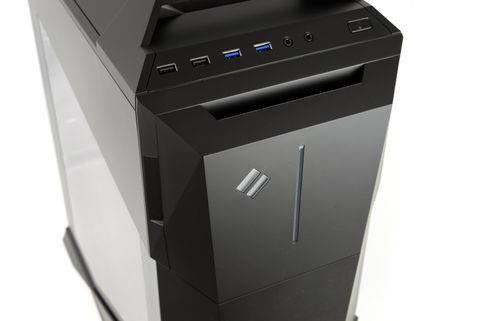 The CyberpowerPC Syber M Xtreme 400 is a compelling option for anyone looking to tango with an X99 platform. The custom-designed chassis stands out against similarly priced competition, and the factory-overclocked graphics card and speedy memory further justifies its overall value. Although we weren't thrilled with the conservative overclock and uninspiring SSD performance, the Syber M Xtreme 400 contends with Z170 platforms with higher-clocked CPUs while offering more PCIe lanes and processing cores than the i7-6700K-equipped systems. The Syber M Xtreme 400 earns CyberpowerPC a Tom's Approved award for its unique design, competitive performance, and reasonable price.

When CyberpowerPC heard we were back in the gaming desktop review business, the company was anxious to get its Syber M Xtreme 400 in our hands, and we were excited at the prospect of testing an entry-level X99 platform against our recently-reviewed Z170 systems to see if the performance of a six-core Intel Core i7 processor and a factory-overclocked GeForce GTX 1080 graphics card could warrant the $2,200 price tag. Time to see if the Syber M makes the grade.

The CyberpowerPC Syber M Xtreme 400 features a custom-designed ATX mid-tower chassis with an angular, yet sleek appearance. For a mid-tower case, it’s sizable, measuring 18.26 x 8.66 x 20.82". It also comes loaded with aesthetic extras, including orange LEDs that adorn the optical drive bay access door and a grill underneath the front end of the case that projects the Syber logo. This chassis is unique among the other desktops we’ve tested, and you won’t find it anywhere else, except from CyberpowerPC.

The top of the case features a removable ventilated panel that gives you access to the backside of the 240mm water cooler, making it easy to clean. The left side panel window showcases an LED-illuminated PSU shroud bearing the Syber logo, with a clear view of the GPU, motherboard, and its other attached components. However, aside from the PSU shroud and GPU LEDs, the interior of our review sample lacks additional lighting, leaving the upper part of the motherboard in the dark. However, if you're partial to well-illuminated interiors, the company also offers remote-controlled RGB LED strip options for the Syber M Xtreme 400.

The rear motherboard panel sports a USB 3.1 Type-C and Type-A port (one each) capable of 10Gb/s data rates. The Type-C port also features 40Gb/s speeds with Thunderbolt 3, and it can provide video output at up to 4096 x 2304 at 60Hz. However, because the X99 platform doesn’t have integrated graphics, the motherboard comes with an adapter cable that allows you to connect one of the dedicated GPU’s DisplayPorts to the motherboard’s DisplayPort input to enable video output through the USB Type-C port. It’s a neat feature, but we can’t see many people being in a position where they would need to connect a display to a Type-C port over the GPU's DVI-D, HDMI 2.0, or three DisplayPort interfaces.

The Syber M Xtreme 400 is equipped with an Intel Core i7-6800K processor, which features six cores and 12 processing threads. CyberpowerPC overclocked the CPU cores, with single and dual-core operation hitting 3.8GHz. However, engaging more than two cores will limit the CPU multipliers to 35, resulting in a 3.5GHz maximum frequency.

These aren’t huge gains by any means (the base frequency of the CPU is 3.4GHz), but the $19 Pro OC overclocking service guarantees up to a 10% gain or more, and that’s exactly what you get (around 11%, at least, with dual-core operation). An all-core clock frequency of 3.8GHz would have been considerably better, and maybe that’s what you get with the Extreme OC service, which guarantees up to 15% (or more) performance from the base CPU clock rates. However, we don’t get that treatment with this particular review sample, and we’ll have to reserve judgement until we see how the CPU tuning plays out in our benchmark suite.

The processor is seated in a Gigabyte X99P-SLI motherboard. Four of the eight memory DIMM slots are occupied with a 16GB (4 x 4GB) kit of ADATA XPG Z1 DDR4-3000 memory, with CAS timings of 16-16-16-37. The quad-channel memory controller and above-average frequency should provide excellent performance in memory-intensive workloads, despite the somewhat-standard capacity.

Loaded with an Intel Core i7-6800K, the 28 PCIe lanes running to the motherboard support up to 4-way AMD CrossFire and 3-way Nvidia SLI (900 series and below) configurations, with three slots operating in x8 mode and the bottom x16 slot operating in x4 mode when occupied. There also two PCIe 2.0 x1 slots to add a wireless or capture card. The main x16 slots also feature stainless steel shielding that reinforces the PCIe connectors with extra strength for heavy graphics cards.

The M.2 slot is loaded with a 512GB Intel 600p NVMe SSD, and the 2TB HDD is mounted in the 3.5" drive bay (which is accessible from the right side panel). This is plenty of storage for the average user, and the SSD capacity is par for the course. Further expansion options include multiple SATA 6 Gb/s ports (for a total of 10), two of which make a SATA Express connector.

The single EVGA GeForce GTX 1080 SC graphics card features a base clock of 1,708MHz and a boost frequency of 1,847MHz, which should (on paper) provide a modest performance boost in games and GPU-intensive tasks compared to graphics cards with reference (Founder’s Edition) clockrates. CyberpowerPC ships the Syber M Xtreme 400 with the latest version of the GPU, with the updated VBIOS and added thermal pads, so we shouldn’t run into the same temperature issues some were reporting with the ACX 3.0-cooled graphics card prior to the update.

The CPU is cooled by a beefy Asetek 570LXL LCS closed-loop liquid cooler, which features a 240mm radiator and a copper cooling plate. The radiator sports two of the 120mm Corsair AF120 fans, exhausting heat out the top of the case. Two more of these fans adorn the front of the chassis, which pull air from the illuminated grating on the bottom front end of the PC. There’s also a Corsair AF120 fan exhausting air out the rear, and the upgraded fans account for $63 of the bill ($24 for radiator fans, $39 for case fans).

The Syber M is powered by a Corsair CS650M 80 Plus Gold certified power supply, which is hidden by a sleek PSU shroud and features a single 12V rail with 51A of juice. Although this is plenty of power for the system as it’s configured, we’re somewhat put off by the seemingly-minimalist wattage. However, if you want to upgrade to something with more power (if you’re looking to upgrade to SLI down the line) then you’ll have to throw a little more money down.

The case’s power supply fan intake has a built-in removable filter, making it easy to clean. The semi-modular PSU’s attached ATX and CPU power cables are braided, but the modular PCIe, SATA, and molex cables are flat and smooth, so they aren’t the easiest to tuck away inconspicuously. However, CyberpowerPC’s cable management leaves the visible interior looking clean and tight. The right side panel hides the excess (and 3.5" drive bays), with everything tied up as neat as one could set it, considering the mix of PSU cables.

We’ve omitted this section in our other recent desktop reviews, primarily because those vendors didn’t ship their products with any additional pre-loaded software or accessories, such as a keyboard or mouse. CyberpowerPC didn’t do much in the way of software, but it did load the Intel Turbo Max Technology 3.0 software, which allows you to select specific programs and give them a boost in single-threaded clock frequency. However, we left this utility unaltered, and it wasn't enabled in our testing. Other than that, there isn't any additional pre-loaded software.

However, you do get a motherboard box full of the component’s manuals and accessories, including additional PSU and SATA cables, the case’s PCIe lane plates and 3.5" bay cover, multiple color assortments of rims for the upgraded Corsair fans, and that DisplayPort adapter that we mentioned earlier (to enable USB Type-C video output).

The Syber M also comes with a company-branded gaming mouse, with an LED-lit logo and multiple gamer-centric buttons. The center buttons below the scroll wheel adjust the DPI on the fly, and there are also sniper and turbo shot buttons, along with forward and backwards movement buttons near the thumb rest. Under the bottom cover, there are five weights you can remove to adjust how it feels in your hand, and the mouse is a nice bonus that doesn’t affect your price tag.