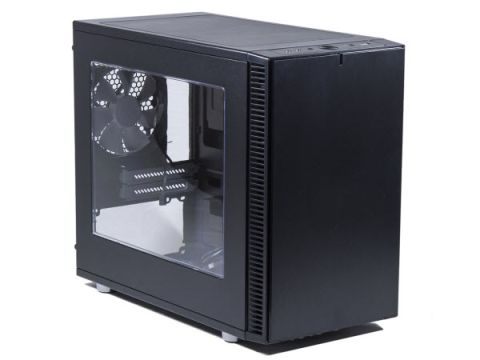 The Define Nano S is an excellent case for anyone looking to assemble the ultimate mini-ITX build. Although it may be a bit large for some purists, the extra room will be more than welcome by those who want to build small without sacrificing performance. Finally, its $70 price tag provides the ultimate value for builders looking for a mini-ITX case.

Fractal Design's newest case brings the clean look and water cooling oriented design of the Define S to the mini-ITX form factor. The Define Nano S is intended for those who want to create the ultimate mini-ITX build but don't want to sacrifice the performance or silence they get with their larger builds.

While the case seeks to balance size with silence, it seems to put more of an emphasis on silence. Coming in at 13.5" high by 16.2" deep, it's not exactly the smallest mini-ITX case on the market, but it makes up for its larger size with a rich feature set and a well-thought-out build area. The Nano S also improves upon the sound dampening of its larger counterpart with added dampening on the top and front panels in addition to the right panel, and the left panel on the windowless version.

The front panel connectors are positioned squarely on the top panel at the front of the case, and are easily within reach regardless of which side of the case you're sitting on. The front panel includes two USB 3.0 ports, headphone / mic jacks, a reset button and a power button. Both the power and reset buttons feel very sturdy and respond with a positive click when fully depressed. A small cutout below the power button exposes the blue power LED, which not only lights up a ring around the power button but also doubles as the hard drive activity light.

The top of the Nano S comes covered by default with a removable panel featuring Fractal's ModuVent sound dampening technology. Once removed, the Nano S supports the installation of either a 120mm or 240mm radiator for water-cooling, or up to two 120mm fans for better ventilation. The mounting holes for either cooling option are positioned very far to the side and should provide ample motherboard clearance for large radiators.

The back panel of the case includes a vibration dampening, foam-lined cutout for PS/2 power supplies, as well as an oversized mount for a 120mm cooling fan or an optional 120mm radiator. Like the larger Define S, the Nano S also lacks ports for external liquid cooling options.

The interior of the Nano S provides ample space for most mini-ITX builds, and includes an extensive amount of water cooling support. The case comes with predrilled holes towards the front of the case for mounting reservoirs, with a maximum distance between screws of 270mm vertically by 80mm horizontally.

The interior of the case also features Fractal Design's asphalt sound dampening sheets on most of the internal panels including the top, front and right panels. Users that option for the windowless version of the Nano S also get sound dampening on the left side panel.

The front of the Nano S comes with a preinstalled 140mm fan, which is removable for the installation of radiators up to 280mm in size.

One of the pros of the Nano S is how much space is available behind the case's right panel for cable management and the installation of accessories. The motherboard tray includes a sizable cutout that not only allows for easy access to the back of the motherboard, but also doubles as a place to install two SSDs or 2.5" hard drives up to 13mm thick. There's also plenty of hardware for cable management including several preinstalled hook and loop tie downs, as well as several anchors for using the included zip ties.

Next Page The Build, Test Results And Conclusion
36 Comments Comment from the forums
Be In the Know