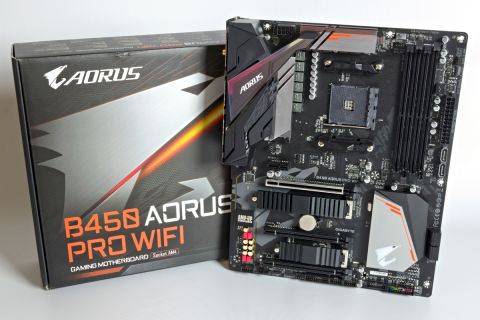 We’ve been quite successful with our latest test bench in generating adequate overclocks, with Prime95 as our CPU workload and AIDA64 driving our memory tests. Having been spoiled by our X470 coverage, it’s time to see how these lower-tiered boards fair. Jumping into the UEFI, we kick the multiplier up to 40.0 for initial testing and both thermals and stability are in line with expectations. Multiplier increases in 0.25 steps get us all the way up to 4100MHz without adding any additional voltage. As we increment the voltage (with 6.25mV step sizes), we observe that this board does not support load line calibration changes. We confirmed with Gigabyte that the analog IC’s do not support loading changes, so we won’t be expecting a UEFI patch for that.

As we increase the voltage, we start to see a frequency overclock threshold of roughly 4175MHz, where the system becomes unstable in Prime95 with varying times to fail. Increasing the voltage up to a +204mV offset, we finally reach the regulator's adjustment limit through UEFI. Regulator temperatures are a toasty 113 C at those settings, which seems hot but is within the safety limits of the PowerPak MOSFETs. Turning down the clock multiplier in our search for stability, we find an effective maximum rate of 4125 MHz.

At this point, we have lots of voltage headroom to play with, so for this board, the regulator design is sufficient. The Gigabyte B450 Aorus Pro WIFI’s Vreg heatsinks certainly appear to be underdeveloped, and could use some additional slots in the slabs of alloy for an increased surface area. There are some videos out on the web questioning Gigabyte's claim that it utilizes eight “real” phases, but the implemented design appears adequate for modest overclocking. And AMD's 2nd Generation Ryzen chips don't tend to clock significantly higher than 4GHz anyway.

Gigabyte’s X470 board showed exquisite memory overclocking. So we were optimistic when firing up our DDR4-3466 Corsair Dominator Platinums in the lesser B450 board. Shockingly, the system is able to boot at the default XMP profile, but it only got through about two seconds of AIDA64 before the workload crashed. Without load line calibration, we have to dial down settings to gain stability, and we brute force it with the memory multiplier. In 66MHz steps, we have to dial down to DDR4-3266 before we see AIDA64 run for 30 minutes without erroring out. Looking back, this is huge victory compared to B350, and even rivals some of the X470 variants on the market.

As a high-end offering for its mid-range chipset, the Gigabyte B450 Aorus Pro Wifi draws on the Aorus brand for inspiration, but just barely misses the mark in terms of raw performance. However, this board is well equipped in certain areas that make it a much more straightforward purchase for anyone that is interested in good aesthetics.

Going back to the questions we posed earlier, does the B450 stand up to X470? For the most part, yes. From a raw performance perspective, the chipset can deliver performance that is in line with our 2700X expectations. But that comes at the cost of certain features and quality of life enhancements, namely improved regulator designs, voltage controls, and slight increases in IO.

Next, do we consider this “premium” mid-level board better than a “value” high-end board? Yes, the Gigabyte B450 has features that elevate it above the designs of previous value-oriented boards that make it a clear and easy pick above the X470 chipset. Given our overclocking success and reliability concerns of other designs, the B450 is better suited for a broader audience.

Coming in at a shockingly affordable $120 MSRP, it's hard to argue that Gigabyte doesn't deliver a heaping bucket of value with this board. Sure, some features that come with higher-range chipsets aren’t available, but there has to be some substantive feature delineation between the premium chipset and the one that's a step down.

Gigabyte's inclusion of Wi-Fi, appropriate overclocking for this market segment, and features ideal for a gaming build make the Gigabyte B450 Aorus Pro WIFI an excellent choice for someone that isn't willing to drop the coin to jump up to a higher-end package. So long as you aren't plugging in a second graphics card, a big bank of drives, or lots of bandwidth-craving USB devices, the $50 savings this option offers over some of the other X470 options is better spent on a new AAA title, a more spacious and/or speedy boot SSD, or a graphics card upgrade.

Prev Page Test Results: Synthetics, Games, Power and Thermals
6 Comments Comment from the forums
Be In the Know