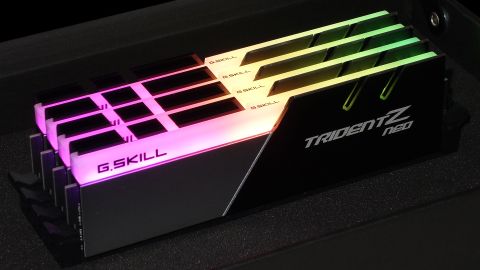 Buyers who aren't satisfied by AMD’s ordinary DDR4-3200 recommendation should be happy with G.Skill’s Trident Z Neo DDR4-3600 C16 kit. The attractive heat spreaders will also dress up their build, along with bringing a speed increase.

One of the great advantages of AMD’s new Ryzen 3000 series is supposed to be its advanced memory controller that doesn’t require AMD-specific optimization, but that doesn’t mean memory manufacturers and value-added resellers (VARs) won’t try to differentiate these products. After all, filling every niche can be a great way to set your brand apart from competitors. And sometimes optimization really can make a difference. Enter G.Skill’s Trident Z Neo, the first “AMD Optimized” series to be launched post-Ryzen-3000.

The first thing we noticed about the new modules is the modified heat spreader design that has a diagonal line separating the black anodized and bright silver portions, whereas the former Trident-Z RGB had a vertical crease. The clean split in color comes from the silver portion being inlaid atop a recess in the black portion.

One might think that an AMD-optimized kit would use AMD AMP rather than Intel XMP, but AMD’s answer to Intel’s memory overclocking profile never really caught on. Maintaining broad compatibility thus leaves us with an XMP configuration of DDR4-3600 at 16-16-16-36 timings and 1.35V, as well as a slow DDR4-2133 as the highest fallback setting. Our test board didn’t even pick one of the DDR4-2133 profiles, instead reverting to DDR4-1866 C13 before we enabled XMP.

In the fight for control between G.Skill’s RGB utility and the one supplied by MSI for our motherboard, MSI won. Every time we set a different mode in the G.Skill utility, it would revert to the MSI setting a few seconds later, even though we didn’t have the MSI version running. That’s a shame, since only the G.Skill utility let us set the color for individual LEDs, and since the MSI utility couldn't synchronize “Rainbow” scroll speed between the motherboard and DRAM lighting.

Other modes for MSI’s utility did synchronize timing, and we needed the MSI utility to set the motherboard’s LEDs. So why install G.Skill’s? Because the ENE IO Driver that the MSI utility needs in order to control the DRAM lighting is included in G.Skill’s software package. Once that’s installed, the control GUI can be uninstalled separately.

DDR4-3600 hasn’t always been easy to reach with four modules, and that limited our choices of comparison hardware. Adata for example sent its XPG Spectrix D41 as the part number AX4U360038G17-QR41 kit, but we could only use two modules in its review since that’s the only way you can buy them in the US: double the twin-pack price to get the same four modules. At the other end of the pricing spectrum, Corsair’s Dominator Platinum at least offers the same CAS 16 as the Trident Z Neo kit.

Thanks to its ability to push our old DDR4-2933 kit up to DDR4-4333, we used MSI’s MEG X570 Ace motherboard, along with the hardware from its review, to test each kit at a variety of data rates and timings.

The Trident Z Neo takes second place in memory overclocking on our board, when relying only upon relaxed primary timings to reach DDR4-4000. Tighter advanced timings can play a role here, so let’s see what we can do to get primary timings under control:

The same Adata kit that hit the high overclock also hit the low CAS number at DDR4-3733, but there wasn’t enough stability left to drop any of the other timings below that of competing modules. Corsair's Dominator Platinum RGB required 2T timings at both DDR4-3733 and DDR4-3200, while both the Trident Z Neo and XPG Spectrix D41 worked at 1T. Also, since we’re only (so far) able to reach super-high frequencies with two ranks of memory installed, none of the kits could be tested at DDR4-4266.

Straight CAS 16 timings pushed the XMP of G.Skill’s Trident Z Neo to the front in our bandwidth chart, but “what gives” on the DDR4-3733 bandwidth? It turns out that Sandra’s Bandwidth test uses packets that are small enough for the test to be impacted by latency. By default, X570 motherboards drop the memory controller to CPU ratio from 1:1 to 1:2 when DDR4-3600 is exceeded.

For a performance metric, games with the EGO engine respond well to improved memory bandwidth and timings only after getting GPU and CPU bottlenecks out of the way. Even at a mere 1080p, the Ultra High Quality setting appears to be at the precipice of a CPU bottleneck with the Ryzen 7 3700X locked at 4.20 GHz. We still see some benefit to running DDR4-3600 C16, but barely.

Facing similar constraints in each of our new benchmarks, we reverted to our old 7-Zip workload to show that yes, DDR4-3600 really does perform better. Unfortunately, it doesn’t perform much better than timing-optimized DDR4-3200. That’s the setting where G.Skilll’s Trident Z Neo wins this benchmark.

As we continue to search for better reasons to purchase DDR4-3600 for your Ryzen 3000-series platform in coming weeks, it’s already clear that G.Skill’s Trident Z Neo has the stability we need to test a variety of data rates at optimal latency settings. The only problem for G.Skill is that one of its competitor’s kits does the same thing at a lower price.

G.Skill has a leg up on availability that will likely be the deciding factor for many builders, as the lower-priced competing kit that we used can currently only be purchased in packs of two. While two packs of two will usually function as a pack of four, there’s always a chance that it won’t, and a few customers will probably end that experiment in frustration.

While enthusiasts might expect to pay a little extra for a pack of four modules that’s been tested together to work at high speed, a portion of that extra price is the for the premium heat spreaders that are designed to make your PC look expensive.  That upcharge is even more pronounced for the competing Corsair modules, where yet another premium is tacked on for the modules having more RGB channels (and brighter RGBs), and still another so that fewer buyers of a lower-volume product can bear the cost of development. Falling in the middle of that price scaling mess and offering a competent performance package in the process, the C16 version of Trident Z Neo DDR4-3600 is a competent kit.