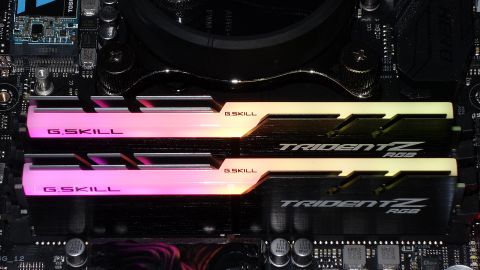 We could easily recommend the 2x16GB version of G.Skill’s Trident Z RGB DDR4-3600 C17, if only we could find it consistently in stock. If you’re interested and find it in stock at a reasonable price, snatch it up. But we don’t recommend waiting for availability when the market offers so many other compelling options.

G.Skill’s Trident Z RGB DDR4-3600 presents a compelling value argument at its current $225 price. But in a market that rarely sees too much of a good thing, the kit offers too little in the way of availability, at least in the US. A far-higher £350 price in the UK helps explain why it hasn’t sold out there.

Our attempts to formulate a coherent recommendation have gone back and forth as US inventory has been depleted twice in two weeks. At that point, we threw in the towel. It’s a nice kit if you can find it at current US pricing, but unless you’re willing to wait and strike when stock arrives at your outlet of choice.

G.Skill’s second kit in our recent spate of  2x 16GB DDR4 reviews, the Trident Z RGB (part number F4-3600C17D-32GTZR) hits the high end of the performance enthusiast market with enhanced frequency, reasonable timings, stylish brushed-aluminum heat spreaders, and RGB lighting. The stylish heat spreaders even have a dark side and a light side to balance their appearance.

This kit’s XMP rating matches that of our recently-tested Kingston DDR4-3600 kit, offering 17-19-19-39 timings at its full data rate while using 1.35V. G.Skill doesn’t provide a lower XMP value for boards or CPUs that can’t make it to DDR4-3600 however, and its highest non-XMP configuration is only DDR4-2133.

Because the gap between the rated and basic settings is so wide, buyers should be very careful to make sure that all of their hardware supports the higher data rate. While manual configuration offers a third alternative to people who aren’t afraid to poke around in firmware, stability testing after every tiny adjustment requires patience.

While TridentZ RGB is supported by the RGB software of most motherboards (ASRock, Asus, Gigabyte, MSI), the use of third-party software is not purely required: G.Skill’s own RGB Control utility is free to download, and the firm offers an alternative version to those who experience any compatibility issues.

Because they have the same data rate and timings, the previously-reviewed Predator DDR4-3600 kit should be a perfect match to this review’s Trident Z RGB contender. Since the only other 2x 16GB kits recently tested were DDR4-3200, two of those kits fill the bottom of our charts.

The Trident Z RGB kit we received barely overclocked beyond its XMP values, handing an easy overclocking win to the Predator non-RGB kit. Benchmarks should indicate whether this has anything to do with the way this motherboard’s firmware is configuring the modules.

Despite its lesser overclock, the Trident Z RGB DDR4-3600 far outpaced the Predator DDR4-3600 in latency reduction. Maybe the mid-market timings were a sign that these modules were close to their limit? While that would certainly explain the poor overclocking, the ultra-low CAS 15 straight timings at DDR4-3466 are likely to outperform its DDR4-3600 XMP. This is also the first DDR4 kit we’ve tested to support DDR4-2400 CAS 10, making it some of the quickest memory we’ve tested.

Even though the SiSoftware has obviously attempted to optimize its batch sizes for various benchmarks, latency still impacts its bandwidth bench and vice versa, so that DDR4-2400 CAS 10 could never match DDR4-3600 CAS 15, even though these have mathematically equal latency.

Given the impact of latency on its Memory Bandwidth score, we’re a little surprised that the Trident Z’s optimized DDR4-3466 timings didn’t provide bandwidth parity to the same kit’s DDR4-3600 17-19-19 timings. On the other hand, timing optimizations provided reduced latency for all values (even DDR4-2400) compared to its baseline.

Trident Z edges out HyperX Predator in F1 2015, but gets edged out in 7-Zip file compression, when both are at XMP values. Memory geeks who prefer to use their own timings should have a little better luck with the Trident Z, however, as its tweaked DDR4-3466 setting beat everything.

Frugal buyers will say that chasing performance beyond DDR4-3200 is a sucker’s game, but too many of us are suckers for performance for any of us to write-off a percent or two gained. The only value competition that matters to DDR4-3600 buyers is between the two DDR4-3600 kits, where the G.Skill kit was priced $18 less at Newegg (the cheapest seller) than the Kingston kit was at Amazon (likewise, the cheapest seller). And then it wasn’t, and then it was again. G.Skill is having difficulty keeping its stock of these modules replenished.

Finding a set of RGB memory at a lower cost than the competing non-RGB kit is a value win for RGB aficionados, and G.Skill even offered a non-RGB version of this kit at an even lower price. The problem for G.Skill is that it’s tough to recommend a product that’s not consistently in stock. Or maybe that’s our problem, since we’d love to recommend this kit if were in stock more often than not .

At the time of this writing, buyers willing to pay twice as much could find one kit remaining at an Amazon partner seller, but at that price it should remain in the seller’s inventory.