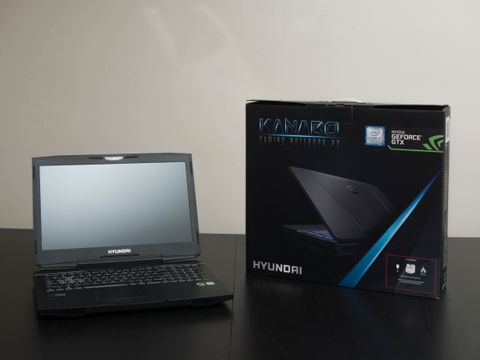 The Kanabo’s top competitor is undoubtedly the Acer Predator Helios 300, another GTX 1060-based model, which received our pick for Editor’s Choice for its outstanding value and performance. The Acer device contains an i7-7700HQ, 16GB of DDR4-2133 memory, a 256GB M.2 SSD and a 15.6” FHD display. It's available for $100 cheaper than the Kanabo, so the deciding factor between the two comes down to battery life, thermals and display quality.

The Dell Inspiron 15 7000 Gaming is the lowest end system in our roundup and the first laptop we’ve tested with a Max-Q GTX 1060. It's considerably more affordable than the previous two laptops. The device is equipped with an Intel Core i5-7300HQ, 8GB of DDR4 memory, a 256GB M.2 SSD, a 1TB HDD and a 15.6” FHD IPS display. The Inspiron’s performance will provide insight as to whether an energy efficient Max-Q GTX 1060 can compete with its full-fledged variant.

The highest end system in our roundup is the MSI GE63VR Raider. It contains an i7-7700HQ, a standard GTX 1070, 32GB of DDR4-2400 memory, a 512GB M.2 SSD and a 1TB HDD. It also has a 15.6” FHD matte display with a 120Hz refresh rate, allowing it to take advantage of the GTX 1070’s performance in titles where it delivers higher than 60 FPS. The MSI Raider represents the amount of performance gamers can expect from investing nearly double the Kanabo’s price.

3DMark’s game-like workloads give us a sneak peak of our roundup’s gaming results. The Hyundai Kanabo 15 offers about as much graphical performance as the Acer Predator Helios thanks to their similar configurations. The Kanabo also delivers a fair amount of extra performance over the Dell Inspiron 15 7000 and its Max-Q GTX 1060. We found that the Kanabo’s i7-7700HQ slightly outperformed the rest of the i7-based laptops during the Physics test.

3DMark is our main graphical synthetic benchmark, whereas Cinebench measures CPU prowess, particularly the single and multi-core tests. On the other hand, the OpenGL shading test is platform-based, with a slight preference for GPU strength.

We previously mentioned how well the Kanabo’s i7 performed in 3DMark’s Physics tests. It’s CPU goes above and beyond yet again, scoring as much as 15 points higher than the other i7s in both single core and multi-core performance. However, the platform-based OpenGL shading test illustrates the Kanabo’s lack of GPU power in comparison to MSI’s Raider and Stealth Pro.

CompuBench offers a platform-based Video Processing test and a GPU-bound Bitcoin Mining test, which complement our 3DMark benchmarks. In CompuBench, a strong GPU can offset a low-end CPU. The Kanabo delivers similar scores due to their identical configurations, while outperforming the Inspiron 15 by 13 percent and 23 percent in Video Processing and Bitcoin Mining, respectively. The more powerful Stealth Pro and Raider don’t outperform the Kanabo in video processing by much, but offer far more Bitcoin Mining performance.

We perform an IOmeter test on each laptop’s primary drive to measure basic random and sequential read and write speeds. The Kanabo contains a 128GB Phison SM280, the first of its kind that we’ve seen in a gaming laptop. The Acer Helios has a 256GB Micron 1100. MSI utilizes a 256GB and 512GB Samsung PM871 SSD in the Stealth Pro and Raider, respectively. Finally, the Inspiron is equipped with a 256GB Samsung PM961 NVMe SSD.

The Kanabo’s Phison SSD offers the slowest 4K random (QD2) speeds, which is regrettable considering the faster alternatives that competing vendors have sourced. The Phison will launch your favorite applications faster than an HDD, but the experience won’t be as seamless as compared to the Helios or even the Inspiron. It has even slower 128K sequential speeds, which are barely faster than an HDD.