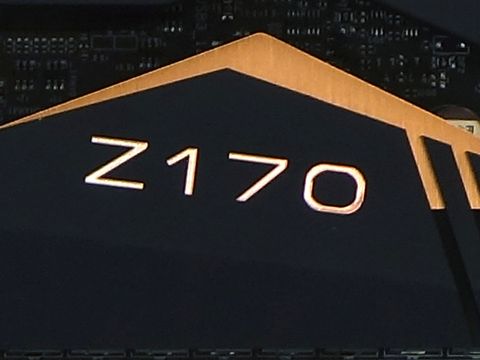 We’re not able to use our reference test system’s LGA 2011-v3 processor or its motherboard to test LGA 1151 platforms, nor could we expect much memory overclocking from its DDR4-2400 quad-channel kit. But the rest of the system remains valid for this platform’s benchmarking and overclocking needs.

3DMark and PCMark show little performance difference between the three LGA 1151 motherboards in today’s test, but the Z170 Extreme6 does have a small glitch in Encoding/Decoding turnaround from Sandra Cryptography.

That small blip in the Cryptography module is caused by a small deficit in memory bandwidth. Perhaps ASRock was shooting for stability? Overclocking will help to determine that.

All three boards look similar in games until we get to Far Cry 3. Several retests did not reveal the cause for performance differentiation in this one title, but the difference was small enough to negate the need for lengthier investigations. It is, after all, just one of the four games tested, and synthetics didn’t reveal a reason for the lowest-bandwidth board to have a 3D performance advantage.

Less time means more performance in timed benchmarks. The Z170A Gaming M7 takes a small lead in the A/V encoding suite, but nowhere else, and by not enough to make a noticeable difference overall.

The C7Z170-SQ doesn’t have a bunch of added controllers, and it also has the lowest maximum and minimum power readings. The Z170 Extreme6 isn’t far behind, while the better-equipped Z170A Gaming M7’s extra components consume a little extra energy.

The result is a 2.5% efficiency lead against the average of all three motherboards for SuperMicro’s C7Z170-SQ. The Z170 Extreme6 takes second place, while the Z170A Gaming M7 is the part that pulls the entire class average for efficiency in the wrong direction.

Prev Page Supermicro C7Z170-SQ Next Page Overclocking, Value And Final Analysis
58 Comments Comment from the forums
Be In the Know