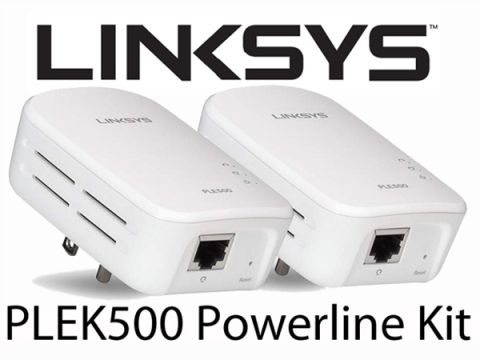 The adapter's form factor is similar in proportion to the D-Link DHP-600AV we reviewed in our round-up, except its chassis is more rounded. The PLEK-500 has what shows as a slight decline from the outer edge to the wall-adjacent edge, which provides clearance for a three-prong cable plugged in above from a slight angle. When comparing wall protrusion to the D-Link DHP-600AV, the Linksys PLEK-500 seems to stick out a little farther than an inch and a half.

There's a gigabit Ethernet port on the bottom, next to which is a hardware factory reset button. On the right side, seen in the picture above, you'll find the security button. Pressing it on one of the two Powerline adapters starts the re-sync process, and a randomized encryption key is generated.

There are three LEDs: Power, Powerline and Ethernet, and they indicate different statuses. While the Power LED is an on/off indicator similar to the Ethernet LED, the Powerline LED actually fluctuates between green and yellow. Yellow indicates a transmission rate lower than 15 Mb/s, while green means your transmission rate is above 15 Mb/s.

In this case, Linksys provides a software utility for advanced configuration. Although it's not included in the starter kit, you can download it from the company's support site. Prior to using the utility, make sure that your Linksys PLE-500s are plugged in and accessible. Once you launch the tool, you'll see it has three tabs (as shown in the screenshot below).

Network Status is the first tab. We can see in the Devices List window the adapters discovered, along with the model number, MAC address, throughput quality and device password.  Under Detail Information you'll find the firmware version, which could be handy if Linksys pushes out an update at some point in the future.

On the Security tab, you can set the Network Membership Key for selected devices. The default key is printed on the back of the Powerline adapter.

The Administrator tab lets you restart the adapter, set it to factory defaults or upgrade its firmware.

I didn't need to use the advanced utility during testing, but it's nice to know you can upgrade the firmware this way.

The first step in cracking open any case is to try to figure out if there are hidden screws. Some vendors hide them under rubber guards, but in this case, I found a screw behind the serial number bar code.

I cut away the relevant part of the label to reveal a hex-sided screw. With it loosened, the next step was to feel around the edges and find the plastic clips that needed to be depressed.

You can tell in the picture above and below that I had to do some guess-work to figure out exactly where those plastic clips were. To save you some time in case you want to break open the case yourself, here they are highlighted:

With the top off, we can get a sense of the parts inside:

Qualcomm Atheros QCA7450/AR1540: According to a 2012 press release, this chipset is marketed by Qualcomm as its first that complies with the HomePlug AV2 specification. Reportedly included is a "SmartLink Plus" option to enable Powerline signal transmission on multiple wires. The SmartLink Plus option is elaborated on in this press release as utilizing all three electrical wires: line, neutral and ground. In the HomePlug AV2 specification, MIMO is a required capability, so this may be Qualcomm Atheros' implementation of that requirement,

UMEC UTB02123: This is a "Flyback Transformer" cited on the UMEC website as "reinforced" for the Atheros AR7450 chipset.

Prev Page Specifications, Features And Accessories Next Page Test Results And Conclusion
11 Comments Comment from the forums
Be In the Know