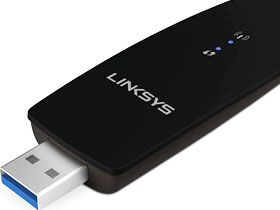 The Linksys WUSB6300 is a decent AC1200 USB Wi-Fi adapter. On one hand, the software was stable, and it was simple to set up. The speeds were acceptable across the various distances, and all of this was in a package smaller than any of the competition. Had it been the only adapter tested, I would have been satisfied with it.

USB-attached Wi-Fi adapters are incredibly convenient for hooking up to your local network wirelessly, and Linksys is one of the most prolific names in that segment. After being bought and integrated as a consumer division of Cisco, Linksys was then acquired by Belkin in 2013. Although Belkin also makes networking equipment, Linksys exists as a separate brand, making it one of the three under which Belkin sells its products (the other two are Belkin and WeMo).

As of this writing, the dual-band WUSB6300 is Linksys' fastest USB Wi-Fi adapter. It conforms to the 802.11ac standard, allowing it to function on both the 2.4GHz and 5GHz wireless frequencies; you choose the one that works best for your network. The WUSB6300 was one of the first AC1200 USB Wi-Fi adapters on the market, debuting in August 2013.

Although Linksys doesn't list Windows 10 as a supported OS, the adapter worked just fine on a notebook with Microsoft's latest. However, the pairing did present some challenges that we'll cover in more depth.

At first glance, Linksys' WUSB6300 looks like a typical USB Wi-Fi adapter. It is encased in black plastic and interfaces with your PC through a USB 3.0 port. It also has a button for connecting via Wi-Fi Protected Setup, a security shortcut that facilitates encrypted connections between your router and the device, obviating the need for manual configuration since the password is generated by the router. Just keep in mind that WPS is considered insecure and thus is not recommended; we also suggest disabling it through the router's settings.

The WUSB6300 does not have external antennas, but rather relies on two internal antennas. In addition, there is no bundled cradle or extension cable to optimize the signal.

What's In The Box?

The following items are included in the box:

Although the WUSB6300 is a standard AC1200 Wi-Fi adapter, it does have some features that set it apart. For one, it has the tapered, more organic shape seen in Cisco models before Linksys was acquired by Belkin. The design is a departure from the more common blocky shape utilized by most competitors. Also, while much of the competition employs a single indicator light, the USB6300 has two LEDs—the first for power/status, and the second for WPS/security. Unlike many other adapters, this one actually conveys useful information through its LEDs.

The WUSB6300's two LEDs provide quite a bit of useful info on the connectivity status of the adapter, provided that you know how to read them.

The WUSB6300 has a tapered shape and is more compact than some other adapters. It is the thinnest, shortest and lightest of the models we tested. However, the svelte dimensions impose certain limitations. Mainly, Linksys' design does not offer an external antenna, meaning there's no way to improve your connection to the router. As you'll see in an upcoming round-up of AC1200 USB Wi-Fi adapters, the highest-performing products are typically those with deployable antennas.

Starting on the right, labeled with a 1, is the USB 3.0 connector. Moving to the left and labeled with a 2 is a radio frequency shield that monopolizes almost half of the PCA. Underneath the shield are two 5GHz power amplifiers, two 2.4GHz and the main Wi-Fi controller, which is a Realtek RTL8812AU. A little farther to the left is the WPS button, labeled with a 3, and above that is a pair of LEDs marked with a 4. Finally, the number 5 designates the two internal antennas, which are integrated into the PCB.

In my experience, Linksys' networking products are easy to install, with software designed to walk beginners through the setup process. The configuration utility was last updated on July 14, 2015 to version 1027.5.0105.2015.

On a Windows 8.1 laptop, the software CD loads automatically, walking you through setup step by step. The whole process took less than five minutes. The install package takes up only 22MB, which is less than products from some other manufacturers.

We also wanted to test the software's compatibility with Windows 10. Although Linksys explicitly supports all versions of Windows from XP onward, Windows 10 is not yet part of that list. Admittedly, the process wasn't as smooth as we wanted it to be. The CD started to autoplay, but then the installation stalled. It was also frustrating that the Linksys support site only had bare drivers, making it more painful to manually install them. The alternative to using the software CD is Linksys' Connect Setup Software for PC, which can be downloaded here. This software got the adapter working in Windows 10 and, despite our initial issues, subsequently worked without any hiccups.

Once the software wizard was installed, the rest of the installation proceeded smoothly. The utility confirms the setup, shows available target networks, asks for a password and connects.  Both 2.4GHz and 5GHz networks are detected.

The adapter maintained a stable connection to our AC1200 router, and never dropped its link. The software is unobtrusive. Perhaps too much so. Unlike other manufacturers' utilities that sit in the system tray and, when clicked, display information, the Linksys software doesn't tell you anything about the connection or control any settings.

The Linksys WUSB6300 AC1200 Wireless USB 3.0 Adapter is widely available at a full retail price of $70, making it one of the more expensive AC1200 USB adapters. Amazon currently has it for a more competitive $37.99. The device carries a one-year warranty from Linksys.