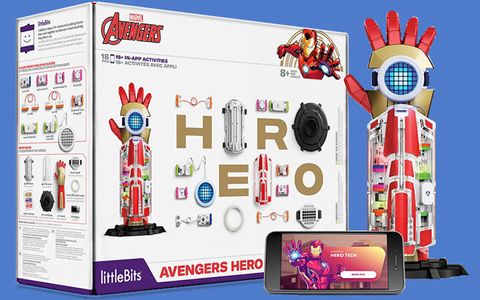 The littleBits Avengers Hero Inventor Kit teaches kids valuable STEM skills in an engaging way, but it's a little pricey.

You want to teach your kids about the wonderful world of circuits and electricity, but working with raw wires and boards is a pain in the butt, even for adults. It requires proper understanding of  the difference between positive and negative charges, and sometimes you need to solder (a dangerous proposition for young children). Easy enough for kids, but advanced enough for their parents to enjoy, the littleBits system uses a series of magnetically snappable bits that let you combine a battery, input sensors and output parts (lights, motors and sensors) into a working project.

The littleBits Avengers Hero Inventor Kit lets kids build a working super-powered gauntlet that you can program to react lights, vibrations or button presses. The hardware and associated mobile app are Marvel-themed with challenges that involve popular heroes such as Iron Man, the Hulk, Black Panther and Shuri. At $149, the Avengers Hero Inventor Kit doesn't come cheap, but it's a compelling STEM-learning tool for elementary school children.

What's In the Box?

The Avengers Hero Inventor Kit comes with all the parts necessary to build a wearable gauntlet.These include a plastic case with straps on it, a clear case cover, a 9V battery and TK "bits," the electronic pieces which snap together.

A single blue power bit with an on / off switch connects to the 9V battery. Three pink input bits -- a button, an accelerometer and a light sensor -- provide a means for your gauntlet to collect feedback from the wearer or the environment around them. The two green output bits are a speaker and a circular LED light with 45 pixels that can illuminate in different color patterns. There's also an orange Bluetooth LE bit for communicating with your mobile device and two orange extension cable bits that allow you to add some space between bits you wish to mount on opposite sides of the gauntlet.

There's also a plastic gauntlet stand that looks like one of Iron Man's arms. Much like a styrofoam head holds a wig, this arm can hold your device in place while you test it. However, there's no reason not to just put the gauntlet on your own arm (or someone else's) rather than hanging it on a stand.

To get started, you need to download the Hero Inventor app, which is available for Android or iOS, but sadly does not appear in Amazon's app store, making it impossible to use on a Fire tablet. The app walks you through a series of challenge sets it calls "stages," each themed around a particular superhero and their powers. Each stage has two to four challenges, some of which are "inventions," which require tearing down and rebuilding the gauntlet, and others that  are activities which ask you to program something or test out the device's powers.

There are a total of seven stages, each focusing on different super powers (aka capabilities of the gauntlet). The first stage is Iron Man-themed and revolves around the LED light. A set of step-by-step, well-illustrated instructions teaches you how to hook up the battery bit to the light bit and then add a button for turning it on and off. When the circuit is complete, the app shows you how to mount it in the gauntlet and slide the clear plastic cover over it.

The second, Ant-Man & The Wasp-themed stage teaches about the accelerometer bit and has you build a version of the gauntlet that reacts to movement. Stage 3, which uses Hulk iconography, introduces the speaker bit, followed by the Black Widow stage that focuses on the light sensor. Other stages are themed around Black Panther and Shuri.

Some of the challenges in later stages involve programming, using a simple block-based language. However, it's important to note that both the app itself and the code blocks have words on them so preliterate kids may have trouble doing the challenges without an adult.

littleBits also encourages children to get creative and make up their own caped crusader. Then, they can dress the gauntlet to match the powers and personality of their dreamed up superhero. We found some examples at the Fatherly's 100 Best Toys of 2018 showcase in New York City this December.

Like most kid-friendly STEM kits, the Avengers Hero Inventor Kit uses a block-based coding language. It's not a standard one like Scratch, but it follows the same principle of having blocks that you drag in from a toolbox on the left side of the screen and snap together on a canvas. For example, if you want to make a program that will keep playing the same sound over and over again, you would snap the Play Sound block into the Do Forever loop block.

Depending on the stage and activity you are in, the programming toolbox will have more or fewer available code categories, but even in its most basic form, there are a lot of options. There are different sets of blocks for Input / Output (what you get from the sensors), Timing (how long to wait or repeat an action), Loops, Logic, Math, Images (drawing on the LED screen), Text (appearing on the LED screen) and Sound (speaker output).

The app will step you through the process of building a program, telling you what blocks to use to achieve the desired result, but the good and bad news is that it doesn't check your work to make sure you did exactly what it asked. While some may wish the program would return an error message and say something like "hey, you need to drag this If / Then block over here," I like how it lets you experiment. Speaking of experimentation, the very last activity in the app, appropriately named Hero Creator Challenge, shows all of the available code blocks and encourages you to program whatever you want.

No matter what activity you are doing, there's no way to save the code you built for future use. Just like the gauntlet itself, which is meant to be torn down and rebuilt over and over again, the programs aren't meant to be permanent.

Simple Enough For a Six-Year-Old (Mostly)

littleBits markets the Hero Inventor Kit as being for ages eight and up, which equates to a second or third-grade child. However, my six-year-old son had no problem grasping the concepts as long as I helped him read the words. In fact, after a while, he was building, taking apart and rebuilding the gauntlet in different configurations all on his own.

Eventually, he didn't even need to open the app to make his gauntlet projects, because as long as you're not writing code and sending it to the Bluetooth module, you can just use the electronic bits. For example, he connected the power bit to the accelerometer bit and then the LED light bit to create a gauntlet that lights up when you shake it or jump up and down. If he added the Bluetooth bit and sent it a program, he could control exactly what the light shows and make it perform different behaviors based on what the accelerometer detects.

My son had a harder time grasping the programming activities by himself, because the blocks are text-based and some of the concepts on them are a bit advanced. One of the Input / Output block lets you perform an action if the "signal from input is" equal to, greater than or less than a certain percentage. But it's not clear even to this adult what a percentage of input signal would even mean when the input bit is an accelerometer or a button (for the light meter, I assume this block is asking how bright the room needs to be to trigger an action).

Also, the Timing blocks measure time in milliseconds rather than minutes or seconds. Older kids will probably understand that one second is 1,000 milliseconds, but, at  age six, this is a new concept for my son.

My son and I got through all the stages in a matter of a few hours. However, I was surprised to see him returning to the gauntlet over and over again, taking the bits out of it and rebuilding it in different ways. He also experimented by combining the littleBits bits from this kit with a motor from the company's Droid Inventor Kit, which we've also tested.

As a toy for just wearing around the house and playing superheroes, the kit falls flat. My son enjoyed showing off his gauntlet by wearing it after each build, but it's clear that the real purpose of littleBits' product is to build it again and again, not keep it in the same state.

Whether your child gets bored of taking it apart and putting it back together again after a few days is hard to determine. Clearly, if you have other littleBits pieces to add to the mix, it gets more interesting over time.

At $149, the littleBits Avengers Hero Inventor Kit isn't the most expensive STEM product out there, but it's definitely on the high end. The littleBits Droid Inventor Kit now goes for just $87 and gives you the parts to create, program and decorate a Star Wars astromech droid that can roll around the room. However, it doesn't have the same amount of sensors.

The Lego Boost kit, which lets you build and program half a dozen different types of robots costs $10 more and doesn't require any reading skills, but it has fewer sensors and teaches kids nothing about circuits. And the Wonder Workshop Dash, a highly programmable rolling robot,  costs $145, but you can't build it or take it apart.

If you want your child to get excited about building inventions while learning a little bit (pun intended) about circuitry and programming, the Avengers Hero Inventor Kit is a great choice. Parents with tighter budgets should consider the littleBits Droid Inventor kit. Those who are more interested in teaching programming concepts than circuit building can go for other STEM toys, such as the Lego Boost or Dash Robot. However, if you can afford the price, the littleBits Avengers Hero Inventor Kit offers a unique experience that will give your kid a real superpower, the power to build circuits.