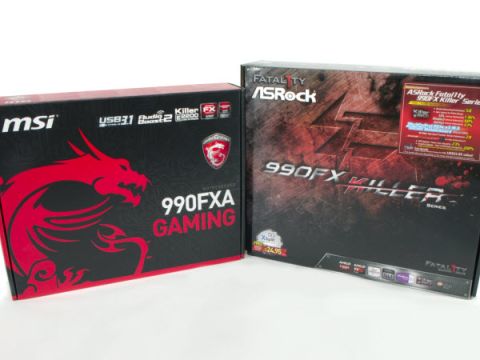 Solid performer and a decent overclocker. All-around good pick with room to grow.

Revisiting The 990FX With A Twist

After reviewing several smaller HTPC-oriented AMD boards, I was happy to get my next assignment. Though the previous boards were efficient, compact, and made my inner home-theater nerd delighted, I really wanted to flex my muscles and stress my test bench. The Tom's Hardware motherboard crew has the Intel roadmap pretty well covered, so it is with pleasure that I revisit the land of Advanced Micro Devices.

Today, I will be reviewing the 990FX chipset but, more importantly, ASRock and MSI's offerings to the gaming community. Having been an avid PC gamer for nearly two decades, I know how important it is to pick the right components to either gain a performance advantage or to enhance my gaming experience. Both of these products offer compelling features that will help make the purchase decision more difficult on both fronts. Not much has changed to the 990FX chipset since Thomas Soderstrom's previous review, but that hasn't stopped budget-minded builders from picking up this chipset. When packed together with an unlocked Black Edition processor, high-quality RAM and some high-value drives, users can allocate more funds for graphics muscle, peripherals or games (you know, that thing you install after you build the PC).

Given the flashy marketing labels, professional gamer endorsements and specifications that would make your head spin, I aim to cut the clutter of what could be a great foundation to a true gaming PC.

Having played some semi-pro (if you could even call it that) Counter-Strike back in the 2000s, it comes as no surprise to see Fatal1ty's name becoming a staple in the competitive gaming community. ASRock has branded this series of boards appropriately and brings a lot of features to the mix that help give either competitors an edge or make sure everyone is playing on the same level. Lag, noise and slow load times can definitely hinder performance and, more importantly, the enjoyment of gaming. ASRock's 990FX Killer aims to solve all of these trouble spots to deliver a great product.

Let's talk about the physical stuff. Measuring in at 12 x 9 and 5/8th inches (because I'm concerned it won't fit into your full-size ATX case), this board seems to give plenty of space for most building concerns. The back panel has access to two PS/2 ports, six USB 2.0, four USB 3.0, eSATA, a gigabit Ethernet, SPDIF and 5-port analog audio output. On board, we have access to two front panel USB2.0 headers, one USB3.0 header and a lonely USB3.0 connector. Speaking of high-speed serial connections, we also have four SATA3 ports connected to an angled connector and one port hanging out begging for an angled cable.

This board has several features that I find desirable for a high-end board. First, the PCIe connectors have latches that are similar to the DIMM latches that give a positive "click" when actuated, which helps in the removal and installation of expansion cards. Another great feature is the location of the fan headers; in a standard board installation, no fan header is more than a few inches away from where your fans would connect, which will help out with cable management. Finally, and most unique, is the M.2 PCIe SATA connector. This connector is tucked in between the first and second PCIe x16 connectors and gives the user a way to install directly attached solid-state storage to their system. This port enables users to use the new M.2 specification to gain additional bandwidth for high-speed SSD drives.

Beyond that, this board provides some of the standard connectors that we expect on a high-end board. Four 3-pin and two 4-pin fan headers are included to give you PWM control of CPU and chassis-exhaust fans and standard voltage for other attached fans. A full 24-pin ATX and 8-pin 12V connectors are available for power, and a SLI/Crossfire power connector at the bottom of the board round out the power connections. Top that off with some beefy heat sinks on the voltage regulators, north and south bridge, and you have one handsome motherboard.

Let's finish with features. One of the critical features ASRock attempts to kill is lag, and what better way to do that than to implement the Killer E2200 networking chip. Though both boards on the table today have a version of this controller, the ASRock board puts data on the forefront and claims 5x network performance and latency decreases of up to 136 percent in certain games. I don't test that in this review, but it does take up a lot of real estate on their packaging. Moving on, if streaming your gaming sessions is your thing (I'm looking at you FrankieOnPCin1080P), ASRock bundles a three-month license to XSplit Broadcaster with the motherboard that will help make streaming and recording a little bit easier. F-Stream, Fatal1ty Mouse Port, Purity Sound and "Gaming Armor" components help make this ASRock board ideal for any gamer out there.

When I picked up this package from the shipping box, I instantly thought "F-1 Racer." MSI definitely did a great job packaging this product and keeping the text and logos minimal in order to enhance that polished look. The packaging even had a definitive texture that felt top-shelf.

Just as the ASRock 990FX Killer, the 990FXA Gaming comes in at 12 x 9 and 5/8th inches but that's where the similarities end. The back panel has access to one PS/2 port, a gigabit Ethernet port, eight USB 2.0 and two USB 3.1 ports. For the audio department, SPDIF and six analog audio jacks finish off the connections. A nice detail that MSI adds here is that the actual faceplate is padded, which helps eliminate any gaps that might show up when mounting in a slightly out-of-spec case. Looking at the board, the bottom edge has access to three USB2.0 headers, one USB3.0 header and access to the front button headers. Along the right edge, six angled SATA3 connectors are hanging onto the edge along with one PWM fan header as well as a 3-pin fan header. Toward the top, the CPU PWM fan header is available and the DDR3 DIMM connectors only have latches on the topside. Installation will require the user to angle the DIMM in and only actuate one side. I liked the fanned look of the heat sinks on the regulators and northbridge, though they did make it more difficult to get accurate temperature readings.

Overall, this board just impressed me with how sharp it looked and felt. The board replicated that same texture that the box had, and I can't forget to mention the bright red LED that shows up underneath the Audio Boost circuitry on the bottom left of the board. My only criticism with this board is the fan header placement and that might be due to the configuration of my case. I feel this board would be better suited to cases that have the PSU mounted on the bottom of the case rather than the top.

From a feature set perspective, MSI has geared this product more toward a quality gaming experience. Teaming up with Creative Labs, the 990FXA Gaming board incorporates Sound Blaster Cinema 2 into the package for enhanced industry-leading audio quality. Couple that with MSI's Audio Boost 2 components and audio fidelity should be optimal. The Killer E2200 network controller is also present on this board so network traffic will be optimized for gaming. OC Genie and other MSI-bundled software round out the installation suite that enable this board to be a true performance contender.

Current page: Revisiting The 990FX With A Twist