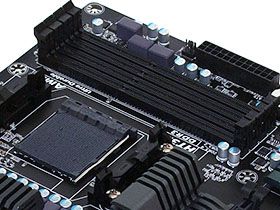 Day in and day out, you and I get hammered with a constant stream of press releases, record-setting attempts, and flowery marketing intended to get us thinking that one company's product is better than another's thanks to a truckload of features. Then we get asked, "How much more would you pay for that?"

Really, though, how many of us can afford a trio of top gaming cards? Who among us wants to configure eight 3 TB disks in RAID 10, and add an SSD boot drive for good measure? How many of us really need all of those features, and how many of us can use all of that performance we find so news-worthy?

AMD’s FX family sits at the opposite end of the price/performance scale from Intel’s Sandy Bridge-E-based Core i7s, yet it still offers the flexibility of 44 PCIe 2.0 lanes. That kind of room to upgrade lends itself to all kinds of low-cost future add-ons that you'll more easily be able to afford, since it didn't cost you an arm and a leg to buy the platform. The extra pathways even let you carry into your new system some of the stuff that made previous-gen builds so enjoyable and versatile, such as TV tuners, wireless networking, and high-end audio cards.

Some folks lament the fact that AMD isn't competing in the high-end space right now. We look at the company's combination of affordable CPUs and connectivity-rich chipsets as ideal for mid-budget builds, though. Marketing folks don't think that sort of talk is very sexy though, so we weren't entirely surprised that only three motherboard vendors expressed interest in sending us 990FX-based products to compare for a 2013 Socket AM3+ update.

Next Page ASRock 990FX Extreme9
87 Comments Comment from the forums