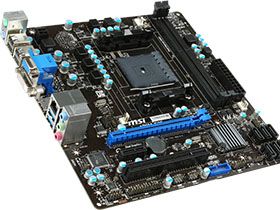 Since I have three comparisons going on within these charts, I will do my best to describe what the numbers mean and how those results reflect the different scenarios. Though the primary focus is comparing the A78-based boards, I also want to explore which platform might be best for a  particular budget and system configuration. Let’s jump in!

Both A78 boards demonstrate similar behavior, which is expected. With less than 1.0 percent variance between them in all three usage scenarios, it's safe to say that the components are configured properly. This also shows us that when I compare A78 to A88X or H81M, I do see a slight performance decrease, which could be attributed to memory performance and possibly APU limitations.

Again, I observe consistent results with the A78 boards, with the Whetstone Double AVX showing the largest deviation of 2.6 percent across all SiSoftware tests. It is interesting (though not entirely surprising) to see that the Intel platform has higher memory performance than A78 while using the same memory modules. Also, the AMD APU scores better than the dual-core Pentium G3258, though I did not quite get twice the performance.

Both A78 boards perform well when I compare them to the multi-threaded results from Intel. However, single-threaded performance is clearly better on the Pentium. It's also important to note that Intel’s multi-thread to single-thread ratio is 1.91 (close to two since it’s a dual-core processor), whereas AMD's ratio is 3.58, quite a way off from the ratio of four for a quad-core processor. This shows how important CPU architecture is.