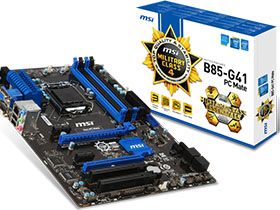 The results generated by MSI's B85-G41 PC Mate will be compared to those from the original three-board mini-ITX review I wrote, which you may read here. I continue to use those results because they represent three mainstream chipsets. As we've come to expect, though, performance differences are generally not remarkable. Please remember to subtract 6W from the power measurements, shown by the Kill-A-Watt meter, to get the actual system power usage (that 6W is needed for the UPS, not any part of the test systems).

As usual, an overclock to 4.2GHz will be compared to stock settings. Most, but not all G3258 CPUs should hit this (I have one that will not).

There is one notable difference in the results obtained with today's board: our RAM was not stable at DDR3-1400, so I had to leave it at DDR3-1333.

As you can see from this screenshot, the DRAM voltage is set to Auto. On my board, that resulted in 1.488V delivered to the memory, which is less than the kit's 1.5V rating. Unfortunately, manually setting it to 1.5V still resulted in an overclocking failure at DDR3-1400.

Based on a lesson learned in the last review, I went straight to the "Fixed" setting for all cores, hitting 4.2GHz straight away. That was easy. Perhaps too easy?

While trying to get the board to save screen shots, I discovered some unusual behavior. If I plugged the mouse and keyboard into the two USB 2.0 ports closest to the PS/2 connectors, the Board Explorer correctly identified them and any USB thumb drive on the USB 2.0 or 3.0 bus. But it wouldn't write to them, claiming none were present. If I plugged the keyboard and mouse into a different set of ports, the Board Explorer feature stopped recognizing the attached peripherals, even though they'd work in Windows.

Although the differences are not large, MSI's board does come out on top in all but two of PCMark's tests, even at relaxed memory data rates. Also, it is the previously-tested B85 sample that beats it. As before, your motherboard doesn't (or at least shouldn't) have a big impact on a PC's performance. It should, however, help facilitate stable operation at overclocked settings. In this case, overclocking provides a nice 10 to 14 percent boost.

Sandra tells the tale on the RAM. MSI's board finishes last, and overclocking doesn't help it catch up. Even then, the difference is small.

Only a tight scale conveys any difference here. Overclocking does enable some improvement from both drive types. The last board I benchmarked actually encountered a drop in USB performance when I overclocked it. Nothing like that happens today.

Let me know in the comments if you think this scale is too compressed. Despite the obvious difference in bar length, MSI's B85-G41 PC Mate is only four percent below the winner in the test's DX11 portion. It also enjoys the smallest improvement going from DX9 to DX11.

It looks like the boards based on Intel's B85 PCH slurp down more juice than the other mainstream platforms. The last B85-based motherboard demonstrated similar numbers, and the B85-G41 PC Mate is more conservative than that mini-ITX product. Overclocking adds 16 watts under a heavy CPU load like Prime95, but much less otherwise, and none at idle.

CPU temperatures follow a similar pattern as the other B85-based board we tested, although the CPU generally runs a little warmer on MSI's B85-G41 PC Mate. The previous B85 platform hit 77 degrees Celsius when overclocked, while this one tops out at 78.

I still think that Intel's B85 PCH offers the extra ports and features needed to make builders forget all about H81. This board, however, is an unusual example. Its dual CPU fans and eight-pin CPU power connector make me think it was designed for workhouse business or professional machines. Even though overclocking typically isn't used in environments where absolute stability is needed, heat sinks on the VRMs also suggest that the B85-G41 PC Mate is meant to be ridden hard.

For that premium market, a $75 price tag is not unreasonable. For everyone else, though, there are better choices out there.

Although I haven't given up on RAM overclocking through MSI's B85-G41 PC Mate, clearly it'll require more effort than I believe is appropriate for the target demographic, especially at this price. Other boards in this segment are more flexible, and many are cheaper.