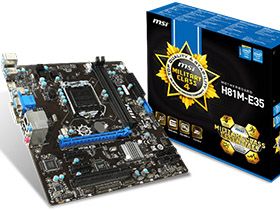 As is typical for this price range, the H81M-E35 V2 includes minimal accessories. You get the board, a compact manual, a driver CD, an I/O shield and a couple of SATA 6Gb/s cables. As usual, we'll mention that another cable would have been nice, though that's not a significant omission at this price point.

We didn't care much for the manual. It is tiny, measuring a mere 4x6 inches, and you can forget about it staying open to a page. The font looks like eight-point type. Eight languages are covered, including English, French, German, Russian and four other Asian languages, but not Spanish or Dutch. The manual appears to contain a suitable amount of information for a board of this class, but a separate sheet with a much larger image of the front panel (and possibly other) connectors might have been helpful.

The board's layout is logical enough. The only obvious blockage we saw was the first PCIe x1 slot, which would be covered by a dual-slot video card. This is common though, so it's really not an issue. If you need multiple expansion slots, perhaps a full ATX board would be more appropriate for your application. Similarly, a long enthusiast-oriented graphics card (which we don't think would be a natural fit for this low-cost motherboard anyway) might overlap the SATA 6Gb/s ports. They face forward though, so they wouldn't be rendered unusable. If you use cables with clips on them, both clips will face up, so you need to remove the top cable to get to the one below it. Nothing blocks the CR2032 battery, and pin headers are reachable and mostly near edges. The one that isn't, a fan header, would most likely be used with a rear-facing fan, presenting no need to route cables across the board.

There is plenty of room between the RAM slots and the back of a graphics card, allowing the latches to be opened without clearance issues. The CLRCMOS1 header does not include a jumper block. It's on the other side of the chipset rather than being near the battery, but is readily accessible. The four-pin CPU power cable is near the right edge, with nothing between it and the edge that would interfere with cable management. All capacitors are solid, and chokes are a type of ferrite core that MSI calls "Dark Chokes". The front-panel header is in its usual place on the bottom-left, and there is a speaker header there as well so you can hear BIOS error beeps if you plug a speaker in. The audio header is in the back-left, and it isn't right up against anything that would make access difficult. Missing are any LEDs on the board, including +5VSB or diagnostic indicators. Just be extra sure you've switched your PSU off or unplugged it before adding or removing expansion cards.

Current page: In The Box