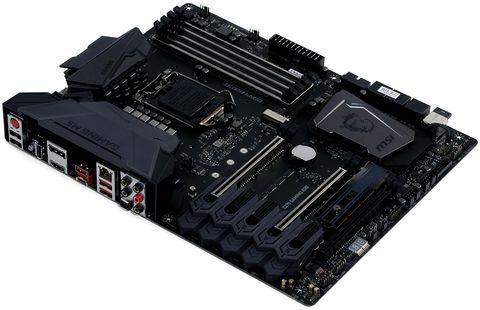 Is a platform launch by any other name still as exciting? Intel’s Kaby Lake brings a higher level of performance to the desktop and promises longer battery life in notebooks, but most enthusiasts will point out that it’s not actually a new platform because there hasn’t been a hardware redesign. Intel calls this the Optimize phase of the newly-coined "Process-Architecture-Optimize" sequence.

We’re told that optimized transistor design has allowed Intel to push for a little more frequency on the desktop, and a little less voltage in notebooks, and we saw the effects on overclocking in our performance preview well ahead of Kaby Lake's official launch.

It appears that there isn’t much that's new in the Z270 chipset design either. In fact, the headline change — four additional PCIe 3.0 lanes — were rumored to have been hidden in the Z170 before the elder silicon launched. Although we’re still leaning on a four-lane DMI 3.0 PCH-to-CPU interconnect, the popularity of four-lane NVMe drives keeps manufacturers searching for ways to avoid sacrificing other device connections in favor of storage. Each PCIe lane consumes an HSIO resource, so the Z270 expands this to 30 connections.

While that adds up to only 18 of the available 24 lanes, the maximum of 30 HSIO devices keeps those other six lanes from being used. That's because PCIe 3.0, SATA 6Gb/s, and USB 3.0 are all HSIO devices. We find six SATA 6Gb/s ports and six USB 3.0 ports consuming 12 HSIO resources. Adding the 18 dedicated PCIe pathways to those 12 non-PCIe ports, and we reach HSIO's 30-pathway limit. Skip the PCIe x4 slot, you’re done.

That’s not to say the Z270 Gaming M5’s PCIe x4 slot doesn’t exist, only that it uses the same resources as its U.2 controller. Users whose M.2 NVMe drive came with a PCIe adapter can far more easily use the bottom PCIe slot than the U.2 interface, and still reach the motherboard’s three NVMe drive limit by also using both M.2 slots. But users who were hoping to use the bottom slot and U.2 interface simultaneously will be a little frustrated.

The Z270 Gaming M5 has two USB 3.1 Gen 2 (aka, real USB 3.1) ports on the rear panel, in addition to two USB 3.0 (aka, USB 3.1 Gen 1) and three USB 2.0 ports. We’ve seen complaints from a few readers about the prevalence of USB 2.0 on I/O panels, but these are still perfect for things like keyboards, mice, and printers. Besides, we’d rather have them than not, since faster ports are counted against HSIO resources.

There's also a PS/2 port, which comes in handy for accessing firmware via ancient keyboards prior to USB initialization, five stereo audio jacks, a digital optical audio jack, an RJ45 jack for Gigabit Ethernet, HDMI and DisplayPort, and a CLR_CMOS button. One of the USB 3.1 ports has the modern Type-C connector. The upright USB 2.0 port serves a secondary function for MSI’s new BIOS Flashback+, which allows the firmware to be updated using only a flash drive and the computer’s power supply.

MSI is quite excited about its M.2 shield heat spreader, but we’re more excited about that row of four two-lane PCIe switches that convert the silver slots from x16-x0 to x8-x8 modes whenever a card is placed in the lower of those two slots. That, along with a firmware hook, makes the Gaming M5 SLI compatible. The Port 80 style diagnostics display is similarly pleasing because it allows experienced users to diagnose boot problems, which often happen when a device has been overclocked too far. Simpler than looking up POST codes, MSI’s EZ Debug LED includes four lights next to the DIMM slots to show BOOT, VGA, DRAM, and CPU initialization. Oh, and if you’re not impressed yet, the Gaming M5 also has an RGB lighted heat sink covering its Z270 PCH.

Header placement is mostly acceptable, though the front-panel audio header is shoved pretty far into the bottom rear corner. USB 3.0 headers face forward (parallel) along the front edge and outward (perpendicular) along the bottom edge, which could give builders one more excuse not to put a graphics card in the Z270 Gaming M5’s bottom slot. Four of the six fan headers are conveniently placed around the CPU socket, and one of those four is rated at 2 amps to support high-capacity liquid-cooling pumps. The other two fan headers are located on the bottom edge next to the numeric POST code display.

Last but not least, the button to enable BIOS Flashback+ (on the previously-mentioned I/O panel USB port) is located above the forward most DIMM slot.

Next Page Accessories, Firmware And Overclocking
26 Comments Comment from the forums
Be In the Know