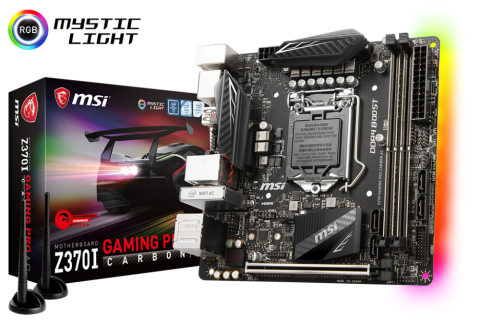 The Z370I Gaming Pro Carbon AC faces off with no less than four competing models, three of which are full ATX. Bigger boards have more features, but nobody said they needed to have more performance.

“Enhanced Turbo” overclocks interrupt Intel’s basic Turbo Boost scheme to instead use the maximum turbo ratio regardless of the number of cores stressed. We disable any such overclocks, and enable available power-saving features, in order to retain the CPU's intended efficiency.

Core i7-8700K specification requires the CPU ratio to drop from 47X to 44X when increasing the load from one core to six. The foreground image shows that the Z370I Gaming Pro Carbon AC correspondingly drops the CPU core voltage in an attempt to maximize efficiency, which we don't always see in its competitor’s products. The background image shows a different issue, that the board also limits CPU current to Intel’s 140W TDP: Since nobody else does that, we “uncapped” its settings during our power test. All of the CPU’s other power-savings features remain enabled on every model and test in today’s comparison.

Because enabling XMP memory mode has prevented us from disabling Turbo Boost “Enhancements” on previous products, we use SPD defaults throughout performance tests. The competing Z370N WiFi increased our memory’s DDR4-2133 timings from 15-15-15-36 to 15-19-19-39, hindering its performance in several test suites.

The Z370I Gaming Pro Carbon AC occasionally wins a few of our PCMark and 3DMark tests, but Sandra shows that it’s not due to overclocking. Falling behind in Sandra’s memory-intense Cryptography test is a result of its lower memory bandwidth, which in turn is a result of its use of only two memory modules. The big boards were tested with four modules, the modules are single-rank, and Intel’s memory controller works best with at least four ranks of memory deployed.

The balance of synthetic benchmarks shows that there aren’t many places where the performance difference between four-ranks and two-ranks of memory are easily seen. We’ve mostly noticed the difference at our lower game settings: Allons-y!

Nahimic Audio Solution includes a map of where your opponents are based upon the noises they’ve made. I guess they could also throw things to distract you, but the point today is that the compatible game, Talos, takes a performance hit when it’s enabled. The patterned marks on the charts show the score with Nahimic disabled.

The Z370I Gaming Pro Carbon AC performs well in timed applications, but doesn’t win any of them. Winning these is a task best left to its big brother, the Z370 Godlike Gaming.

One of MSI’s competitors is going to get very frustrated over the Z370I Gaming Pro Carbon AC’s power numbers and ask us if we forgot to increase its power to allow 4.40 GHz operation with six cores loaded. No, we didn’t. Default power limits originally dropped its maximum continuous draw to 127W under 12 threads of Prime95 small-FFTs, and likewise drops its frequency to 4.00 GHz to keep it within that envelope. The watts shown are the 4.40 GHz numbers.

. . . and greater efficiency. The Z370I Gaming Pro Carbon AC performed at 0.2% below the average of all five Z370 motherboards, but drew 15.1% less power in the average of idle and full load.

My boss recently reminded me that in order for readers to follow the math, they must use 100% baselines. That just means adding a 1 (100%) to all the percentages shown . . . or starting from the top.

Memory is the only place the Z370I Gaming Pro Carbon AC wins in overclocking. Everything else is a tie with the winning boards.

The Z370I Gaming Pro Carbon AC can’t catch its big brother in memory bandwidth, because that board had four modules installed. The situation may have been reversed if dual-rank modules were used, because the performance increase from four to eight ranks is far less than the performance increase from two to four ranks. This is all theoretical until someone builds a set of dual-rank DIMMs that operate at DDR4-4176.

From a features standpoint the Z370N WiFi walks all over the Z370I Gaming Pro Carbon AC, but a performance-to-price chart can’t reflect its addition of a second Gigabit Ethernet controller, a third fan connector, a seventh USB port (couldn’t we get eight?), improved onboard graphics outputs, or a second M.2 port. Heck, the Z370I Gaming Pro Carbon AC doesn’t even support legacy SATA M.2 modules, which means some users will need to start from scratch rather than upgrade, and it’s not like the extra connection would have required an additional controller.

I’m not one to pay for features I’m not getting, and I probably wouldn’t buy a board that supported only one M.2 module and one case fan. I accept there are those that will. And the Z370I Gaming Pro Carbon AC works so well, it just might be their perfect choice.