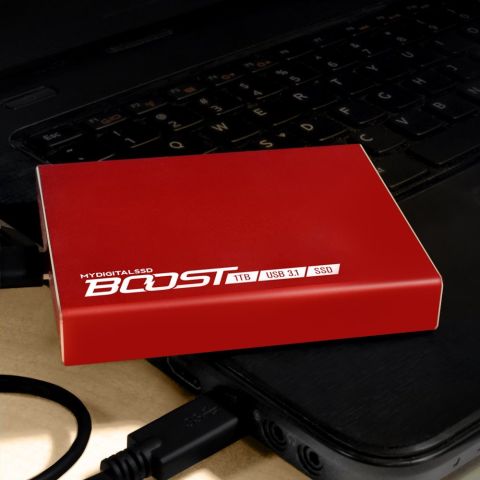 We pulled out two of our first portable SSDs to compare to the MyDigitalSSD Boost. The Samsung T3 2TB is a high-performance model, but it’s restricted to USB 3.0 performance. It's high-performance V-NAND still makes it a strong option for those looking for a speedy experience in a small package.

The SanDisk Extreme 900 Portable SSD is the other high-performance model that, on paper, should be slightly faster than the preloaded Boost. The 900 is a little larger and a little heavier.

Two more flash-based portable SSDs made our list. We loved the Adata SD700 in our review, and it features Micron's 384Gbit TLC flash. The SanDisk Extreme 510 is also a TLC-based model.

The LaCie Rugged RAID with two hard disk drives in a predefined RAID 0 array is the only disk-based model in this review. The Rugged features USB 3.1 and Thunderbolt II connections, but we tested the drive with USB like the other products in this review.

The 4KB through 16KB performance is nearly identical for all of the drives. The SanDisk Extreme 900 is slightly faster with small block reads and writes, and also scales faster than many of the other drives as we increase the transfer size. The MyDigitalSSD Boost 1TB also scales well with larger blocks. There is a nasty dip in both 512KB reads and writes that we can't explain.

The MyDigitalSSD Boost delivers the highest read and write performance across the full LBA range with 128KB sequential blocks. The drive squeaks by the SanDisk Extreme 900 Portable SSD in throughput, but the performance is slightly less consistent. The Extreme 900 had a sizable dip around the 75-percent mark, which was amplified during the write test. All the SSDs feature support for the TRIM command to keep the flash clean when you delete data, but the command is just a recommendation from the host system that the drive can ignore or push back to a later time. If the command completes successfully, it should keep write performance high and reduce extreme performance drops.

We don't run many synthetic tests on external or portable storage products because the typical workload is sequential in nature. Even though it is possible, users don't run operating systems on these drives. The typical use case is very basic. Most of us simply read and write large pieces of data for archiving or transferring from one location to another.

We often see performance measured in throughput, but most people would rarely say, "Wow, that transfer was really fast—I bet it was doing at least 150 MB/s." Time-based results are easier to interpret because the sense of time is universal.

We tested with the Avatar (2D + 3D Edition) Blu-ray. We used rFactor from the post-installation directory (C:/Program Files) for the Game directory. The Directory Test is a 15.2GB block of data I modeled for another project several years ago. It comes from a daily-use notebook and contains a mix of images, software installations, ISO files, and multimedia that yields a nice real-world workload.

It's rare for one drive to win all three real-world file transfer tests. To date, the MyDigitalSSD Boost is the only model to accomplish this achievement. It makes us wonder why Samsung didn't produce a high-performance portable SSD with RAID instead of focusing on a compact design.

Could it really be that easy? MyDigitalSSD designed an aluminum box with a fairly standard bridge chip, loaded it with mainstream SSDs and walks away with the fastest portable SSD on the market. Apparently, it was just that easy.

As a DIY enthusiast, I have to commend MyDigitalSSD for releasing the Boost as both a fully developed and bring-your-own-disk device. It's important not to overlook the value of the loaded Boost 1TB. At the time of writing, it's the lowest priced 1TB-class portable SSD at both Newegg and Amazon. It ships with older but effective Samsung 3-bit per cell (TLC) planar NAND, but it's still higher quality than what we've seen on many of the new portable SSD products. Samsung has a large flash technology lead, so moving back a generation is still a step forward compared to many of the other portable SSDs we've examined. This also helps MyDigitalSSD keep the price down.

If you want something more modern, MyDigitalSSD offers the Boost as a standalone enclosure. You could add your own mSATA SSD from a previous build or go for the gold with two 850 EVO mSATA SSDs. The price would shoot up significantly in quick order, but it would allow for a Boost 2TB. There should also be a slight performance increase with random data, but for the most part, it would still be better for large sequential transfers.

The unsung hero is the additional layer of protection from running RAID 1. We've seen this feature included in some RAID hard disk drive products, but most often, the systems focus on RAID 0 to increase performance. RAID 1 divides the available data capacity and performance but gives users two copies of the same data. For some, the data integrity is worth the lower performance and capacity reduction. It's another tool, should you choose to use it or not.

The MyDigitalSSD Boost is an excellent product if you require high-performance portable storage. It's not as refined as the Samsung T3 or as rugged as the Adata SD700, but it's faster than both and is a better value. The Boost is what I would call a purse or backpack-sized portable SSD. It's not something you want to carry in the pocket of your jeans. It's just a little too large for that, but it will fit in a coat or jacket pocket.

The Boost is a storage product and not a backup-focused drive that ships with automation software. You can purchase backup software or use the Microsoft tools built into Windows. Some portable SSDs come with advanced software for backup, encryption, and other bells and whistles. The Boost doesn't ship with those, so keep that in mind if your needs go beyond the tools built into your operating system.

Those are the only two detracting points with this product. Overall, we liked the design, its simplicity, and most of all, it's value and performance.