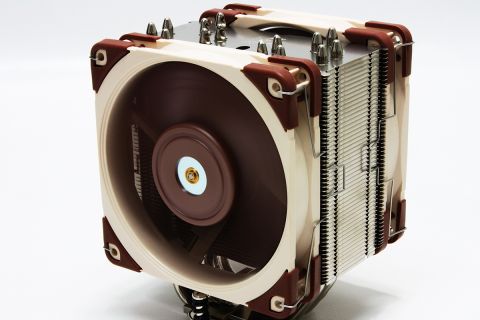 Premium cooling and unique presentation often dictates a premium price. The Noctua NH-U12A certainly checks each of those boxes, providing formidable thermal performance and a signature look, with a price tag of $100

Long revered for quality heatpipe air coolers and well-regarded fans, Noctua has recently added another stallion to its stable of cooling solutions with the NH-U12A.  The dual-120 mm-fan tower cooler features a pair of Noctua’s NF-A12 fans in their signature brown-and-tan color palette to push / pull ambient air through a polished set of seven nickel-plated copper heatpipes, while remaining quiet enough to power a home theater PC and appease the audiophile sitting next to it.

Noctua ships the NH-U12A with mounting hardware to accommodate most current AMD and Intel processors, save for AMD’s Threadripper (TR4) platform. The usual collection of mounting brackets, backplate and standoffs accompanies a set of PWM extensions, an angled Phillips screwdriver and a tube of Noctua NT-H1 thermal compound.  An adhesive-backed metal Noctua case badge rounds out the goodies provided from the accessory box.

The workhorse of the NH-U12A is the stack of cooling tower fins which are soldered to the seven nickel plated heatpipes which collect at the cooler base as part of an integrated mounting base with spring-tensioning screws.  Heatpipes are offset to evenly distribute thermal load while also allowing airflow around them.

The base of the NH-U12A features a polished, nickel-plated base plate that provides a large mating surface to accommodate the entire surface of your CPU of choice. The sides of the cooling tower features a closed design to tunnel the airflow directly through the fin stack.

Noctua ships a pair of NF-A12 fans rated up to 2,000 RPM that get secured to the cooling tower with simple wire-spring clips that snap over side grooves of the cooling fins. The 120mm PWM fans prominently feature Noctua’s signature brown and tan color scheme, and they can run independently or with the included fan splitter to manage them as a pair.

Installation of the cooling tower is managed independently of the 120mm fans, which are clipped to the front and rear of the Noctua NH-U12A once the base is secured. The cooling base is slightly offset toward the front, so that the entire cooler avoids interfering with memory kits with tall heat spreaders.