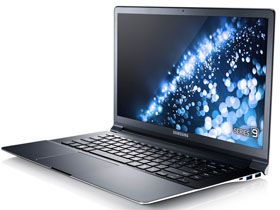 Maybe that's because Samsung figured out that calling something an Ultrabook isn't as specific as Intel might have once envisioned. With a range of specs covering different-sized screens, it's getting harder to see the brand's cachet.

What we do know is that the Series 9's .5" thickness is less than the MacBook Air's .68", and its 2.55 pounds is less than Apple's 2.96. A higher-res 1600x900 display favors Samsung, as does the inclusion of a wired gigabit Ethernet dongle. Those specs mean something. Unfortunately, so does the 13.3" Series 9's $1700 price tag, which is a couple hundred bucks higher than the system that really established this segment (albeit with a 1.8 GHz Core i7, rather than Samsung's 1.9 GHz chip).

Price gap aside, after one week of constant use, we can confidently state that Samsung has, for the most part, nailed its design. We like the enclosure's matte finish, which doesn't attract that greasy film you see on more polished chassis.

Further attention to detail is seen in the Series 9's SD card slot, which is covered by a door that tucks in when you have flash media inserted. The door closes neatly with nothing inserted, maintaining the notebook's clean lines. Beats the heck out of some of the systems we've seen with easily-lost dummy cards plugging up media access interfaces.

Although the rest of Samsung's physical implementation is great, we aren't as bullish on the keyboard or touchpad. The chiclet-style keys are nice-looking, but they don't convey the feeling of authority you get from banging away on a desktop keyboard. Very little pressure is needed to activate a keystroke, so it's easy to mistype with more frequency. If you make this your primary system (rather than switching back and forth between a desktop), you might find it easier to adapt.

The touchpad, on the other hand, is more difficult to excuse. Its right and left mouse buttons are built into the surface of the pad, which is supposed to give you more room for cursor movement and multi-finger gestures. The mechanism is confusing, though, because the bottom 80% of the touchpad depresses. However, only the lower 20% generates a right- or left-click action. We've seen this from Apple's MacBook Pro, but in OS X, you're really only dealing with a single right-click. Windows, on the other hand, involves regular use of both mouse buttons. It doesn't help that the click is pretty shallow, making the touchpad even more ornery.

Today's review focuses on the 13.3" Series 9 NP900X3C-A04US. The larger 15" model shares the same keyboard and touchpad. As far as appearances go, the larger system boasts bigger speakers on each side of the keyboard, while the 13.3" model relocates them to the bottom of notebook.

A larger chassis and beefier battery contribute to the 15" versions higher weight. However, its dimensions still qualify it as an Ultrabook, according to Intel's spec.

Next Page Series 9 Processor Performance: Mobile Ivy Bridge Delivers
33 Comments Comment from the forums
Be In the Know