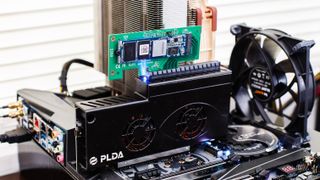 The debut of AMD's Ryzen 3000 series processors brings the industry's first PCIe 4.0 platform to market, promising more available bandwidth for all PCIe devices, like GPUs and storage. But do we really need a new faster interface and up to 5GB/s of blistering throughput from the latest SSDs, especially given the premiums associated with stepping up to PCIe 4.0-equipped X570 platforms? We've got Phison's new PCIe 4.0 reference SSD, which is the same design as the leading wave of new SSDs to hit the market, in our labs to find out.

Storage is an obvious use-case that can benefit from the doubled throughput of the faster interface. Flash has redefined storage, but the once-revolutionary technology easily outstripped the bandwidth limitations of the 6Gb/s SATA interface long ago. That led to the migration to the PCIe interface and the speedy NVMe protocol, but now the latest flash devices saturate the PCIe 3.0 x4 interface, too, and a flash glut has led to rock-bottom pricing, meaning you can score stupid-fast SSDs on the cheap.

But what if you want more? AMD has its PCIe 4.0 Navi graphics cards coming to market in tandem with the X570 chipset, but we don't expect the wider PCIe 4.0 pipe to impact GPU gaming performance much. The trick is to feed that pipe with faster data transfers, and that's where the new line of PCIe 4.0 SSDs will step in.

From entry-level SATA controllers to high-end NVMe controllers, Phison has made big strides in SSD controllers over the past four years, and now we have third-party SSDs that can compete with the likes of Samsung, WD, and Intel, but are less hurtful to our wallets.

We've been tracking progress on Phison's latest NVMe controller, the first PCIe 4.0 model on the market, for the last few months. Phison designed the PS5016-E16, better known as the E16, to power some of the fastest SSDs on the market. A few companies, such as Corsair, Gigabyte, Patriot, and a few others have announced Phison E16-powered SSDs and will have products out once available later this year, and we expect the second wave of products to come in the future.

That means our sample, which is a reference Phison PCIe 4.0 SSD design, is nearly exactly the same as the first PCIe 4.0 SSDs that will come to market soon. We had the rare opportunity to test this SSD with a special $20,000 PCIe adapter to see how the increased performance impacts real-world workloads.

The Beginning of a New Era

PCIe is the fastest widely-used storage interconnect on modern motherboards. By slapping in a new NVMe SSD, you can hit speeds of upwards of 3.5GB/s over the PCIe 3.0 x4 interface. However, AMD’s new X570 chipset paired with Ryzen 3000 CPUs will open up the PCIe 4.0 interface, starting a new race to the top when it comes to enthusiast-class storage performance.

The new interface enables more flexible lane width configurations and speed selection and doubles the potential bandwidth, which is huge. This means that we will see up to ~2GB/s per PCIe lane as opposed to the ~1 GB/s we see with the PCIe 3.0 interface. PCIe 4.0 carries over the same 128b/130b encoding as PCIe 3.0, so we won't lose most of the bandwidth to protocol overhead. Once NAND and controller designs improve, we may see SSDs hit upwards of ~8 GB/s (each direction) of throughput, or more.

Phison has always been rather fast to market with its controllers, and this time around is no exception. At CES 2019, Phison showed off early PCIe 4.0 SSD engineering samples running at ~4GB/s speeds when paired with Toshiba BiCS3 64-Layer TLC flash, but the flash actually slowed the controller down: At the time, Phison said it could hit ~4.8 GB/s with faster flash.

Phison developed the E16 with newer 3D TLC and QLC flash in mind. The chip supports eight NAND channels with 32 chip enables (CE) at up to 800 MT/s speeds, enabling up to 2TB of total capacity. The E12 can theoretically support up to 8TB of flash, but without enough demand for such hefty SSDs, Phison optimized its latest controller with support for mainstream capacities.

The sample we have in our lab today features firmware revision EGFM10E3 and Toshiba’s BiCS4 96-Layer TLC flash that has unlocked even more performance than Phison initially hoped for. With the new memory and a few more firmware optimizations in place, the E16 can now reach speeds of 5 GB/s read and 4.4GB/s write. That's record-breaking for a tiny M.2 device.

The E16 is built on a 28nm process node, just like the E12 before it. Actually, the E12 and E16 are very similar. Phison built the E16 on the E12’s design, so features like end-to-end data protection and thermal monitoring are included. The E16 controller supports AES-256, TCG OPAL 2.0 and Pyrite encryption features as well as S.M.A.R.T. data reporting, Trim, and the Format NVMe command to securely wipe data. In essence, the controller uses the E12's back end paired with a faster PCIe 4.0 PHY, Phison’s 4th Gen LDPC ECC engine, and some improved NAND IP. So, while the PHY is new, there aren't a lot of changes to compute capabilities: Most of the innovation is in the code.

Because Phison built the E16 on the E12 foundation, the PCB design is basically the same, too. Our double-sided 1TB M.2 2280 form factor sample looks the same as current SSDs in the market, except for one thing: just like Silicon Motion, we see that Phison now places a nickel finish on the controller to help with heat dissipation. This is a great addition to see, but, hopefully, vendors will do away with the engineering sample’s blue PCB.

As mentioned earlier, our sample came with Toshiba’s 96-Layer BiCS4 TLC flash. Products 1TB and under will feature 256Gbit die, while 2TB products will feature 512Gbit die. BiCS4 enables a boost in performance over BiCS3, and, based on Gigabyte's marketed 3,600 TBW endurance for their 2TB Aorus NVMe, endurance figures have slightly improved over the E12’s max support for up to 3,120 TBW of endurance. That could also be partially due to the fourth-Gen LDPC engine, too.

Considering there aren’t any consumer PCIe 4.0 systems on the market at the time of writing, testing one of these bad boys seemed rather impossible. That is until we pulled some strings and happened to come across a $20,000 Gen4HOST add-in card from PLDA. What does this AiC do? Basically, it converts our PCIe 3.0 x16 slot on the host system to a PCIe 4.0 x8 connection that communicates with PCIe 4.0 endpoints. This type of board is used for development and validation, just as we are going to validate performance here today.