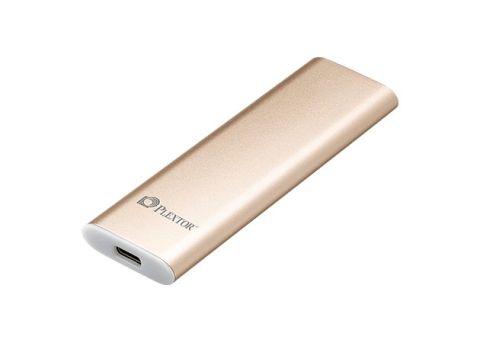 The Plextor EX1 uses a superior USB Type-C connector and includes nice value-adds, but legacy technology paired with a cost shaving, and performance killing, older controller holds this product back. Plextor could have chosen better hardware that lives up to the image the company wants to project.

Plextor combined two new product categories to create its new low-cost EX1 portable SSD. The portable SSD category isn't new, but the low-cost models came to market in late 2016. Around that time, portable SSDs took on new shapes as the components inside shrank.

The drive is very slim and fashionable. It comes in either gold or Plextor's Titanium Silver and weighs just 30 grams. The EX1 features the new USB Type-C connector for easy connectivity, and electrically it takes advantage of the 3.1 Generation 2 specification for up to 10GB/s at the host connector. The internal drive uses a SATA 6Gb/s interface, so the Type 2 interface gives you the benefit of an unblocked connection. USB 3.1 Gen 1, like USB 3.0, connects the devices at 5Gb/s.

The Plextor EX1 goes beyond the PC and supports Android's OTG technology with a compatible partition. You will also need to purchase a USB cable that supports your device because Plextor doesn't bundle one with the EX1. Many of us experience issues with limited phone storage because picture and video recording quality are so high, but the EX1 is an easy solution to the problem.

We do know the drive ships in three capacities that range from 128GB to 512GB. Plextor claims the EX1 series is capable of up to 550/500 MB/s of sequential read/write throughput. The company didn't list performance specifications by capacity, so we expect both to deliver nearly identical results. We only have the 128GB model to test.

The drive is not as small as the Samsung Portable SSD T5, but it is very slim and weighs just 30 grams. The drive has a long slender design that is slightly wider than the M.2 2280 SSD specification. Plextor didn't release many details about the controller or flash.

The Plextor EX1 128GB we're testing has an MSRP of just $69.99. The 256GB model retails for $109.99 and the 512GB model, the largest in the series, costs $189.99. The drives carry a commendable five-year warranty. Many portable SSDs, including the newly released Samsung Portable SSD T5, only carry a three-year warranty.

Plextor includes a key for the downloadable Fnet SecureDrive EX2 software. The software allows you to create a password and make separate partitions for secure and insecure data.

The management software loads on the insecure partition, so you don't have to download the application from the Plextor website every time you connect it to a new computer. This is a nice value-add feature. We've tested other products that ship with software encryption, but the number has dwindled as companies move to lower prices rather than better value.

Plextor sent the gold EX1. The design is a throwback to the M6 Pro's Champagne color. This was a very popular color in Asia, particularly in Japan, for many years. Older home audio components with the brushed aluminum champagne color are highly sought after.

Inside the package, we found a carrying pack, USB 3.0 Type-A to Type-C cable, warranty paperwork, and a code for installing the Fnet encryption software.

The drive itself is a long slender design that is both functional and attractive. It's thin enough to fit in your pocket without discomfort and light enough for you to forget it's there.