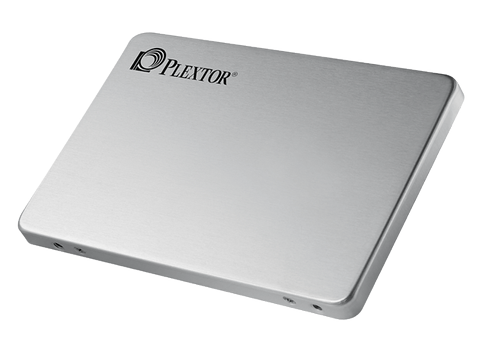 Plextor keeps trying to make it in the consumer SSD market, but it faces stiff competition from larger companies with more resources. To stand out from the crowd, Plextor turned to unique advanced software features. The M7V does not feature a 1TB-class product, and we found that disappointing. Over time, we may see more firmware updates that address the high latency issue and increase performance.

Plextor has had a rough time with its products, and its performance in product reviews, over the past few years. The last consumer SSD from the company to receive high praise was the M5 Pro, which the company released in 2013. The Plextor 6-series SSDs suffered from firmware and latency issues that kept enthusiasts away, but the company hopes the new 7-series will restore trust in its brand and win back its former customers.

The M7V offers up to 560/520 MB/s of sequential read/write throughput, and up to 98,000/84,000 random read/write IOPS, which places it within the range of competing SSDs, so on the surface, it appears promising.

Unfortunately, the Plextor 7-series will have a short life. The company canceled the M7e PCIe SSD late last year, and it just released a new NVMe SSD with MP8-series branding. The 7-Series lacks the companion products that round out a "good, better, best" product stack strategy, so the M7V and M7V M.2 may be the only 7-series products to ship.

At Computex 2014, we began to see Plextor shift from enthusiast-focused products to focus on enabling value-added software features. The strategy worked for the company nearly two decades ago (wow, it's been that long) when bit-by-bit disk-image cloning circumvented the copy protection schemes of the time. Most power users had not one, but two or more Plextor CDR optical drives installed in large tower computers.

Plextor debuted the M7V more than a year ago, but the entry-level SSD only recently began to ship. It features the late-to-market Marvell Dean 4-channel controller, which apparently delayed products from several vendors. In the last month, five new low-cost and mainstream SSDs have shipped with this controller, but the performance of the new products is a mixed bag, at best. Two of the products received firmware updates within the first month of availability, and the Plextor M7V is already on its third firmware release. Rapid-fire firmware updates aren't ideal, but at least the company is proactive and quick to address issues as they appear.

Plextor released the M7V in 128GB, 256GB and 512GB capacities, and some retailers also carry the M7V special edition in a bright red case. The red SSDs carry a premium over the standard drive, which comes in a natural brushed aluminum finish, but the performance specifications and capacities are the same. Plextor already released the M7V series in an M.2 2280 model, but it still uses the SATA 6Gb/s interface.

Performance data from Plextor comes with an "Up To" prefix, and the M7V series uses Toshiba 15nm Toggle Mode TLC flash with an SLC buffer.  The 512GB model we tested has a native TLC 128KB sequential write speed of 210 MB/s, which we discovered during our testing, but the SLC buffer increases write performance for short, bursty write traffic. The two largest models share the same high-performance specifications, but the 128GB model loses some of its reputed performance due to fewer available flash packages for parallel operations.

A Marvell Dean 4-channel controller is at the heart of the M7V. The controller uses low-density parity check (LDPC) code to increase the endurance of the Toshiba 15nm TLC. LDPC and other powerful error correcting technologies are becoming increasingly important because less-endurant types of flash, such as TLC, have an increasing number of errors with each lithography shrink. LDPC is much stronger than the older BCH error correction code used with MLC flash, and clever error correction techniques allow TLC SSDs to deliver enough endurance to meet (or exceed) the warranty period of the drive.

The M7V is one of Plextor's lowest-cost SSDs to date; the 128GB drive starts at just $48.99, followed by the 256GB at $69.99, and the 512GB we are testing retails for $129.99. In the past, the company was known for its enthusiast-class products, which doesn't exactly imply friendly price points, so this is the first time we've had a Plextor product be truly cost-competitive with entry-level SSDs.

Plextor limited the M7V, which carries a three-year warranty, with a total bytes written clause, which means that you void the warranty if you write more data than the specification allows. The 128GB model comes with an endurance rating of 80 TBW, the 256GB with 160 TBW and the 512GB offers a 320 TBW rating. The in-box accessory package is nonexistent, but you can download Plextor's strong software package, which we recently covered.

PlexTool software allows you to monitor, secure erase and manage Plextor SSDs. The software lets you update firmware automatically by connecting to Plextor servers, which is a convenient feature compared to some updating methods that require you to determine the firmware revision and then download the update before applying it.

Plextor's PlexVault software aims to provide a hidden and secure partition on the SSD, and it gives you complete control of access privileges. Even if you share a computer with others, you can still store your private data via PlexVault, and it will remain hidden on the computer as long as the computer has the Plextor SSD installed. You can create multiple hidden partitions that you can open with user-configured hotkeys.

The SSD's storage capacity is always a key point of consideration. Plextor's PlexCompressor uses custom, smart compression technology that gives you more storage capacity without affecting system performance. The software detects old and infrequently used files on the storage volume and silently compresses them in the background, which returns usable space to the SSD. Additional free space on the SSD increases performance and the feature uses standard NTFS-based compression, so the data is safe. The company also provides a real-time tool to monitor progress.

PlexTurbo is an intelligent SSD caching solution that uses system RAM to accelerate SSD performance, and it boosts the service life of the SSD, too. The software automatically adjusts the amount of RAM that it allocates to the SSD, and it will return memory capacity back to you during heavy use. PlexTurbo also allows you to specify the upper limit of RAM capacity to use for caching, and you can adjust the intervals between data dumps. Plextor recommends that you have at least 32GB of RAM in your system to use the feature.