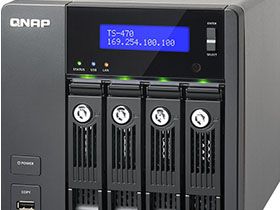 Gigabit Ethernet With Room To Grow

Most small and home office network-attached storage appliances are fairly similar in the feature sets and performance they offer at relatively comparable prices. So, what extras might you expect if you spend a little more on something higher-end? We recently received QNAP's TS-470, which falls into the category of a more feature-rich, but also pricier unit. At its heart is a Sandy Bridge-based Intel Celeron G550, a 2.6 GHz dual-core processor with a maximum TDP of 65 W and on-board HD Graphics able to hit 1 GHz. QNAP attaches 2 GB of DDR3 memory to the Celeron, which can be expanded to as much as 16 GB.

But those specs aren't what makes the TS-470 noteworthy. Rather, it's the appliance's four gigabit Ethernet ports, two of which are enabled through an expansion card, that make it different. And if GbE isn't enough for you, the add-in card can be swapped out for a 10 GbE option. With link aggregation enabled, QNAP claims you can get up to 432 MB/s writes and 450 MB/s reads. Or, with the 10 GbE board, writes should be able to hit 1.67 GB/s with reads topping out at 1.7 GB/s.

Naturally, hitting those rates requires the right storage devices. But you can expand the TS-470's capacity up to 144 TB by adding as many as 36 additional disk drives.

While you ponder the possibilities of that much storage, bear in mind that this NAS unit also sports an HDMI output. What's that good for? A direct connection to your TV, serving as a media server? Or how about in a medium-sized business, streaming video presentations into the board room? Frankly, most of would probably prefer to keep our servers and theaters separated by more than just an HDMI cable. However, video output is becoming an increasingly common feature, too.