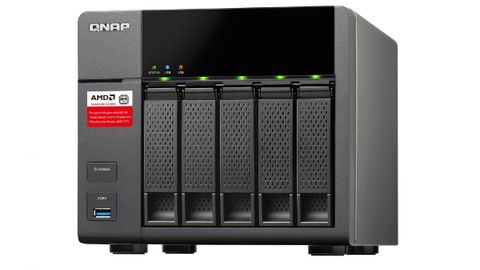 Our trace-based tests employ real-world software that most of us use on our PCs or network appliances. The SMB benchmarks illustrate data transfer performance when you copy and paste files to a NAS.

There is enough data here that you should be able to identify the most applicable transfer types and isolate the products that best suit your needs.

The multi-client test uses 10 dual Xeon servers, each loaded with two Hot Lava Shasta six-port network adapters. Each server runs 12 virtualized Windows 7 installations that run a script of Microsoft Office applications. One of these scripts isn't enough to saturate a gigabit Ethernet connection, but as the number of clients increases, so does the load. Also, adding clients changes the workload. Sequential transfers from multiple sources quickly become random in nature as the device being tested receives the data.

The data is presented two ways. A throughput chart shows the aggregated transfers to the system. But the latency chart is arguably more important, since it's indicative of the experience you get from a device communicating with the NAS.

QNAP's TS-563 performs well under the heavy multi-client load. Surprisingly, it even outperforms the Asustor AS7004T. That appliance uses a different caching algorithm, which usually allows it to best the competition. AMD's G-series SoC in the TS-563 clearly means business.

Unlike SMB connections, iSCSI requires that you enable the protocol and configure shares on both the storage appliance and host PC. If you use your NAS as a secondary drive (with its own drive letter), then iSCSI is the best way to connect. Random transfers are usually significantly faster, and you can even use thin provisioning on the NAS. This only consumes whatever capacity that your system requests. Performance generally rivals a hard drive inside your PC, but the data is held on a redundant array, so it's theoretically safer.

Of course, different companies use different iSCSI code, so a system with high SMB transfer rates won't always achieve great iSCSI performance. QNAP utilizes efficient iSCSI code, and its TS-563 stays in the top half of every test in this section. Interestingly, there is a lot of variation in the results from competing appliances. You can read more about the workloads here.

One 7200 RPM Western Digital Black 6TB in a PC delivers nearly 16 MB/s of bandwidth. The TS-563 gets close to this over an iSCSI network using 5400 RPM Seagate NAS HDDs in RAID 5. QNAP's TS-563 outperforms the other products in iSCSI desktop workloads using real-world software traces.

Traditional server traces have been around for nearly a decade; they're a staple for evaluating performance. And these days, most network-attached appliances have built-in Web, email and database server applications.

The AS7004T's faster processor and cache algorithm help that system outperform the other products we're comparing. Of the platforms with low-power SoCs, QNAP's TS-563 enjoys the lead. Granted, most of these tests are very specialized, and few companies will employ a pedestal NAS for the workloads in a dedicated role. Still, the results show what is possible.