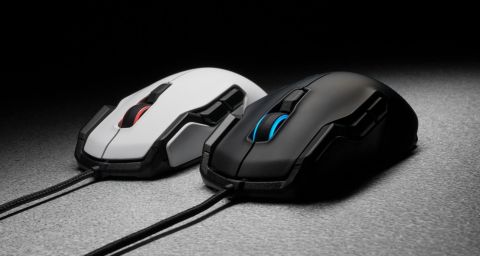 A good gaming mouse for the price, the Roccat Kova Aimo is a no-nonsense pointer with an attractive but understated aesthetic.

While some gaming mice value an armada of buttons and lights above all else, the Roccat Kova AIMO is a peripheral that’s far more understated in its original design. At first glance, this pixel pointer, might lead you to think it’s just a regular, boring, budget mouse, but it’d be unwise to judge this book by its cover. The Kova AIMO is a powerful ambidextrous gaming mouse that offers enough customization options to appeal to a wide spectrum of PC enthusiasts, no matter what genre they play, or what hand they use.

Right now, you can pick up a Kova AIMO for around $50 (£53) and that relatively-affordable price explains a lot of the decisions Roccat made when developing this mouse. We’ll touch more on that later. Yet it’s important to know that this price tag sets this mouse’s sights directly on the heady heights of two of our favourites, the Logitech Classic MX518, and the SteelSeries Sensei 310, both of which are top entries in our best gaming mice list.

The design of the Roccat Kova Aimo isn’t quite as eye catching as other gaming peripherals. Recently Roccat has stepped away from its traditional stylings, and instead produced some great gaming devices that utilize what the company calls "industrial design," a no-nonsense look that is smart, minimalist, and gets the job done.

Because the Roccat Kova AIMO sets out to be ambidextrous, the layout of the mouse is symmetrical. You’ll find, aside from the usual left click, right click, and scroll wheel buttons, you also have access to two quick fire buttons to the sides of the main left and right click switches, followed by two thumb located buttons (you know, the ones usually allocated to forward and backwards options on internet browsers) on each side of the mouse, and a single DPI button below the scroll wheel. All are well within reach of those with average sized hands, no matter which one, left or right, you use to control the mouse.

Gaming peripherals are no strangers to the world of the whacky when it comes to outlandish aesthetic decisions, so it’s a nice change of pace to see something as simple and as elegant as the Kova AIMO. It’s still undeniably a gaming mouse, it still features those cliche aggressive angles, and now almost obligatory RGB lighting, but thankfully all of that doesn’t come at the expense of comfort. Hell, you could even get away with using it in an office environment if you so desired.

Roccat has shown that it’s perfectly capable of producing an over-the-top looking gaming mouse with the Roccat Kone Aimo, but to be honest, we prefer the look of the Kova here.

As for comfort? We used the mouse for hours on end, both in-game and for our day-to-day tasks at work, and the dulcet ache of that journalistic induced RSI was kept at bay with ease. At 99g, the mouse doesn't put a strain on your wrist nor does it feel too light and insubstantial that you’re about to accidentally embed it in your screen with one wrong flick. It’s a solidly-built gaming mouse that feels like it will last a good time as your go-to pointer.

The braided cable that connects the mouse to your system of choice is a nice touch too, and it’s long enough to allow it to be used with PCs placed on the floor or away from the desk. If the black color looks a bit too boring, it also comes in an optic white finish as well, and the RGB lighting, which illuminates the scroll wheel, as well as a strip across the back of the mouse, can be configured using Roccat’s Swarm software too – although more on that in a bit.

Out of the box performance with the Kova is pretty solid. It’s a good experience, even if you don’t have the time or inclination to tweak the settings on this thing. As far as precision goes, in World of Warcraft, there was little jitter, or lag, when playing that big ol unit frame healing game, and overall the experience was pleasant, we didn’t notice we were using it at times, and that’s high praise in those kind of situations. One thing we would say is that the left click and right click buttons do feel a bit heavier compared to our trusty Corsair M60 Pro, but it wasn’t enough that anyone died in our Mythic dungeon runs.

Overall it felt fast and responsive, across MMOs and RTS titles alike, although for those after something for FPS games you might want to consider that slightly slower click time as a negative. The DPI switch below the scroll wheel is also a bit of a mixed bag when it comes to sensitivity. It’s handy to have when you need to drop to something slower quickly for that perfect headshot in Apex.

However as standard there’s five DPI profiles enabled, and only one button meaning each time you press it you have to then cycle through the other four, unless you configure it in Roccat’s Swarm software ahead of time and disable the other profiles. This is compacted by the fact that it’s all too easy to hit that DPI button by accident, if you’re pressing the scroll wheel button.

As for the other switches, the buttons along the side do need a decent click to register. While this might feel a little awkward at first, we appreciated it, as we’ve used too many gaming mice that have sensitive side buttons that can be all-to-easily clicked by mistake.

While the out-of-the-box experience of the Roccat Kova Aimo is very good, you’d be doing the mouse a great disservice (and yourself, at that rate) if you didn’t delve into Roccat’s Swarm software.

Roccat's Swarm software, which requires both a reboot and two different downloads to install, lets you configure the look, feel and performance of the Kova Aimo.  You can finely tune the five DPI levels from between 250 to 7000 DPI, which you can then switch among using the DPI button. You can set the Windows pointer speed and configure the 10 mouse buttons, with the option to give each one a secondary assignment when a modifier key is applied.

The Swarm software lets you switch the polling rate among 125, 250, 500 and 1000 Hz rates. You can add audio feedback here and configure all the RGB lighting effects.  You can also  save up to five profiles with different settings, a great feature when you're playing different games.

The Kova Aimo's ambidextrous design, combined with a simple aesthetic, and impressive software suite make it an impressive competitor for those looking for a solid, jack-of-all trades mouse. However, outside of the software level customization (something that’s available on any gaming mouse within Roccat’s lineup), you can't modify the gaming experience. You can’t add more weight for instance, or swap out the cable to something smoother, and there’s no hot swappable sensors or anything along those lines either, but for some people that level of configuration isn't necessary.

What the Roccat Kova AIMO does offer is an easy, plug and play experience, for those looking for a no fuss, pixel pointer, that’ll get the job done. For this price point, it's a very compelling choice.