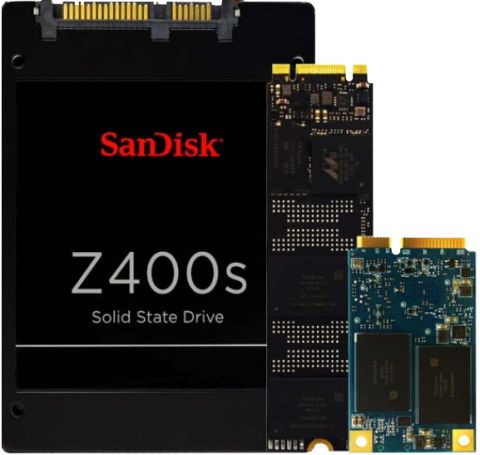 Over the last several weeks, we published reviews of low-cost SSDs from a handful of manufacturers. All of them were 256GB-class or larger. We rarely test 128GB-class drives anymore, but we did have a few products that'd compare well to the Z400s. Both of the Adata drives are new and part of the low-performance, low-cost SSD revolution. And Samsung's 850 EVO is a high-performance SSD that sells for a low price. Granted, none of the comparison products sell for the $.25/GB we originally paid for our 128GB Z400s, but they're all cheaper than the Z400s 128GB at the time of writing.

Right off the bat, the Z400s comes out strong in our sequential read test. The DRAM-less drive even outperforms Samsung's 850 EVO 120GB, which is widely regarded as the best low-cost SSD on the market.

It was fun while it lasted. DRAM keeps the table map data cached for quick updates on where the drive is physically putting data on the flash. Placing the table on slower NAND diminishes its ability to write quickly.

Notice that the Z400s delivers higher sequential numbers than Adata's SP550. This is because the SP550 uses TLC NAND and leans on a small sliver of emulated SLC to mask that technology's native performance.

Any operation involving random data is slow on the Z400s. SanDisk's 15nm MLC flash can't make up for the lack of high-speed DRAM, even compared to TLC-based SSDs. At low queue depths, where performance really matters, the Z400s isn't that much slower than the 120GB SP550, though.

The Adata SP550 and SanDisk Z400s are evenly matched in measures of random 4KB writes. But both drives show up at around half of the SX930's and 850 EVO's data rates.