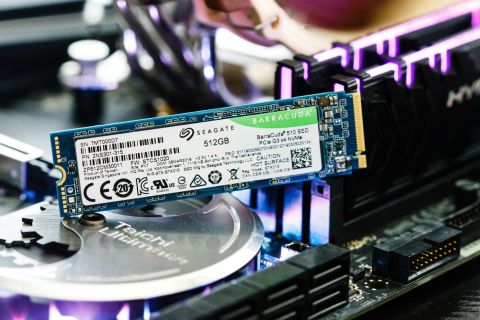 Seagate’s BarraCuda 510 is a decent SSD with plenty of performance to keep up with the normal day to day office applications as well as creative work, and good power efficiency, too. With a five-year warranty and endurance to cover most peoples’ needs, it has what it takes to be a good buy, but day-one MSRPs are a bit too high.

Seagate's new BarraCuda 510 M.2 SSD comes in two capacities of 256GB and 512GB, and while the size and capacity of these SSDs are small, performance is anything but. With speeds of up to 3.4/2.1 GB/s read/write, the BarraCuda 510 can deliver that snappy user experience you crave, and then some.

Seagate is a brand that is much more well known for its hard drives than its SSDs. For the company, SSDs haven’t been a big area of concern until recently. Now HDD sales are sinking, but to keep afloat amidst these rough seas, Seagate is looking to some fishy-branded SSDs for help. It’s latest products, the BarraCuda 510 and FireCuda 510 have been swimming about on its social media since CES, but neither of these SSDs has been available until now.

The BarraCuda and FireCuda are Seagate's response to WD’s Blue and Black NVMe SSDs. Instead of offering two distinct products, with one being a high-end performance model and the other being an entry-level device, Seagate has taken another approach. The company split the same product into two, separating them based on capacity and thus price, as well as a few other minor points. Therefore, the BarraCuda 510 series receives mainstream branding, encompassing the cheaper and lower capacities in their product line, while the FireCuda 510 series takes on enthusiast class/gaming branding, encompassing the pricier and higher capacity models.

These SSDs offer faster performance than any SATA drive could dream of, and they come in a small M.2 form factor. But, while they are new to Seagate, the design isn’t quite new to the market. While some manufacturers have taken the burden upon themselves to develop every aspect of their SSDs in-house, Seagate has opted for the easy route here.

The BarraCuda and FireCuda are manufactured using Phison’s tried-and-true E12 NVMe SSD controller rather than a drive with the company's own IP. The same goes for the Toshiba BiCS3 TLC NAND. We've seen this combination before, so there shouldn’t be any surprises during testing: overall performance should be along the lines of what we have seen in the past with similarly-built SSDs.

With such high write speed, endurance has to be high enough to handle what you can throw at it over the years. The five-year warranty covers up to 160 TBW (terabytes written) at the 256GB capacity and 320 TBW at the 512GB capacity. Other Phison-equipped SSDs come with twice the endurance rating, though.

MSRPs come in at $70 for the 256GB model and $110 for the 512GB model, which is almost twice the price of competing SSDs. Seagate’s BarraCuda 510 also supports TRIM and S.M.A.R.T. data reporting, as well as the ability to secure erase with the company's SeaChest Utilities. The drive also supports hardware encryption if you purchase the TCG Opal-compliant SKU.

Our sample came to us without any accessories, but you can download support software for the BarraCuda 510 from Seagate’s website. For basic monitoring, you can use SeaTools SSD GUI. With it, you can view S.M.A.R.T. data as well as other useful details about your drive. You can also download DiscWizard. This software is basically Acronis True Image HD, but a streamlined free option for Seagate to port over to their customers. You can use it for basic cloning and system imaging, but more advanced features are disabled.

Seagate’s BarraCuda 510 comes in a single-sided M.2 2280 form factor, meaning it has all PCB components laid out on one side. The blue PCB and the white and green sticker don’t add anything positive to the aesthetics, but what really matters most is what's underneath.

The BarraCuda 510 features Phison’s E12 PCIe 3.0 x4 NVMe 1.3 SSD controller, but unlike most, this one is stamped as Seagate’s own. There is a 512MB DDR4 DRAM cache for the FTL caching and two Toshiba BiCS3 NAND packages for storage. Once formatted, the drive exposes 476GB of usable capacity.

Next Page 512GB Performance Results
Be In the Know